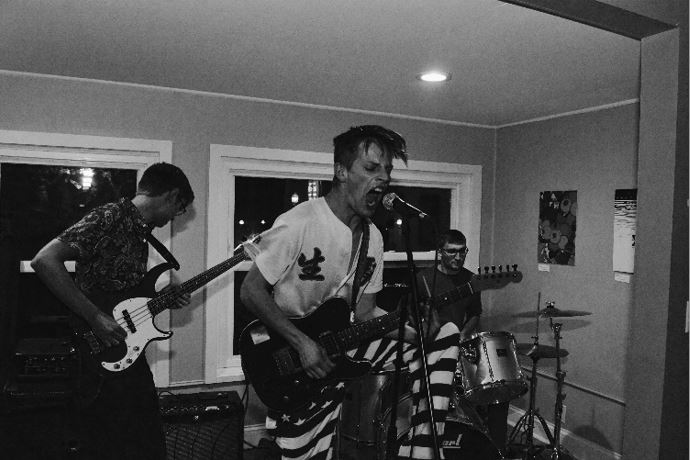 On Tuesday, Sept. 1, a crowd of 50-60 people spread out along the lawn and sidewalks outside of the Peter White Public Library’s entrance where the The Flat Broke Blues Band played on the front steps. Some homeowners even watched from their yards across the street, waving when the lead singer, Lorrie Hayes, pointed them out in acknowledgment.

The performance, co-sponsored by the Marquette Blues Society, was part of the monthly Bluesday Tuesday series. It was held outdoors—as have several music acts at the library this summer due to the COVID-19 crisis.

The live music scene has been quieter than usual since the start of the pandemic, affecting local musicians around Marquette who rely primarily on house shows and local venues for places to play. Despite this, bands and venues are finding ways to adapt to a new COVID-conscious scene.

“Ever since COVID-19 there’s been nothing,” said guitarist and NMU alumni Tatum Shiebler. “We’re so used to having houses to play at and having a show at least once a month.”

They all agreed that COVID-19 has affected Marquette’s music scene significantly, especially for younger bands that are just starting out and don’t feel comfortable playing at bigger venues yet. They expressed the importance of keeping the music scene alive for future bands.

“We’re going to be leaving soon, and somebody has to be there next to get those incoming, new people to play,” said Cameron Iverson, bass player and senior English major. “It’s a cycle—we’re playing music because we watched other people and saw it was possible.”

The Rumpus Room will be playing its first show since March on Saturday, Sept. 26 at the Shoreline Theatre, NMU’s new outdoor venue, for a Black Lives Matter event. The event will be held from noon-6 p.m. and information regarding tickets will be posted online in the upcoming weeks.

“With COVID-19, live music is up in the air for the radio,” Raasch said. “We haven’t made an official decision for the station whether or not we want to play live music, but we have plans for the future.”

Next semester the radio has intentions to add a new media element for their live shows. Raasch envisions new light and visual elements added to the station, as well as videographers coming to film the bands. Their goal is to have every band who plays at the station leave with a well-edited video to present and showcase to others.

Sam Miess, a senior biology major, said playing live music has been challenging for his band Shipwreck Kelly since the pandemic.

“It’s hard, that’s what I like doing the most with music is performing it more so than writing it,” Miess said. “I’ve been focusing a lot more on my solo stuff.”

The bar opened its back patio for live music this summer, recently adding a tent and lights for guests to enjoy a cozy atmosphere outside. Live music is played there every week with an open jam night every Thursday and Sunday.

“What I like about Marquette is that the music scene is so diverse and the community is supportive of all of it. No matter what it is, if people hear live music they’re there,” Miess said. “It’d be a shame if that disappeared because there’s not a lot of places like that out there.”