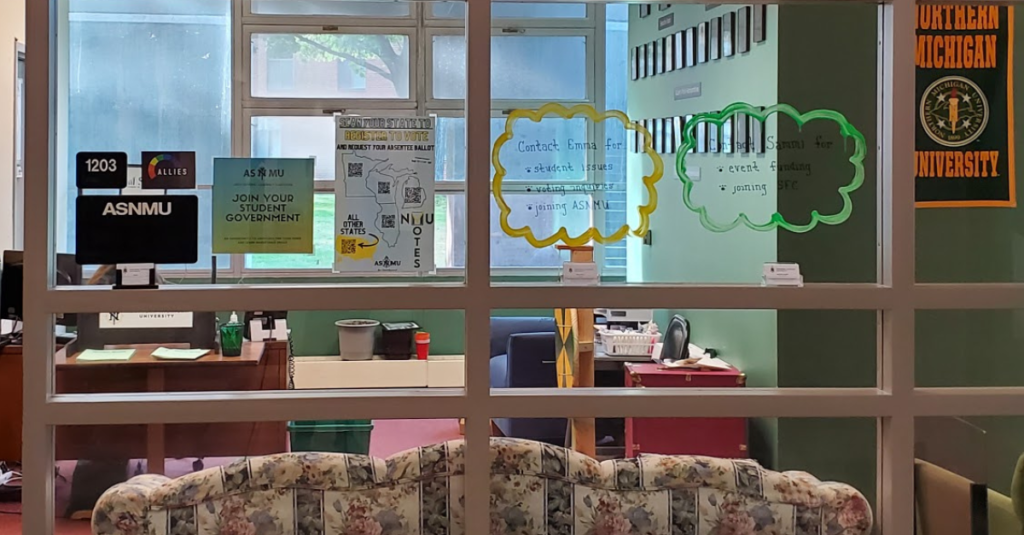 Pictured above is the ASNMU office, located in the Northern Center. Kelby Reichard/NW

ASNMU, NMU’s student body government, has charged the creation of a Constitutional Convention committee to discuss rewriting the organization’s constitution to make it more applicable to the structure of ASNMU.

Currently, ASNMU is structured around three main branches: the General Assembly, the Student Finance Committee and the Judiciary Committee. Jim Gadzinski, an advisor for ASNMU, said that a new constitution could improve the organization by condensing the number of branches and committees.

“What we would be looking to do would be to streamline down from a large, three branch organization to a smaller, more nimble governing body,” wrote Gadzinski. “If we become more efficient we could take on more projects for the good of the student body.”

Gadzinski also clarified the process that will be needed to ratify this new constitution.

“If changes are enacted … the GA must first approve, and then any new constitution or by-laws need to be ratified by the Board of Trustees and the President,” wrote Gadzinski.

Gadzinski said this about ASNMU’s diversity and inclusivity, “ASNMU needs to grow into an organization that is more efficient, effective and visible for the entire student body.  As effectiveness increases, so would respect for the organization, prompting more students to become involved.”

Gadzinski stated that the idea to form a new constitution has been debated within ASNMU in the past.

“We have been tossing around ideas for reorganizing ASNMU’s structure for the past two years,” he said. “This effort is designed to allow ASNMU to take a hard look at itself and hopefully maximize positives [and] eliminate negatives.”

All NMU students may apply to be on this committee, which will meet regularly to work towards writing a new constitution that is more effective for ASNMU.

As stated in the committee’s charge (the official proposal for the creation of the committee) the Constitutional Convention will consist of five voting members and an unlimited number of additional members who can attend and voice their thoughts but will not have voting power. The charge also states that the new committee will report to the General Assembly of ASNMU from “time to time.” The goal end date for the new constitution is April 2021.

Emma Drever, president of ASNMU, said a new constitution could be beneficial to the organization for multiple reasons.

“We’re just trying to create a structure that represents our students more accurately, and assess the needs of our student body better,” Drever stated. She also added that the current constitution has become outdated and needs to be updated.

According to Drever, the Appointments Committee is targeting specific students for the Constitutional Convention, but seats on the committee are open to everyone.

“We’re hoping to focus on poli-sci students … as well as resident advisors,” she said. “Those are the two that we wanted to focus on, but really anyone who is interested is welcome to apply.”

Drever stated that she wants this new constitution to be more relevant to the way in which all areas of ASNMU function.

“If I were on this committee, I would say that we needed to complete a list of all of the things that we wanted to cover like year to year … and then write a structure that reflects that,” she said.

Drever also added that the new constitution could potentially update practices like using Robert’s Rules of Order (a manual that states how to conduct parliamentary procedure) or standardizing some of the voting requirements needed to pass certain policies.