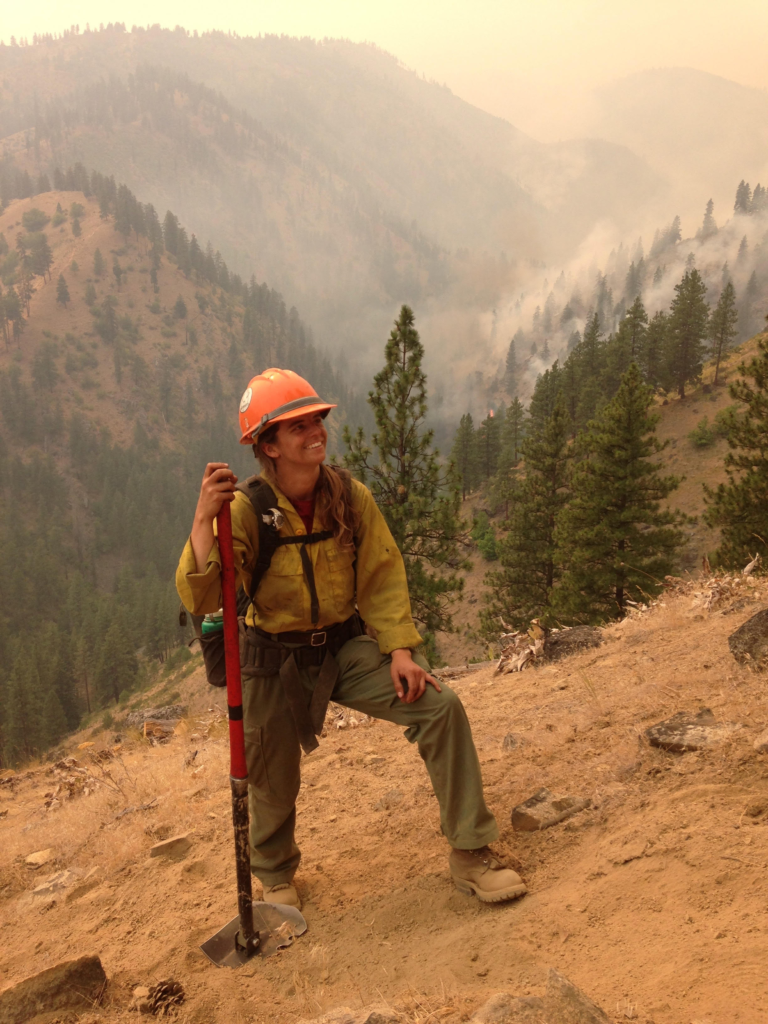 Amanda Monthei graduated from NMU in 2013. She majored in English with a focus on nonfiction, and a minor in journalism. In 2016, she developed an interest in firefighting. She returned to NMU for a semester of firefighting classes before moving west and working as a wildland firefighter for the US Forest Service for four summers. Her personal website lists an extensive wildland fire resume. She received firsthand experience with wildland fire while working as a member of a hotshot crew, and has also written about fire and her articles have been in multiple publications. Now, Monthei has combined her passion for storytelling and wildland fire in her new podcast, “Living With Fire.”

“I kind of started realizing that there wasn’t a lot of high-quality coverage of wildland fire,” Monthei said. “I was posting on my Instagram and trying to share some blog posts about the perspective of working on the ground during fire season. I found an audience doing that.”

Monthei originally pitched several stories about wildland fire to a magazine, but she felt the publication was too restrictive on the stories she wanted to tell. A friend suggested a podcast might offer her more creative liberty. Monthei thought the idea was perfect and launched “Living With Fire” in August of this year.

“Our objective is to explore the role that fire plays in the landscapes out west which is a pretty critical role and a role that a lot of people don’t understand on a very deep level,” she said.

The podcast has explored prescribed fire, which is a forest management technique that utilizes fire to its advantage. During prescribed burning, fire is started and controlled while it burns away large amounts of potential fuel such as dry vegetation. Allowing burning in a controlled environment reduces the chance that an unintentional fire will spread.

Other episodes of “Living With Fire” have discussed ecology and the history of wildland fire and firefighting.

Monthei hopes to expand the scope of the podcast to discuss how other countries deal with wildland fire. She would also like to interview various people who have a strong relationship with fire, such as firefighters and Indigenous people who practice cultural burning.

Because Monthei interviews experts, the language used can be technical and advanced. She is working to break this barrier and make the podcast accessible to everyone.

“I would like it to be something that anybody, with any level of interest in fire, can listen to and actually learn something,” she said.

“Living With Fire” can be found on most major podcast platforms, including Apple Podcasts, Google Podcasts and Spotify.

To learn more about Monthei go to https://www.amandamonthei.com/. For more information about about wildland fire from the US Forest Service, visit https://www.fs.usda.gov/managing-land/fire.

The Firecats is a student organization that was founded in response to the discontinuation of NMU’s wildland firefighting program in 2018. Andre Brown is a senior environmental science major with a concentration in natural resources. Brown founded the Firecats with another student and still serves as its president.  The club is a resource for students to get involved in wildland firefighting.

“The hiring process, at least with the federal government, is pretty confusing and the learning curve is kind of steep,” Brown said. “We can hopefully bridge the gap and save people years of frustration.”

As one of its activities the Firecats usually completes one online certification course together each year. The course is an introduction to wildland fire behavior. However, firefighting is just one aspect of a much broader job, which may also involve felling trees and putting up fire prevention signs, Brown said.

“I think the job is often romanticized,” Brown said. “Really, a lot of it is manual labor and you help out the forests with whatever needs they have. And that’s great, but I think getting into it you don’t want to have this idea that you’re going to be slaying the dragon the whole summer.”

Brown encourages students to get involved in wildland firefighting.

“I think it’s a great job that takes you to a lot of cool places, and you get to do a lot of cool stuff,” he said. “It’s a great community of people.”Anyone interested in joining the Firecats can contact Brown at [email protected] More information on student organizations can be found at https://thehub.nmu.edu/club_signup.