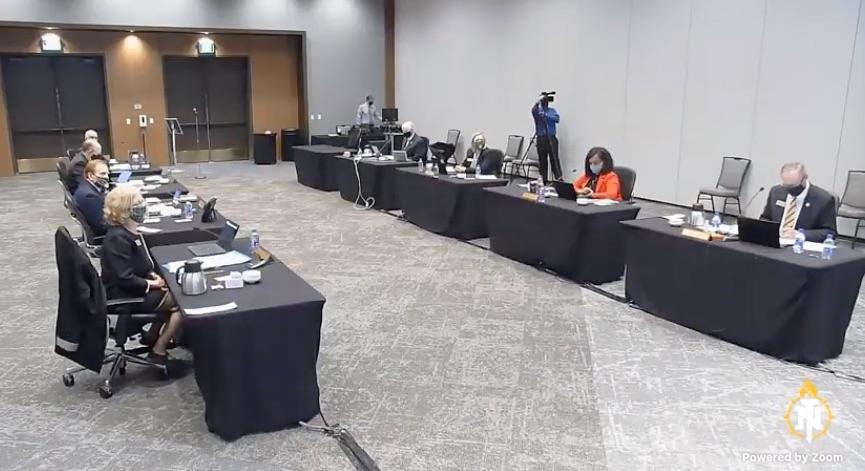 The Oct. 16 meeting of the NMU Board of Trustees discussed a few big topics. Social justice, budgets, student organizations, and memorials of life were on the front burner.

The NMU Board of Trustees met on Oct. 16 to discuss several important issues and topics principal to NMU at this time. On the agenda was a memorialization for two recent passings in the NMU community, undergraduate health risks, budget changes and social issues on campus.

First on the agenda was to honor the lost life of Shane Hawkins, an NMU employee. Hawkins passed away in his home after a short battle with cancer, according to the Board of Trustees Vice President Gavin Leach. Another moment of silence was requested to honor Noah Sims, a student who passed while downstate at 20 years old.

Secondly, guest speaker and NMU Graduate Assistant Lisandra Perez spoke up with an interesting story. According to Perez, there has been a “lack of support and pattern of disrespect” received by assistants from the university during the pandemic. Perez brought up a September Q&A meeting with NMU President Erickson. Perez said that “instead of answering our questions of ethical treatment of workers during the COVID-19 pandemic, Erickson chose to hide behind the lie that we are not employees of the university.”

Perez continued with their point. “Are we not employees, after all the prior rhetoric referred to us as so?” Perez asked. They explained that the university sent “oath cards” for the graduate assistants to sign, “as required by the Michigan State article 11 section one constitution that we are employees,” said Perez. “By telling us to look to our parents for insurance, they are miscalculating our access to this economic privilege.”

According to Perez, Chairman of the Board Steve Mitchell previously stated that there have been 70,000 or so university students who have contracted COVID-19. Out of those 70,000, Mitchell reportedly said only three have been hospitalized across the nation. “This distorts the facts,” said Perez. They explained that according to the New York Times, as of Oct. 8, 2020, there have been in fact over 178,000 cases, and at least 70 deaths. “We demand that you stop spreading misinformation,” said Perez, who called for advocation for their cause and better protection for students and graduate assistants.

Chairman Mitchell explained what measures they have taken to help these graduate assistants. He explained that because of President Erickson, the assistants “have the same access to the Northern Michigan University Health Center [that] contingent faculty have.” He also said a task force was established with 15 members, including faculty and assistants, who will meet with budget directors, human resource directors and deans of the academic college.

They will provide recommendations to the president, who in turn will go to the academic council before he makes a decision, according to Mitchell.

“We understand that the pandemic is a very serious problem,” said Mitchell. “But as you look around this campus at Northern Michigan University, no school I believe in the country has done a better job of protecting all of the hearts of the wildcat community.”

In addition to the graduate assistants, it was brought to the attention of the board that some students had complained of toxic dorm environments. Talks of confederate flags being hung on doors, or campus being unwelcoming to students of color were mentioned.

“No one should be discriminated against, no one should be bullied,” said President Erickson. He explained that NMU has taken steps to ramp up a support system for students who feel this way. Some of these measures included expanding training programs for staff to better create dialogues and talk through these issues.

Importantly, the board approved its 2020-2021 operating budget of about $117.1 million. This was a 1% decrease from last year, however, NMU increased other funding for scholarships and fellowships by almost $300,000.

“The budget allows us to continue to drive forward in investing for the future through new enrollment initiatives while addressing the challenges of a flat appropriation, lower current year enrollment and the operational challenges presented by COVID-19,” said Gavin Leach, Vice President of Finance and Administration.

Lastly, a few minor decisions were made. The board decided to name the volleyball locker room the “Ron and Barb, ‘89, Neaves Volleyball Team Room.” Retiree Steven Nelson was deemed Professor Emeritus of Political Science, and a donation of five oil paintings to the DeVos Art Museum was solidified from Leon Lundmark, an American painter.