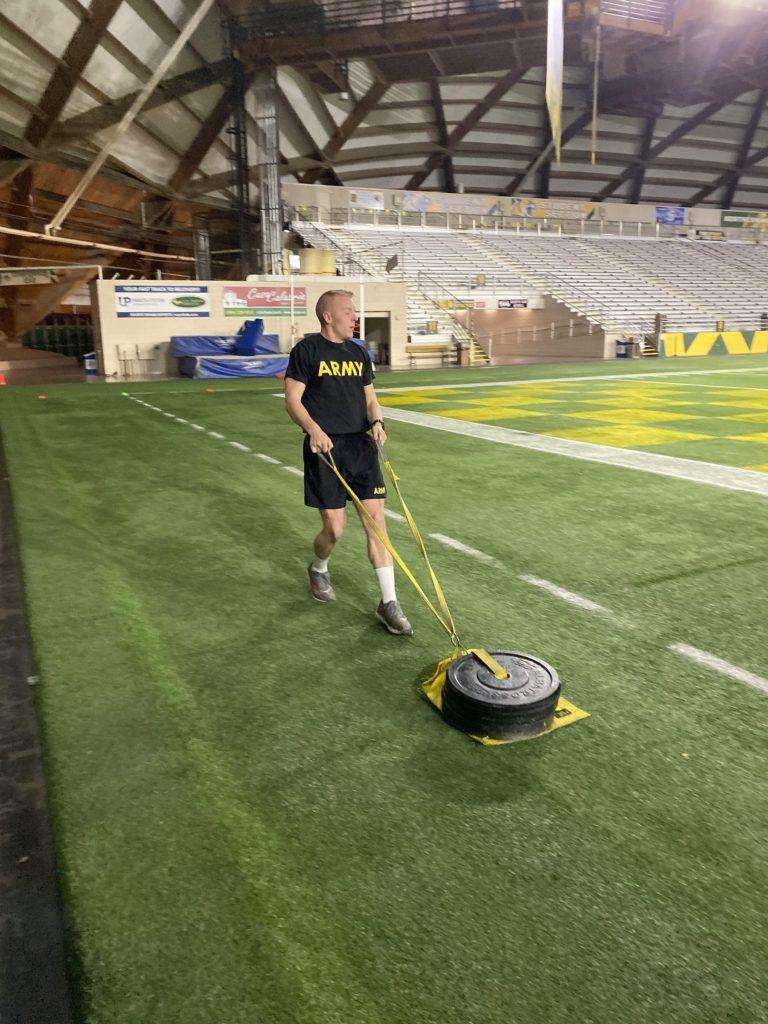 UP TO THE TEST—Students in the NMU ROTC program are put to the test physically with the fitness test and mentally with learning how to lead others. The physical fitness tests take place in the Berry Events Center parking lots or in the Superior Dome when cold weather arrives. Photo courtesy of Timothy Harris.

Leadership can be shown in many ways, and a place on campus where students can learn how to lead at a high level is the Reserved Officer Training Corps. Physically and mentally, students’ skills are put to the test in a program that provides many benefits and self-improvement.

Not only is the ROTC a leadership program for commissioned officers going into the U.S. Army, but it gives students potentially other benefits in 2-4 year scholarships, monthly contracted payments and physical training. Along with the scholarship, ROTC participants receive $600 per semester to pay for books, and receive $420 monthly under contract that they’re headed to the U.S. Army after graduation, regardless of scholarship. Everything that the ROTC teaches about handling an operation or how to lead people through an operation can be transferred to a full-length capacity, Lieutenant Colonel Timothy Harris said.

Harris is a professor of Military Science, and is the department head. Not only did he say that ROTC students will have a guaranteed job after they graduate, but that is not even the biggest benefit or responsibility someone may possess.

“The biggest benefit of the program is that we are an avenue for someone to serve in the U.S. Army in either the active duty component or the National Guard and Army Reserve components as a commissioned officer,” Harris said. “When I say commissioned officer, to me that’s a huge responsibility. That is the officer of the United States government that leads soldiers in many situations.”

Leadership is exemplified in many different ways, and is important for everyone in all walks of life to help their team achieve goals, Harris said. In life, we will want to learn how to motivate others towards an end goal, and that’s what ROTC is trying to do.

“You might be in a leadership capacity, you might not be the manager of your team, but you can convince and motivate people to want to buy in more to your team, and achieve team goals,” Harris said. “I think it’s important for anybody to be able to be that emergent leader in a team.”

Three things that Harris and his team look for in a cadet are a scholar, athlete and leader, he said. The program sees a lot of crossover with athletes, including NCAA and Olympic athletes at Northern. When participants with an athletic background enter the program, what they see is that those athletes are more likely to pass the physical fitness test on the first try after playing sports for years prior, Harris said. Not only does an athletic background help, but having a leadership background in athletics as a team captain does too.

“Someone who’s been a captain on a high school sports team, even if it’s not in the college ranks, they have the experience and background of being able to talk to the coaches and providing to their peers kind of what the coaches are looking for,” Harris said. “We see a lot of transition from those team captains to what we want in the ROTC realm.”

Recently, the ROTC has changed its physical fitness test to instead of testing on overall fitness; they are looking for functional fitness that’s more relative to combat, Harris said. The test used to be two minutes of push-ups and sit-ups, followed by a two-minute run. Now it’s much more long and complex, with students facing five tasks of deadlifting, power throwing medicine balls, push-ups, dragging a 90-pound sled and 40-pound kettle bells and bringing their knees and thighs up to the elbows while on a pull-up bar (leg tucks). There are certain weights, reps and times that testers make complete to pass, and after all of it, then there’s a two-mile run, Harris said.

“We’re doing things not just to look good or to have a general level of fitness, we are doing things that actually focus on the kind of functional movements that we’ll be doing in today’s level of combat,” Harris said.

The physical training takes place on campus and meets in the Berry Events Center parking lot and in the Superior Dome when it gets cold, Harris said. Something else that takes place over time on campus is the physical improvement of ROTC students, and the work that some put in without as much of an athletic background as others does not go unnoticed. Not all athletes are cadets, but all cadets are athletes, Harris said.

“We don’t just look at the end result, we do really focus on the improvement of somebody that shows up to the program their freshman year all the way through to their junior year to see how far they’ve come,” Harris said. “That’s one of the more rewarding things.”

With so many benefits, physically and financially, of joining ROTC, that doesn’t even include the leadership skills that many students across the country are given.