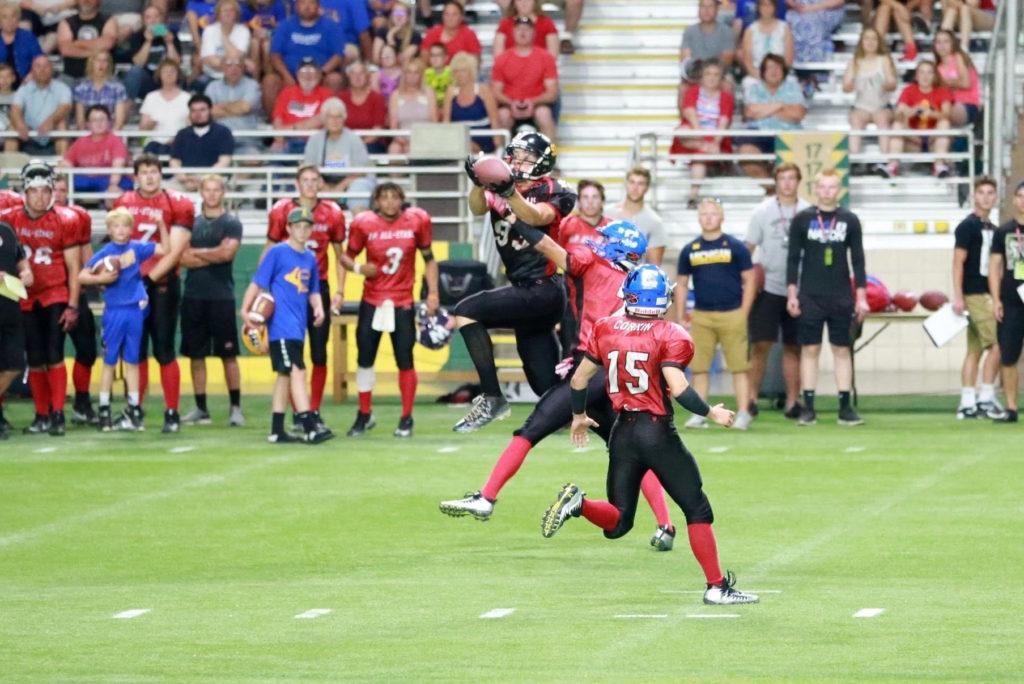 FAMILIAR TERRITORY—Jake Witt might've played basketball at Michigan Tech, but he has experience in the Superior Dome with this catch in the 2018 U.P. High School Football All-Star Game. Witt looks to provide more where that came from by joining the Wildcats' football team. Photo courtesy of Jake Witt.

Jake Witt was born and raised in the U.P., and has made quite the transition from playing basketball at Michigan Tech to playing football at NMU.

The 6’7” tight end was a standout in high school at Ewen-Trout Creek in both football and basketball, garnering interest from colleges to play both at the next level. After originally thinking that he was going to play college football with increased recruiting interest after his 2016 junior season, Witt ultimately decided to sign with Michigan Tech to play basketball.

He was a contributor for the Huskies basketball team as a freshman, averaging 6.4 points and 4.9 rebounds per game. He had the opportunity to play both sports at MTU, but his first priority was basketball and it would’ve gotten difficult to manage both sports at the same time once winter came, Witt said.

“I loved football all the way through and then as my senior year I decided to play basketball just because at that point, I thought it was a better route to go for me in the future,” Witt said.

However, Witt transferred to NMU to begin the 2019-20 school year, and was fully content on being a student despite his athleticism. He ended up deciding to play football and was going to join the team for spring practices back in March, but COVID-19 cut it short after just one day.

“I honestly never thought that of stepping on the field or stepping on the court again coming from (Michigan) Tech,” Witt said. “I came to Northern as a student just for that full year.”

When Witt came to Northern, he was in a great state of mind and loved campus, he said. A welcoming football team and coaching staff made the decision much easier for him.

“I grew to have a great bond with a lot of them as I trained and worked out with some of them over the springtime. I decided to play football just so I could get out there and hopefully help the guys here and hopefully have some good times and some good memories here.”

Witt came to NMU with some familiarity as he was heavily pursued by the former Wildcats’ Men’s Basketball coaching staff, he said. When he came to Northern in 2019, the new staff got in touch with him, and that they’d set him up on the team if he wanted to play.

After not playing football for three years, and participating in eight-man football in high school instead of traditional 11-man, Witt has been using this time to train and sharpen his skills. After not getting much time in spring ball, and the GLIAC’s announcement postponing athletic events throughout the calendar year, Witt has been lifting and getting ready for whenever the season returns. As far as his role, the team and Witt are still working on that, he said. Padded practice just started this past week, so the Wildcats will have to wait to see its newest tight end participate in team drills.

“I’m extremely excited, I always loved football when I played in high school and it was always a blast. Just getting out here already with helmets and shoulder pads, it’s been exciting getting back in that football mindset and getting in that team atmosphere with the guys,” Witt said. “I’m super excited to get everything on and finally get back out there again.”