Opinion—Conquering social media addiction: Why everyone should unicycle 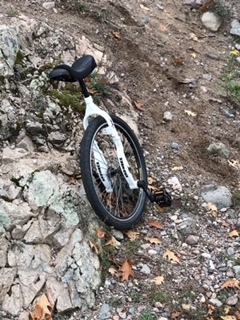 If you’re reading this, it means you escaped the urge to scroll through one platform or another to read a North Wind column instead. That addictive scrolling (yes, it’s addictive, according to addictioncenter.com), the feeling of dragging a thumb or pointer finger across a screen, or brushing a scroll wheel through the foreshadowing of a dystopia known as Facebook, is the very issue which constrains so many young people. The habit of scrolling is immensely hard to break, as I have personally experienced, much like the majority of people in their early 20s. The detriments to mental health which result from being connected online are overwhelming.

Addictioncenter.com also comments on the effects social media has on the mental state.

“Excessive social media use can not only cause unhappiness and a general dissatisfaction with life in users, but also increase the risk of developing mental health issues such as anxiety and depression,” according to the site. “Constantly comparing oneself to others can lead to feelings of self-consciousness or a need for perfectionism and order, which often manifests itself into social anxiety disorder.”

When I catch myself consuming too much of an app, I delete it. Being an editor of a newspaper and wanting to build a social platform, this can be stressful. Fear of missing out may ensue as well as a feeling disconnected from peers, and yet when I do escape the scrolling for those precious days at a time I begin to pick up much better habits. Instead of scrolling I am reading, biking, surfing and unicycling (though never at the same time) and I am living. Yet such escapes never last long. A reason to redownload the wretched white on blue ‘F,’ the small alien head of Snoo or the tiny ghost with the strange, distrustful and oversexualized ‘news,’ always comes up.

Such habits of scrolling are an addiction which absorbs the user; addiction has now become more than a pack of cigarettes, rather, it is as if cigarettes have found a way to power an entire country and feed it too. Social media addiction is gluttony, and to break away is near impossible.

Forge.medium.com offers an article on ways to break the habit of mindless scrolling. These are excellent, however they all revolve around the phone — that evil thing that has trained us like a Pavlovian dog. I believe the best way to truly rid oneself of it all is to huck that sleek and chic iPhone 12 right into Lake Superior where a lucky scuba diver can find it one year later and flip it. Realistically the smartphone is inescapable, but becoming aware of how trained you are to check and scroll is a start to evading its grasp.

I realized over the summer that I was developing negative habits due to the amount of time I spent scrolling through Reddit. Sure, the personalized content and less frequent ads on that site were a step up from other platforms, but I would be hard-pressed to remember most of what I viewed after spending hours a day on it.

Yet I do remember when I took my geared unicycle out whenever I escaped the habit of scrolling. I remember every time I escaped and went to the south and north trails and felt as alive as a novice mountain biker could. In contrast, what I remember most about scrolling is how annoying ads were and how awful I felt when I checked the time and discovered that hours had passed.

If you are struggling with scrolling, then delete the app. There are better ways to spend time; learning to unicycle is only one of those many ways.

I urge my peers to commit to that lingering thought of escapism. Deleting an app is scary, but it does not mean it is gone forever. Redownloading is okay, but it is good to remember and be aware of the time you had when the app was not there. As a generation, we need to spend what time we have promoting our mental health. Removing the scrolling removes negativity and contributes to better habits.