Setting the sights on Opening Day 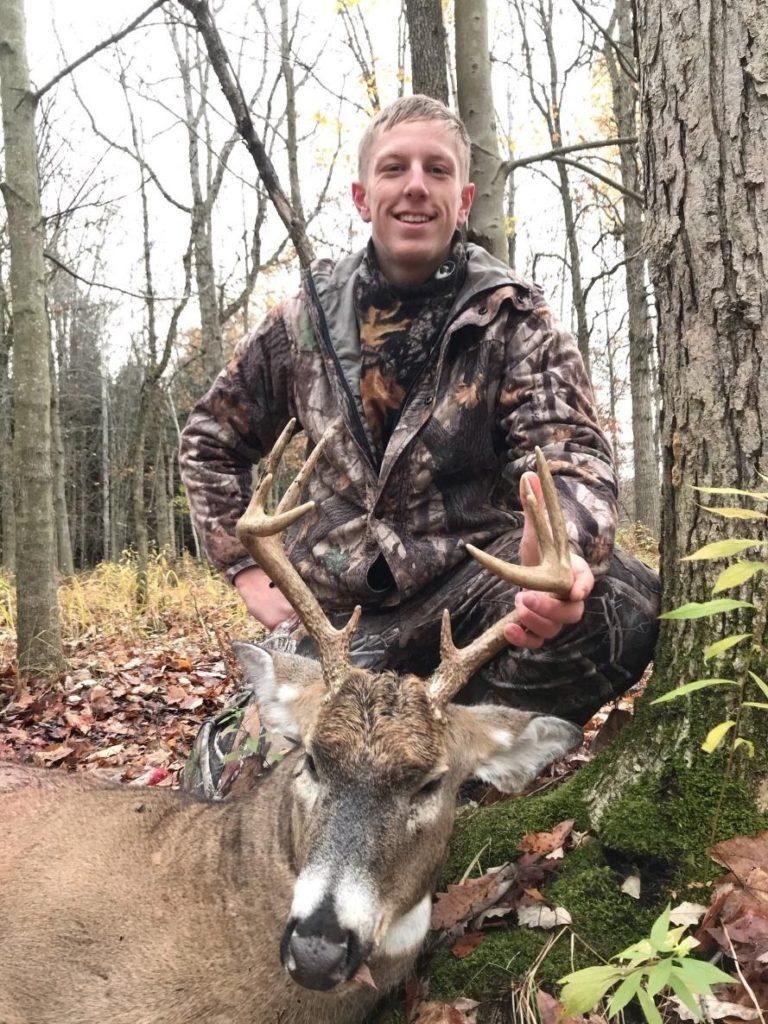 OPENING DAY EXCITEMENT— Opening Day is back for another year, and deer all over the state of Michigan should be on the lookout. Photo courtesy of Garrett St. John.

Nov. 15 marks the first day of the white-tailed deer rifle season in Michigan, and offers both students the opportunity to take to the woods amidst the chaos of COVID-19 and final exams.

One such student is Garrett St. John, a sophomore fisheries and wildlife management major from Breckenridge Michigan, who says that hunting allows him to escape the noise of finals week, and that being in the woods is like a vacation to him. He goes home and hunts as often as possible, usually two or three weekends each fall.

“My friends understand that there’s no chance of hanging out with me until at least January,” he says.

For St. John, hunting is more than just recreation. It’s his passion.

“Hunting is my life,” St. John said. “Harvesting game is one of the most blessed traditions any human being can take part of.”

Like many NMU students who hunt, St. John’s passion started at a young age, and it grew as he did. He first started hunting in elementary school and shot his first deer at the age of 12.

“It happened so fast, and it’s hard for me to remember the shot nowadays,” St. John said. “I wasn’t sure if my shot was on target until we found the deer only 60 yards from where he initially first stood.”

Upon walking up to the dead animal, St. John said that he was filled with emotions.

“Tears flooded my face upon recovering the animal, and not because I was sad or even happy,” said St. John. “It was because harvesting an animal humbles any man or woman, and it brings the sense that you are a part of nature…I still live for moments like this to this day.”

For those interested in deer hunting but have little or no experience, St. John has a simple message.

“Let the outdoors become you,” he said. “Take advantage of this opportunity, and it will change your life,” St. John added that it is important to be patient, practice, and respect everything that you harvest, but most importantly you should enjoy yourself while hunting.

Rachel Leightner, the Wildlife Outreach Coordinator for the Michigan Department of Natural Resources Wildlife Division spoke about the many benefits of hunting, stating that hunting is fundamental to regulating wild game populations as well as boosting Michigan’s economy.

Michigan United Conservation Clubs reported that Michigan’s hunting and fishing industry generates approximately $11.2 billion for the state economy every year, and supports 171,000 jobs just in Michigan. She stated that a portion of this economic success comes from the mandatory purchasing of hunting licenses.

“The money generated from the sale of those licenses fund natural resource management and wildlife habitat throughout the state,” Leightner said. Perhaps the biggest impact that hunting has on the state comes from the lessons Michiganders learn from the experience.

“Hunting also provides people the opportunity to connect with nature and develop an appreciation for where their food comes from,” said Leightner. “We must conserve natural areas and wildlife for future generations to enjoy them as we do now.”

“Find a group…and become an active member,” he said. “Surround yourself with individuals with like-minded interests, and seek mentoring opportunities.”

One such club is the West Branch Sportsman’s Club in Skandia, where Frank is an active member. According to him, the club has approximately 100 members who meet on a monthly basis to enjoy a meal together and talk about the outdoors. The club sponsors shooting sports, hunter safety courses, trap shooting contests, silhouette shooting, a turkey shoot fundraiser, firearm sight-in days and the annual Winter Predator Challenge. Frank stated that club activities are open to the general public, including students at NMU.

“We are always seeking people to assist with club improvement projects and raising funds for these projects,” Frank said.

Since the pandemic began, club members must follow social distancing and mask wearing guidelines, and no public outreach or new membership has been approved, meaning that you may have to wait if interested in becoming a member.