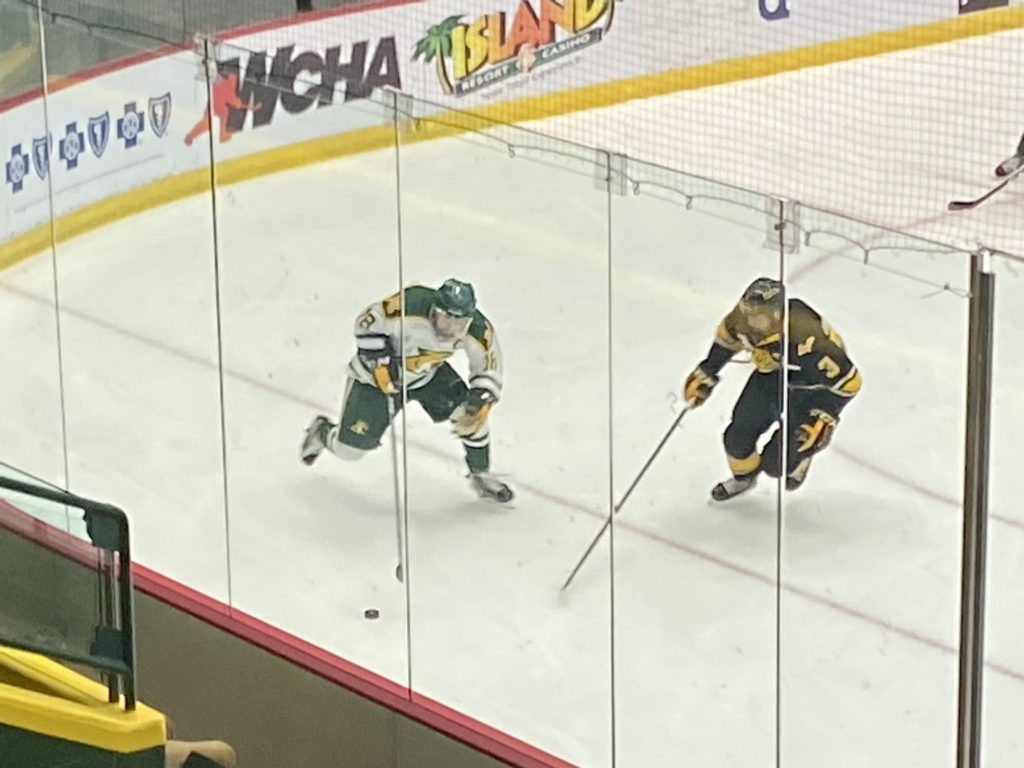 The NMU Hockey team followed up a season-opening victory over Ferris State with back-to-back losses to Michigan Tech in a home-and-home series on Friday, Dec. 18 and Saturday, Dec. 19. The Wildcats followed up a close 4-3 overtime loss in Houghton with a 3-1 loss in Marquette on Saturday.

Northern drops to 1-2 on the young season, and there are different takeaways, positively and negatively, from the first three games. The second loss at home on Saturday appeared to be a cause of physical fatigue from playing three games in four days to Head Coach Grant Potulny, but that wasn’t necessarily the case as the game went on.

“It’s almost a tale of two games, the game started and it was our third game in four nights after not playing any hockey, and on the bench I felt like we didn’t have energy,” Potulny said. “At first you’re starting to think, ‘Boy, maybe we shouldn’t have scheduled that game on Wednesday,’ because coming out of COVID-19, that’s tough. Then as the game went, I thought that we got stronger, so it wasn’t as much physically as it was probably mental fatigue for them.”

The energy was there in Friday night’s road loss, Potulny said, but he didn’t think his team was prepared enough to play on Saturday night at the level required to win. From the coaches, players and the stats, the ‘Cats came out slow to start Saturday’s game. Taking only five shots in the first period put them behind the eight-ball fast, and trailed 1-0 at the first intermission after MTU junior captain forward Alec Broetzman scored an unassisted goal at 12:55.

With only 21 shots on the game compared to MTU’s 32 shots, Potulny said that those issues stemmed from the slow starting first period. The Wildcats didn’t attack at all in the period, and it was dumbfounding, Potulny added.

“I think the first period we had one [five] shots on goal, and that was more of a product of us just being apprehensive going into the game,” Potulny said. “The thing that’s interesting to me is I thought we played a good game [Friday], I really did.”

Senior forward Joseph Nardi took accountability for his team’s poor start as a captain, and it left him wondering what would’ve happened if NMU would’ve come out of the gates playing better.

“Didn’t come out strong at all, that’s on the leadership group, and I’ll take responsibility for that. We weren’t ready to play right from the puckdrop, and that kind of bled into our game,” Nardi said. “If we play a full 60 [minutes], there might be a different outcome.”

Friday’s night positive performance despite the loss had Potulny and his staff thinking that the Wildcats would play well again on Saturday, and the team’s meeting prior to the game was really positive, he said. However, the room felt dead when Potulny walked in, but that happens throughout the course of a season, he added.

This wasn’t nearly as much of a concern to Potulny as the penalties were, including a five-minute major interference penalty near the end of the first period by junior forward Griffin Loughran. He didn’t play another shift after his penalty, Potulny said, and another unnamed player sat out on Saturday after committing two infractions in Friday’s game that weren’t called after the film review. After last season’s penalty-riddled season, they’re still an issue at the beginning of this year’s campaign, and it changed the course of the game when NMU captured momentum in the second period.

“It’s got to get figured out because here’s what happens, the second period I thought we gained all the momentum in that period, we killed a bunch of penalties, killed a five-minute major, killed a 5-on-3,” Potulny said. “When you kill a five-minute major or a 5-on-3 in a game, you typically win that game; when you kill both, you probably should win that game for sure. But because we had a couple guys out who are penalty killers, and then Griff was out as a penalty killer, you’re playing the same guys over and over for the whole period.”

By the third period, where junior forward Vincent de Mey scored NMU’s only goal, the team was playing better, but ultimately didn’t have enough jump to tie the game with its top goal scorers either sitting out or too fatigued, Potulny said. Along with this, two of NMU’s top six defenseman didn’t play due to injury, and led to freshmen playing their first minutes and created different lineups, Potulny said. Not giving up a goal during the five-minute major penalty and in other shorthanded situations was a positive going forward.

“I liked certain areas of our game, the penalty kill was something last year that compounded our penalty issue and this year, we’ve given up two penalty kills goals but I don’t think they were breakdowns by the penalty kill,” Potulny said. “Other than that we’ve been perfect, and that’s obviously a plus.”

The first three games were experimental for the Wildcats in terms of playing different players and lineups trying to figure out what works best, Potulny said. He’s glad that they did that, and the changes will tighten as conference play begins.

The Wildcats have one game left before the calendar flips to 2021 with a nonconference matchup on the road against Ferris State at 6 p.m. on Wednesday, Dec. 30.