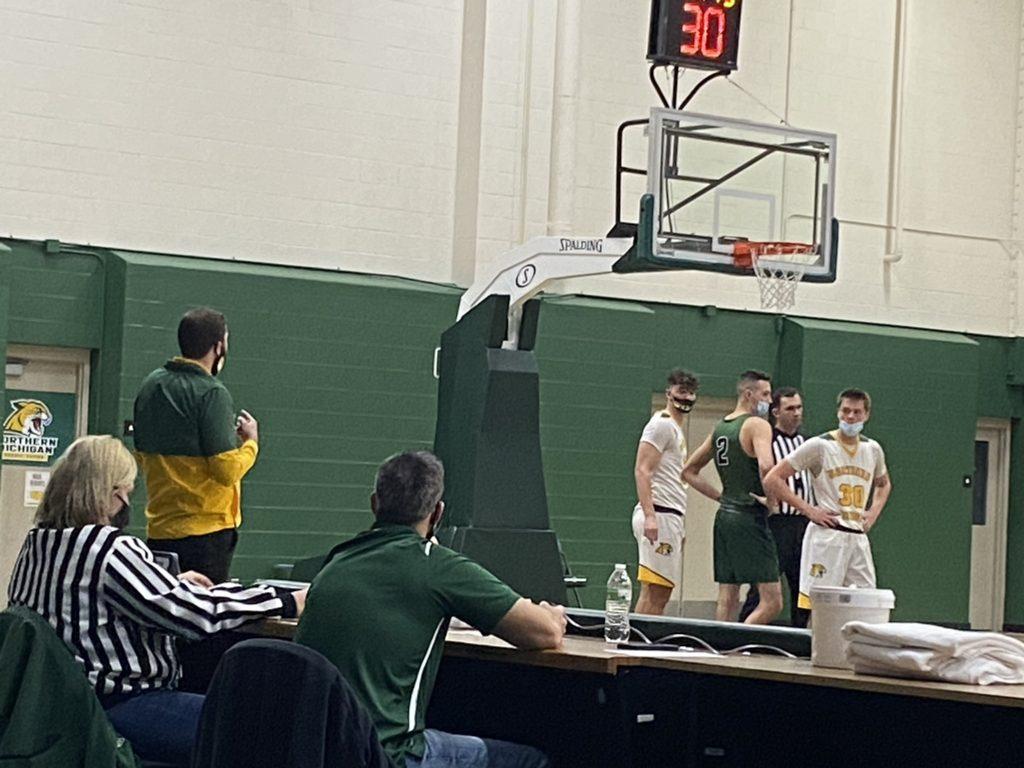 The NMU Men’s Basketball team got off to a hot start in its game on Sunday against University of Wisconsin-Parkside, but the Rangers went on a big run in the middle of the game en route to a 17-point victory.

The ‘Cats won the first game of the doubleheader on Saturday, Jan. 9 in a thrilling 76-75 overtime game where incoming transfer junior Tre Harvey made the game-winning corner 3-pointer to complete the double digit comeback. However, the Rangers built the same lead in the second game, and this time held on. NMU roared out to a hot start with a 26-18 lead with under six minutes left in the first half. UWP stormed back to go on a 43-15 run over the next 20 minutes to take a 61-41 lead with seven minutes left in the game.

Last season, the Wildcats had many an offensive drought, but with junior guard Dolapo Olayinka sitting in the first half due to foul trouble, it made his rep-limited team become stagnant offensively. Olayinka still led the team in scoring with 17 points in 26 minutes, but his presence was missed in stretches for NMU.

“When your best player [Olayinka] that you rely on for being the main focus of your offense is kind of in and out, I just didn’t think we knew how to handle that well,” Head Coach Matt Majkrzak said. “It’s probably a lot of us just getting more reps together, more games together.”

The first part of UWP’s run gave them a 33-30 halftime lead, but when the Rangers hit four straight 3-pointers to take a 42-33 lead with under 18 minutes left in the second half, the game was all but over.

“A guy that we wanted to shoot the ball [Bryce Prochaska] hit three straight 3’s, but that’s basketball and we didn’t handle it well,” Majkrzak said. “That was probably the part that I was disappointed with, was just the way we handled some adversity with a guy making shots, because that happens.”

Prochaska’s 3-point shooting caused NMU’s energy to dip, but what it needed to do was have its energy rise, Majkrzak said. In the final four-five minutes of the game, the Wildcats went into full court pressure to try to make something happen late. NMU cut the Rangers’ lead to 66-55, but UWP scored the final six points of the game. Majkrzak told his guys to just run around and make plays, and the energy was great, he said.  Northern did force a few turnovers with the press, but ultimately the deficit was too much to overcome.

“It was too little, too late, I wish I had tried it with about 10 minutes to go,” Majkrzak said. “Because I actually think it might’ve worked, but that isn’t something that we’ve ever practiced.”

NMU also tried switching to zone defense along with its typical man-to-man defense in the second half because Majkrzak felt like if both teams stayed in regular man-to-man, UWP’s extra practice time would show up in the results, he said. This also caused some of the offensive droughts, but the Wildcats need to be tougher to handle switching defenses and subbing many players in and out, Majkrzak added.

Along with Olayinka, Harvey had another solid game with 13 points after putting up a team-high 23 in the first game against the Rangers. In a season that is formatted differently with playing the same team in back-to-back games each weekend, coming out in the second game after a win will be important. Majkrzak didn’t think that was the reason that NMU came out on the losing side, but he did have his own conclusions.