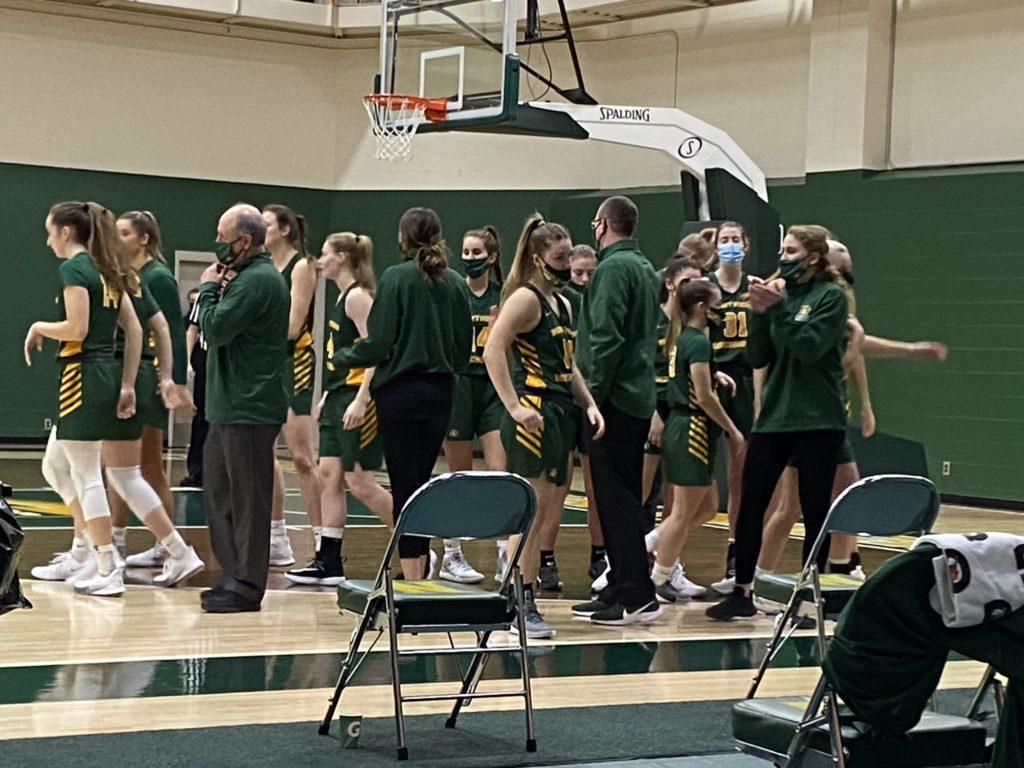 With a 10-point lead at halftime on Saturday in the first game of the doubleheader, the NMU Women’s Basketball team caved to Saginaw Valley State University (SVSU)’s pressure in a 56-52 loss. In Sunday’s game, the Wildcats handled the Cardinals’ full court press much better and held on to its 11-point lead with a 61-45 victory.

After Saturday’s loss, Head Coach Troy Mattson pointed to his team’s failure to pass the ball to open players, and its turnovers against the SVSU press. The Wildcats (3-1) made key adjustments in time for the game on Sunday, and executed.

“I was happy with the way we executed the game plan on both ends, both defensively and offensively,” Mattson said. “Like I said, we had to make adjustments on both ends, they were simple, but they were really important to our success.”

Mattson’s emphasis on ball movement was crucial over the course of the weekend, relying on sophomore guard Makaylee Kuhn and junior forward Emily Mueller to facilitate to teammates on Sunday. Kuhn led the team with a double-double of 16 points and 13 rebounds, and Mueller scored 12 points, making five of six shots. Sophomore guard Samantha Potter chimed in with 13 points, and freshman Kayla Tierney knocked in three triples for nine points.

“We had a great film session this morning, I think the girls were almost in awe of what they saw yesterday. That’s not how we’re supposed to play, and I thought we did a great job in the halfcourt offense passing the basketball,” Mattson said. “We ended up with 12 or 13 assists compared to the supposed four we had yesterday.”

The other element that transferred from the first game to the next for NMU was handling SVSU’s fullcourt press, and it wasn’t very pretty looking, Mattson said. But on Sunday, Northern scored 12 fast break points compared to zero on Saturday, and it echoed the adjustments the team had made in shy of 24 hours. The Cardinals had 20 points off of turnovers yesterday, and the ‘Cats countered that with a new press breaker, Mattson said. He felt his girls executed it great and it created opportunities to get baskets off of it, he added.

“I think the big thing was yesterday that the press got to us in the third quarter, and they got back in the game and they stole the ball from us and made and-ones,” Mattson said. “We did a great job of taking care of the ball against the press and attacking when we were supposed to.”

The growth of NMU’s young players will be important for the Wildcats this season with four freshmen playing big minutes. The group is trying to learn, Mattson said, and he’s had to tell himself to be more patient with them. It’s a switch of a light when the game starts and he doesn’t recall how young of a team he has, Mattson added.

“The kids coming off of the bench, they have to learn so much in such a short amount of time that we’ve together,” Mattson said. “I think they really learned a lot through film this morning, and they really adjusted well.”

The freshmen grew a lot in the past day, Mattson said, but that can be said for the whole team. Playing a whole new series against a new style of play created its challenges, but NMU walks out of the first two weekends with three wins in four games.

“It was a big growing weekend for us because we had to face a team that was more physical and a little bit bigger, stronger than Parkside,” Mattson said.

This is a big step going forward, Mattson said, and nobody could use a bigger step than this team when it hosts the preseason GLIAC North Division favorite Ferris State Bulldogs on Saturday, Jan. 23 and Sunday, Jan. 24.