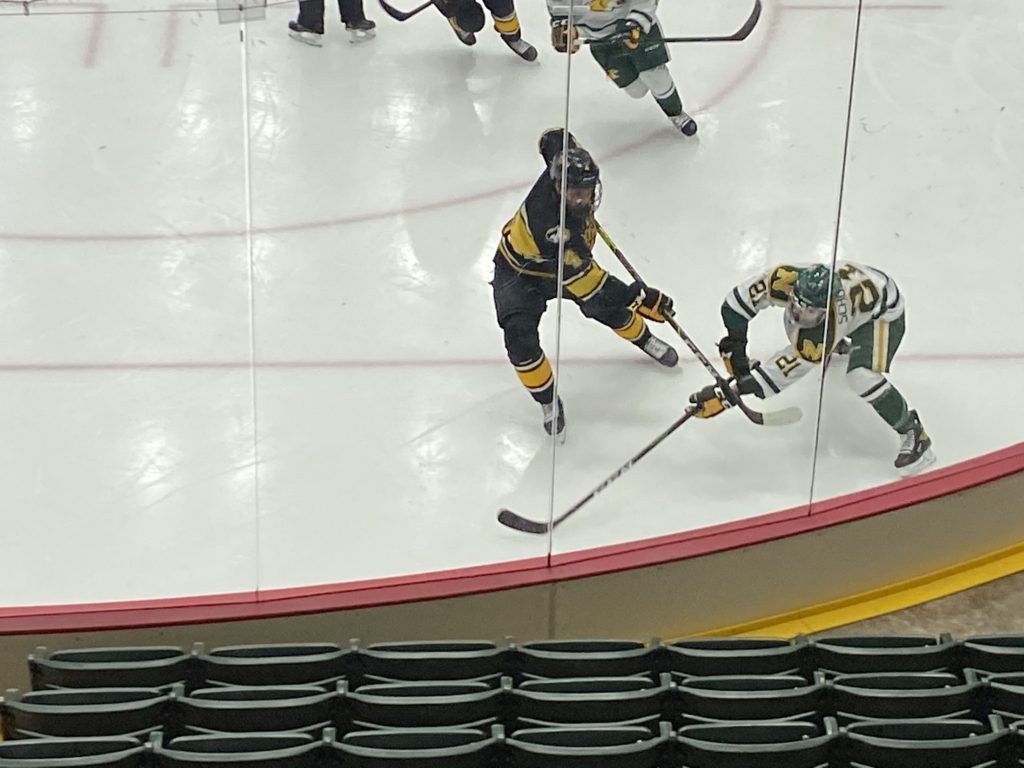 The NMU Hockey team got off to a strong start and didn’t give up any power play goals- two major rivals that have haunted the ‘Cats so far this season. However, despite doing those things and playing well in the eyes of Head Coach Grant Potulny, the Wildcats lost to Michigan Tech 4-1 on Monday night.

NMU (2-10, 0-2 WCHA) has now lost eight consecutive games, and haven’t been victorious since the calendar has turned into 2021. The good news for the Wildcats is that their upcoming opponent, Ferris State, is the only team that that they have beaten this year (2-0). But going back to this series with Michigan Tech that was added to the schedule on short notice due to COVID-19, the Wildcats only scored one goal on 65 shots.

“That’s the hard thing in hockey when even though you’re winning the turf war, you have to put some points on the board, and we couldn’t do that tonight,” Potulny said. “We had some really good looks, just couldn’t find a way to extend it. The worm’s got to turn, we have to start generating some offense to help us do that, but it’s tough when you can’t get to two [goals].”

Northern didn’t take long to get the lead when sophomore forward Andre Ghantous gave the ‘Cats a 1-0 lead on the power play. Potulny said he thought his team played great in the first period, but some unfortunate bounces left the Wildcats in the dust. Late in the first period owning a 14-4 shot advantage and having complete control of the game, a puck got stuck in an NMU player’s gear and ended up getting by junior goaltender Nolan Kent to tie the game at 1-1 for the Huskies. In the second period, a puck went off of a Wildcat player’s skate and went up in the air and into the net. The second goal was deflating more than the first one, Potulny said.

“You have to find a way to get through it, nobody’s going to feel sorry for you. It’s frustrating when you play well,” Potulny said. “Even going back to I would say the last five games with the exception of the third period on Saturday in Bowling Green, it sounds crazy, but we’re playing good hockey.”

Going back to what Potulny said about not being able to score, the Wildcats had many opportunities in the final minutes of the second period to tie it up. Though no matter how many shots the Wildcats peppered at Michigan Tech sophomore goalie Blake Pietila, he made many big saves. The Huskies took advantage with two third period goals including an empty-netter, and that was all she wrote.

“We got to continue to play the way we’re playing, part of me is disappointed that in the two games, I don’t think there was any variance between the way both teams played,” Potulny said.

The focus recently has been on defense, getting the team used to blocking shots and becoming comfortable being uncomfortable, Potulny said. He added that this may be a cause of the offensive struggles as of late, but now that offense will be the focus, he said that it is important that NMU keeps the defensive baseline that they’ve built. What could help the Wildcats is getting back some healthy players, and it is possible that junior forward Griffin Loughran and sophomore defenseman Hank Sorensen return to the lineup soon, Potulny said. Right now, the ‘Cats have a slim margin for error, and every player needs to pull the same weight, he added. It appears that despite the struggles over the course of the past eight games, the team is in good spirits getting ready to get another win on the board.

“I said [after the game], ‘Guys, I know everyone of you cares, you practice hard, you play hard, you do the right things.’ We don’t have any issues where coaches are pointing at players or players are pointing at coaches, and typically in one of these stretches, that’s an issue,” Potulny said. “For us, fortunately we don’t have that, so it gives you a chance to keep working together and keep trying to make strides.”

The focus now shifts to Ferris State, a rare conference series for the Wildcats. NMU is only 0-2 in WCHA play even with the losing streak, and there’s still a lot to play for the rest of the season.

“Fortunately for us, the way the schedule has worked out, these haven’t been conference games. You still obviously play to win the game, but the line is, ‘You can’t win the league early in the year, but you can lose it,’” Potulny said. “For us, it’s you probably can’t lose, it’d be home ice. If these were regular season conference games, you’d probably be out of contention for home ice. Hopefully this weekend, we get the games in and we get a chance to put league points on the board.”