Opinion—Even the playing field for women in sports 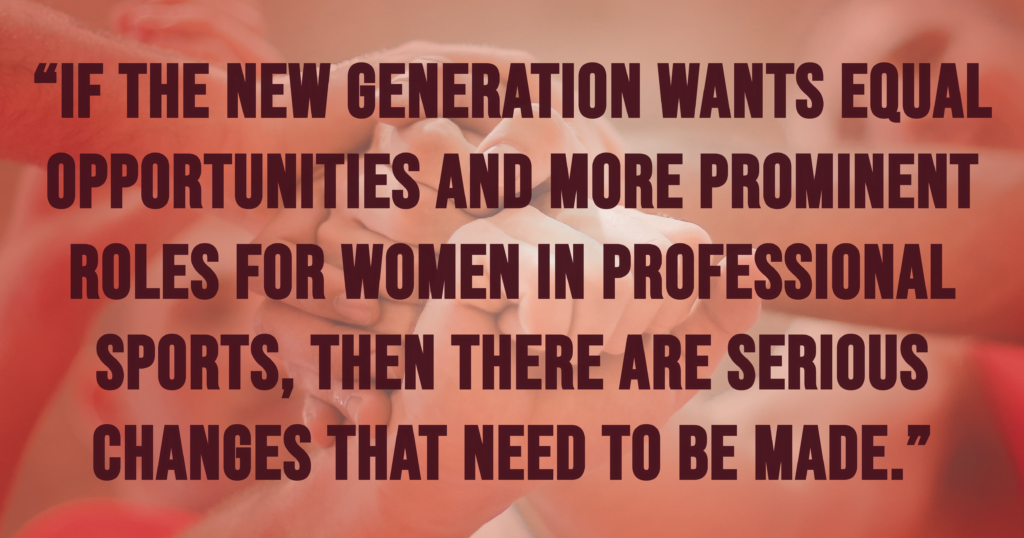 In such a male dominated industry, the tide is turning in professional sports to harbor a better working environment for women. As more women are being hired across major sports, there still seems to be a remaining looming problem: mistreatment and sexual harassment. The current emerging women in the industry such as Kim Ng, all have one goal, to influence a new generation of girls, but it’s hard to do that with the unwelcoming current conditions.

After only holding the position for just over a month, Jared Porter, the now-former general manager of the New York Mets baseball team, was fired amidst a sexual harassment case after sending lewd pictures to a female foreign correspondent. While the interaction between Porter and the unidentified woman happened in 2016, it was not until recently that the story surfaced.

The Porter case began during the 2016 Major League Baseball season while Porter was a member of the Chicago Cubs as director of professional scouting. The Cubs organization said it was not aware of the incident after it occurred. Although the woman did not and does not want to file a lawsuit, she still left the game of baseball as she felt that “remaining around baseball long term was simply untenable.”

With the large market sports industry being mainly male-dominated in administration and head offices, there has now been a recent shift in the game. This offseason the Miami Marlins hired the first woman GM in the MLB, Kim Ng. The Boston Red Sox hired Bianca Smith making her the first female MLB coach, and Dr. Jen Welter made history becoming the NFL’s first female coach, as she begins as the linebackers coach this off-season for the Arizona Cardinals.

A common theme emerged through discussions and interviews after these women were hired: they all want to inspire other women interested in professional sports. As their dreams are becoming a reality, they are opening the doors to a new beginning for others.

However, with the improving professional demographics, it’s time to look back at equal opportunities within professional sports. MLB’s website does have public documents regarding its sexual assault, domestic violence and child abuse policy, but the site has not been updated since 2016. It also has an anonymous caller hotline for the United States, Puerto Rico and Venezuela.

Just because these resources are available though, it does not always mean that the professional sports workplace is necessarily a safe space. In regards to the Jared Porter incident, the unnamed victim kept her story hidden for years, and did not come forward due to fear of retribution and an end to her career.

If the new generation wants equal opportunities and more prominent roles for women in professional sports, then there are serious changes that need to be made. A safer, more welcoming workspace is important for any industry, especially one as large scale as professional sports. The new wave is here, it has started: women in sports. So let’s make a positive change to keep it that way.