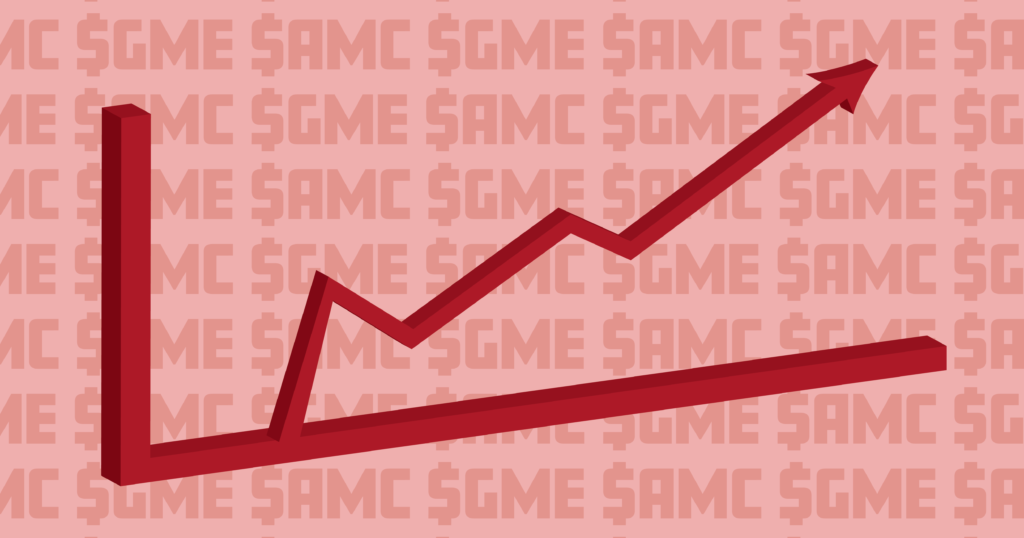 The stock market and social media have collided on an unprecedented scale. The spotlight is on Reddit, specifically the subreddit r/wallstreetbets, which caught media attention when users invested heavily in GameStop stock, causing prices to soar. Then, as quickly as they took off, prices came crashing down again.

Despite the news coverage, the sharp rise and fall of stock prices isn’t a new phenomenon. David Rayome is a professor of finance at NMU and he has seen the same thing happen to other companies.

“A couple of years ago I saw a shipping company go from less than $3 a share to $125 a share in two days,” Rayome said. “Three years later, that shipping company is selling for $2 a share. It happens all the time.”

When a stock price goes up at a rapid rate, it experiences what is known as a parabolic move, or “going parabolic”. This refers to the upward movement of the right half of a parabolic curve. A stock can go parabolic for several reasons.

This happened with GameStop, so what makes this parabolic move newsworthy? The answer is Reddit.

“Reddit has been doing this on a smaller scale for quite a while,” Rayome said. “If you follow Reddit streams there are people talking about stocks and options every day. Some of them make money and some of them lose money. This is the first time it’s come to national attention.”

Rayome says this is the first time social media has had such an immediate, drastic influence on the stock market.

“We’re talking about billions of shares of stock moving, trading hands,” Rayome said. “We’re talking literally millions of dollars being made and lost in a couple of weeks. If it was ten thousand dollars, we probably would have never heard about it.”

Keith Gill is one of the investors well known for keeping a close eye on GameStop’s stock prices. Since September 2019 he has posted regular updates to Reddit documenting the value of his shares. He hasn’t sold any of it since his initial investment.

“At one point, he was up $40 million,” Rayome said. “Most of that has dissipated, but he’s still holding all the stock because he bought it for the right reasons. He bought it as an investment for the long term.”

“The people on Reddit weren’t using any of it,” Rayome said. “It was just mass hysteria.”

This mass hysteria was sparked in part by contempt for hedge funds. Investopedia defines a hedge fund as “alternative investments using pooled funds that employ different strategies to earn active returns, or alpha, for their investors. Hedge funds may be aggressively managed or make use of derivatives and leverage in both domestic and international markets with the goal of generating high returns (either in an absolute sense or over a specified market benchmark).”

Hedge funds can use a technique known as short selling, in which they borrow shares that they predict will decrease in value and sell them. When the value continues to drop the short seller buys the stock back at a price lower than the selling price, turns a profit, and returns the shares to the lender.

Unlike Gill, many people weren’t using any analysis or logic when investing in GameStop. Rayome described the mentality of many inexperienced investors.

“It became ‘us vs. them’,” Rayome said. “‘Let’s take down the hedge funds.’ And you had people with no experience at all who were just jumping onboard this Reddit rebellion and were buying shares of GameStop at ridiculous prices.”

In response to the parabolic move, brokerages such as Robinhood placed restrictions on the trade of certain stocks, including GameStop, meaning people who bought stock at those high prices weren’t able to sell it. Those restrictions have since been lifted, but there is still some speculation as to whether this response, or the initial rally of stocks, qualify as market manipulation.

The U.S. Securities and Exchange Commission defines market manipulation as “when someone artificially affects the supply or demand for a security (for example, causing stock prices to rise or to fall dramatically).”

In a statement on Jan. 29, the SEC addressed these concerns.

“The Commission is closely monitoring and evaluating the extreme price volatility of certain stocks’ trading prices over the past several days,” the statement said. “Our core market infrastructure has proven resilient under the weight of this week’s extraordinary trading volumes. Nevertheless, extreme stock price volatility has the potential to expose investors to rapid and severe losses and undermine market confidence.”

Can brokerages be accused of market manipulation at this time? Rayome says that’s unlikely. When the demand is too high, brokerage firms must restrict trade to some extent, otherwise the system will fall apart. Other stocks, such as Nokia and AMC, were also caught up in Reddit’s GameStop spike, and serve as a good example of why these restrictions are necessary.

“There were a couple days when Nokia, for instance, traded over a billion shares,” Rayome said. “That’s a lot of shares, and these brokerages have to carry an inventory to be able to fill these orders.”

In the end, long term investors like Gill stand to profit, while impulsive investors will suffer drastic losses. Rayome has some advice for people who want to avoid the same fate. Save your money. Only invest when you can afford to do so. Rayome says investing money you can’t afford to lose is the same as gambling.

Fortunately, there are plenty of resources available to students who would like to start trading on the stock market. The Superior Fund is an investment fund managed by students who buy and sell stocks and meet to analyze and discuss the market. There are also video tutorials and online guides to help potential investors learn the ins and outs of the stock market.

“You have the intelligence to be a successful college student,” Rayome said. “You rank probably among the top four or 5% of people in the world in terms of aptitude and intelligence, so you just have to use it.”