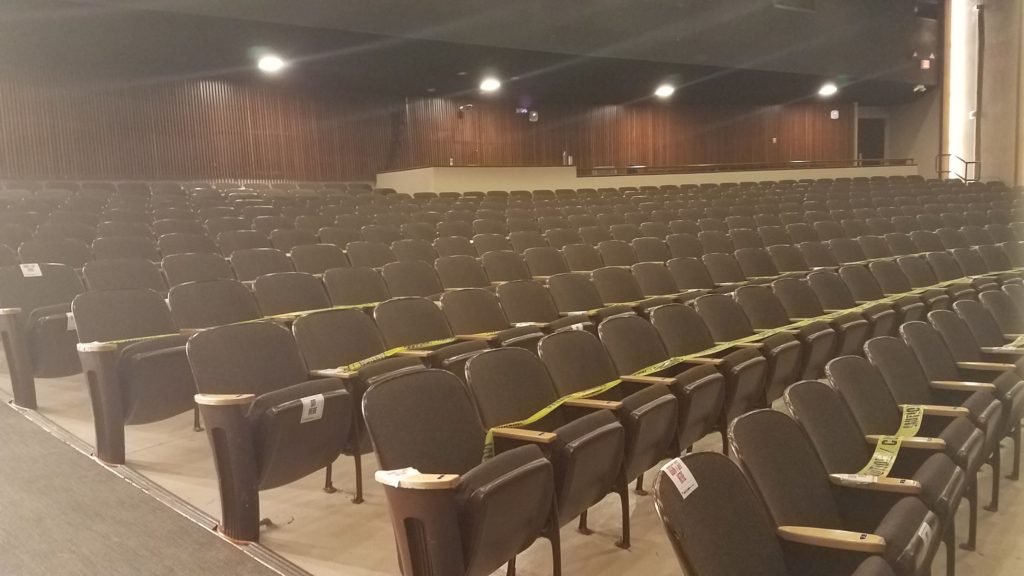 Rayna Sherbinow/NW CINEMA SPEAKERS— The rows of seats in the Forest Roberts Theatre are marked off with caution tape due to COVID-19. Despite the closed theatre, the department has been thriving through virtual formats.

Empty entertainment venues are a familiar sight these days, and NMU is no exception. The Forest Roberts Theatre’s 515 seats are vacant and draped with yellow caution tape. But the Department of Theatre and Dance won’t let the curtain fall on entertainment. The campus chapter of Alpha Psi Omega is using Zoom to bring some big names in the entertainment industry to campus. The group worked with Wolfman Productions in Southbury, Connecticut to arrange three speakers for the virtual event.

Danielle Feinberg is a technical director and lighting artist at Pixar. Her work can be seen in many Pixar films, including “Toy Story 2”, “Finding Nemo”, “The Incredibles” and “Brave”.

Lea Salonga is an actress known for her roles in “Miss Saigon” and “Les Miserables”. She can also be heard in Disney animated films providing the singing voices of Princess Jasmine in “Aladdin” and Fa Mulan in “Mulan”.

Ruth E. Carter is a costume designer who has worked on more than 40 films, including “Malcolm X”, “Selma”, “Roots”, and “Black Panther”. She has received two Academy Award nominations and an Emmy nomination in the course of her career.

Aside from the speakers’ ties to the entertainment industry in general, there is no common theme among them. This was deliberate, according to Sophie Sam. Sam is a junior majoring in theatre and entertainment arts. She serves as the vice president of APO at NMU and she helped arrange the events. Sam says diversity was an important factor when deciding who to bring to the university.

The pandemic was the catalyst for the event. Campus isn’t as busy as it used to be, and APO wanted to help solve that problem.

“We really felt that there was an opportunity to bring in some people that might excite folks, give them something to look forward to,” Sam said.

The event was initially planned with a closer focus on theatre and acting. However, because funds were secured from the Student Finance Committee, APO expanded the scope of the event. APO’s secretary is Emily Kendall, a senior double majoring in criminal justice and theatre. She says they decided to use the funding in a way that would benefit the greater campus community.

“We wanted to be inclusive and still do something that resonated with us but that everyone on campus was going to enjoy as well,” Kendall said.

Expanding the event in this way has provided an inside look at various areas of the entertainment industry, not just acting. Kendall recalls the session with Feinberg, who kicked off the series on Feb. 11.

The primary audience is current NMU students, but Sam says interested community members and alumni can join as well.

There are some benefits to holding an event online as opposed to in person.

“It’s all happening live on Zoom, so they don’t have to go anywhere for it,” Sam said. “They can do it from their dorms or wherever they happen to be.”

The sessions last for approximately one hour. Thirty to forty minutes are allotted to the speaker, and the remainder of the time is devoted to answering questions from the virtual audience.

“We actually have people moderating the chat, and so it’s just a live Q&A,” Kendall said. “Whoever is there can ask questions.”

Two of the three speaking events have passed as of Feb. 18, but there is still time to get tickets for Carter’s session, which will be held on Wednesday, Feb. 24. Free tickets are available online from NMU’s ticket office.

Alpha Psi Omega would like to make the Hollywood Speakers Series a yearly event.

“Depending on how things go as far as the pandemic goes, we would even love to maybe start bringing folks into campus physically instead of just virtually,” Sam said.

Bill Digneit, the director of the Department of Theatre and Dance, helped APO establish connections with managers and hire the speakers. He hopes the event will eventually be held in the Forest Roberts Theatre. However, given the current limitations, he is pleased with how well the students adapted to the virtual environment.

“The faculty and staff are very proud of the students in APO, and Sophie and Emily, for producing this event and really getting creative in a unique time and really thriving as students and a student organization,” Digneit said.