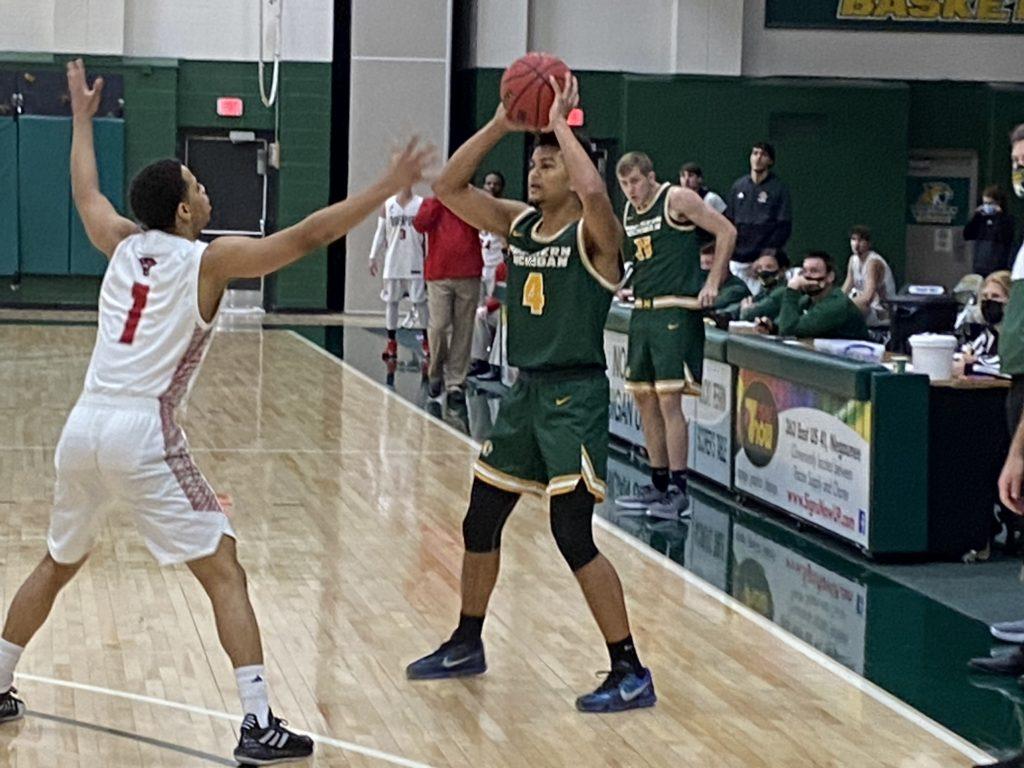 After putting up 100 points and a hot shooting performance on Saturday, NMU Men’s Basketball Head Coach Matt Majkrzak was expecting Davenport’s best in the second game of the weekend doubleheader. Sunday’s game was completely different, but the result stayed the same with the Wildcats’ win.

With the different scheduling format this season with teams playing weekend series, multiple coaches have spoken about how hard the team that lost the first game would play in the second. Davenport came out swinging true to that adage, and the ‘Cats (8-8) held on for a win.

“Sometimes you have images of how games are going to go, and most of them are wrong because that’s just how it goes. Today was almost a carbon copy of what I pictured a good Northern Michigan game looking like,” Majkrzak said. “I know it wasn’t perfect but it’s just kind of what I thought would happen if we were going to get a win.”

The Wildcats’ put up triple digits the day before in a 100-70 win over the Panthers, and Sunday’s affair was a grind. Neither team shot well, and despite a slow start from NMU, the game stayed close until the final minutes. Davenport shot 38.6% total from the field while making only two of their 17 3-point attempts. Northern edged the Panthers with a shooting performance of 44.4%, resulting in a 12-point victory. In a game where both teams and coaches showed a lot of emotion, it was that competitiveness that made the win that much sweeter for the ‘Cats.

“Tons of respect for Davenport and how they are coached and how they play and we knew they were going to be tough and competitive and gritty. We needed to match that and so far this year, for the most part, our wins have been what I would like to call pretty wins, you know we’ve shot well, we scored a bunch of points,” Majkrzak said. “The games that have been kind of ugly are the games we’ve lost so it was nice to show that we can win in that way because if we are going to make a run this year, you’re not going to win them all pretty.”

The ‘Cats didn’t play perfectly but still found a way to win, which is what they needed, Majkrzak said. As great as it was to shoot 58.1% and put up 100 points in Saturday’s win, Majkrzak knows you can’t win all of the games like that, he added. NMU has been known for defense in Majkrzak’s short tenure, but he felt they hadn’t had a defensive effort like Sunday’s performance in awhile.

“I think it took the defense hanging in there, I think that was the key. I thought our defense kept us in it by battling the whole time, and not letting kind of bad offense dictate that we were going to stop guarding the way we’re capable of,” Majkrzak said. “Those are the games that I love coaching, when it feels like the other team isn’t getting anything easy, every look is really hard. Even the shots they made tonight I thought were contested and tough. I love coaching that because at some point if you have good players, your players will go make some good plays. I thought offensively we didn’t flow great, we didn’t do all that stuff perfectly but at the end of the day, our guys made some big time plays individually.”

NMU had four players in double figures and were led by sophomore forward Ben Wolf’s 13 points. Junior guard Max Bjorklund finished with 12, junior forward Dolapo Olayinka had 11, and junior guard Tre Harvey rounded out the group with 10. Sophomore guard Noah Parcher had eight assists to go with five points, combining that with his 12-assist game on Saturday. A balanced performance like that leads to a happy locker room.

“Definitely [locker room is feeling good], I think it’s fun when guys are unselfish, I think it’s fun for everyone. I thought obviously Noah [Parcher] [with] 20 assists on a weekend, that’s just special. But on top of that the kind of thing that really makes everyone have fun with it is Max [Bjorklund] scored 29 last night [Saturday] and he turns around and only shoots eight shots today,” Majkrzak said. “That’s the type of leadership that you know, everyone thinks leadership is rah-rah speeches and yelling and all that kind of stuff. To me, real leadership is being humble enough to take eight shots and then play great defense and be a great teammate when you know you’re capable of scoring 30 like he did the night before.”

Sitting with a .500 record of 8-8, Northern Michigan closes out the regular season with a road series with Purdue Northwest next weekend on Feb. 26-27.