A week to spread goodness 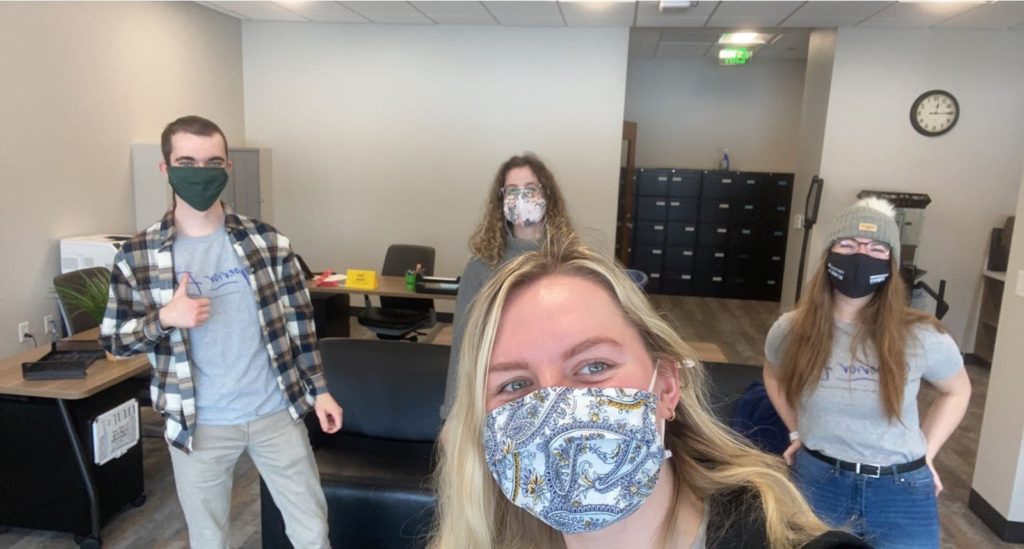 The Center for Student Enrichment is hosting Spread Goodness Week on campus March 8-12. Part of the week-long activities the CSE has organized is a collaborative Spotify playlist, aptly named “Radiate Positivity,” that will be open to all of campus. The playlist consists of songs that make people happy. Students are encouraged to listen and add their own songs to the playlist, said Mackenzie Meyer, senior double majoring in Secondary Education Spanish and English, who is heading the event.

“It was so fun and interesting to see the different happy songs,” Meyer said.

CSE did a test run with the office staff. They made a playlist labeled “staff picks” and asked staff to add songs that made them happy. One of Meyer’s co-workers commented on how different the music styles were, saying they get whiplash every time they listen to the playlist, Meyer said.

“I generally want to see what all of campus thinks because most of it was pretty indie,” Meyer said. “It’s not necessarily my style, but it was fun to listen to.”

Meyer added some of her happy songs to the playlist, such as “Dynamite” by Tiao Cruz and “Mirrors” by Justin Timberlake. The playlist can be accessed by visiting The Hub.

The CSE is also hosting a book giveaway all week in Harden Hall 311. They collected donations for books last week and received donations from Peter White Public Library and the Languages Literatures and International Studies Department. The books are not able to be quarantined each time someone touches a book, so CSE asks that people use hand sanitizer when they enter the room, said Dallas St. Onge, a member of CSE majoring in speech, language, and hearing sciences.

“Students can donate books, too,” St. Onge said. “Just bring your books to the book giveaway and we’d be happy to put them on the shelves.”

Another aspect of Spread Goodness Week includes taking food donations for the Food Pantry. All non-perishable foods are accepted, such as canned fruit, boxes of mashed potatoes or stuffing. The residence halls will have donation boxes, as well as a box in Harden 311. Donations will be accepted all week but are not required, St. Onge said.

“Ramen doesn’t count, because it doesn’t have a nutritional value,” St. Onge said.

Alpha Psi Omega, a nationally recognized theater honors society, is giving away carnations in Jamrich on Wednesday, March 10, between 10 a.m. and 1 p.m, although the end time is tentative and depends on when they run out of flowers. They are calling them, “Congrats! You’re Halfway There!” Carnations, said the vice president of Alpha Psi Omega, Sylvia Bednarczyk, who is majoring in fine arts for theater technology and design.

“Find the positives in the little things,” Bednarczyk said. “If you see something you like (like someone’s new hair color), compliment it; if you see a sunset that makes you think of your closest friend, snap a picture and send it to them. Share joy with those around you.”

A good way to spread goodness, especially right now, is to acknowledge that we are all going through really tough times. There are easy ways to spread goodness, like sparking a conversation with someone or asking someone how they are doing, St. Onge said.

“The happiness that you could give to someone could really make their day and completely give them a different outlook on what’s happening right now,” St. Onge said.

Spreading goodness can be implemented in our daily lives. It can be the smallest thing. You can buy someone’s coffee or hold the door open for someone, Meyer said.

“Because of COVID-19 and the stress in all of our lives, we are losing that outward goodness that this campus has always, to me, had,” Meyer said.

In her time at NMU, Dravland was a part of Superior Edge and loved the volunteer work she participated in. It was hard to be as involved as she wanted to be because there were so many causes that needed attention.

“As I started volunteering, I became sorta addicted to it,” Dravland said.

In early 2017, Dravland narrowed down the idea of spreading goodness down to an event. She spent six months developing the marketing for the Spread Goodness Day non-profit and building something she hoped people would engage in to help Dravland change the world with goodness. They launched Spread Goodness Day on Oct. 28, 2017, by posting on social media.

Every year, the awareness of Spread Goodness Day quadruples, according to Dravland’s estimates, based on the number of website visits and participation.

“It’s never been about doing good on this one day,” Dravland said. “But just like anything else, if you do things collectively, as an organized mob, if you will, you can see the power and the impact.”

People aren’t required to share their experience, but if they share the goodness they see on the Spread Goodness Day website, on or after March 12, the non-profit is giving out 20 single passes to Escape Marquette, five gift cards for free border grill meals and a picture of the Ore Dock that Dravland’s friend painted, to those who share their experience, Dravland said.

Several businesses have stepped up and are doing different events that will spread goodness throughout the community. Many businesses that participated last year are participating again this year.

Getz’s is doing two things. They are hosting a food and supply drive for the Women’s Center and the Harbor House. People can bring three items of non-perishable foods, sanitation or household products or toilet paper. Getz’s will be giving out a free gift to those who donate. They have a swag bag of commercial items and gifts from the store that people are able to choose from. They will be donating 5% of all sales made on March 12 to the Children’s Museum, Dravland said.

Both last year and this year, Wattsson and Wattsson Jewelers have been gift wrapping and hiding jewelry-related presents from their store and posting pictures on social media as clues to where they hid the gifts, Dravland said.

“I did a little chasing, and it was funny to see four or five people sprinting out of their cars at different locations,” Dravland said.

Dravland’s mission is to spread goodness throughout the community and the world as a whole. Her hope, this year, is to blow up social media with the hashtag, #spreadgoodnessday. Dravland asks that students and the community participate in the social media blow-up by posting about the good they witness on March 12 and tagging the non-profit on any social media platform.

“I want to see the social networks and news media completely overwhelmed with goodness,” Dravland said. “I want to see the interweb go crazy with positivity.”CSE is also planning on offering DIY herb gardens and postcards to students, Monday, Thursday, and Friday in Jamrich. Read more about the postcards and DIY herb garden. For more information about Spread Goodness Day, go to the Spread Goodness Day website, spreadgoodnessday.com.