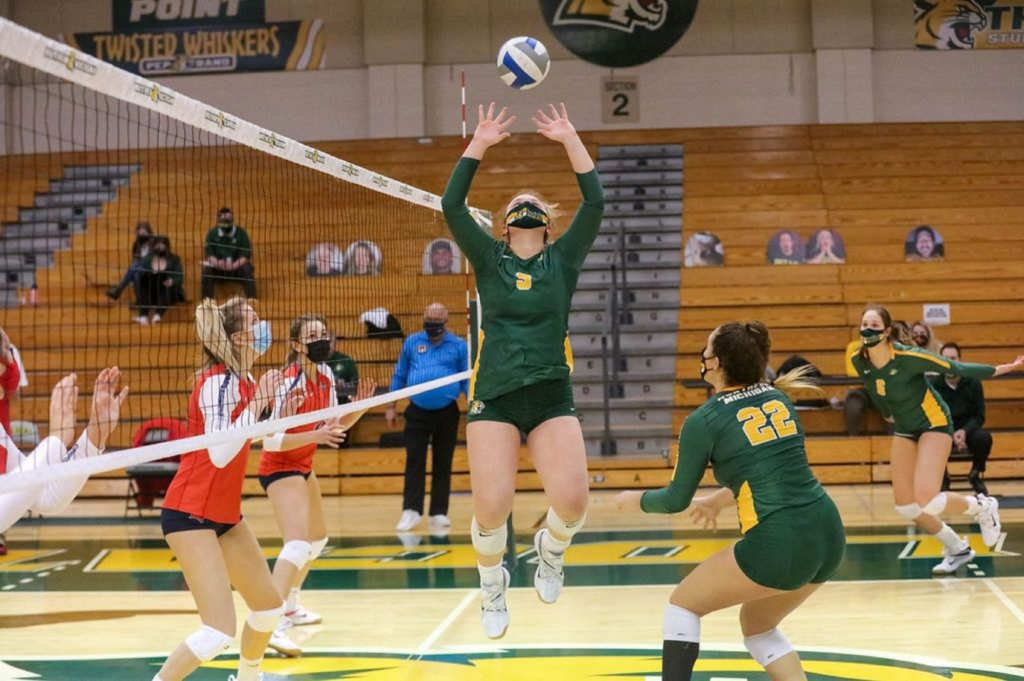 ALL THEY DO IS WIN—Sophomore setter Lauren Van Remortel sets the ball for one of her NMU teammates earlier this season. The NMU Women's Volleyball team is off to a strong start this year, winning seven of their first eight games. Photo courtesy of Lauren Van Remortel.

The NMU Women’s Volleyball team recently faced off against Northwood University and added to their win streak with a sweep over the Timberwolves. The Wildcats are now 7-1, having only one loss to Ferris State at the beginning of the season.

The team has a heated win streak of seven leading into their next game this weekend against Lake Superior State and they hope to add to that winning streak to showcase how far they have fought this season. For now, the girls celebrate their victory with confidence as they hold the number one seat in the GLIAC North Division and over the rest of the conference.

“I fully attribute our success this season to the grit we show every day in practice,” sophomore setter Lauren Van Remortel said. “We have a very solid team from top to bottom, so practices are always competitive. It’s been fun challenging each other, and getting better because of it.”

Like many teams this season, the volleyball team is faced with the challenge of dealing with COVID-19 restrictions and rules. The athletes have had to adapt to practice with masks and limited time on the court, but they have found a way to engrain it into their systems. Even with these restrictions, the ‘Cats still find a way to make the best of it and show their edge on game day.

“At first, practice restrictions were tough. Playing any sport in a mask is not easy, but now it’s become almost second nature,” Van Remortal said. “We’re just so happy that we’ve been able to play, so we are willing to make all of the adjustments needed in order to keep doing what we’re doing.”

Along with restrictions, there is also the common problem of team bonding. With new players coming in there is a real problem of not getting the same experiences that their senior teammates had in their first seasons. Bonding off the court leads to teamwork on the court, and the team needs it more than ever in these tough times so they make the most of what they have.

“The biggest bummer was the restrictions in regard to team bonding. It was hard to get together and do the fun things we typically would do, but we’ve made it work,” junior libero Alli Yacko said. “We are always growing as a team and it’s something special to be a part of. With every win, we are only getting better.”

The ‘Cats keep practicing and get ready to show where they stand with a work ethic to prove that a pandemic will not slow them down this season. The team, along with our other great teams, hope for a healthier season next year, but they still won’t let this one go to waste. One win, one set, one point at a time is the Wildcats’ focus on the competition and to keep on moving forward.

“The one thing we harp, and I’ve been harping since the first match of the season against Ferris, is one in a row,” Head Coach Mike Lozier said. “If you can get one in a row, a bunch of times in a row, you’re in good shape.”