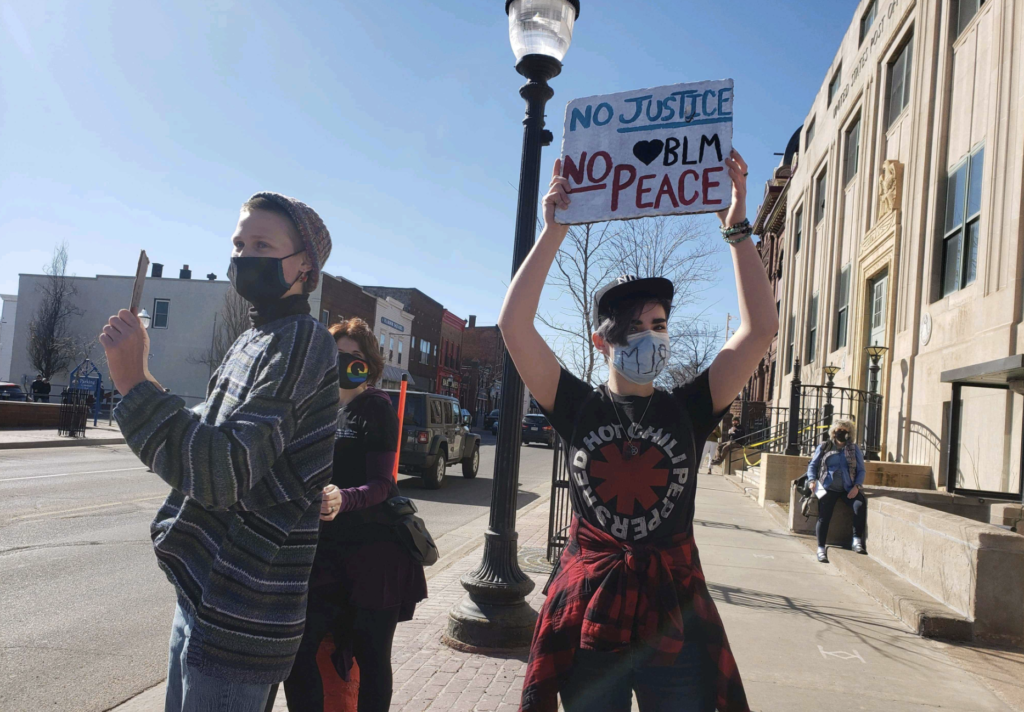 To showcase remembrance, solidarity and action Social Justice For Us held a protest on Friday, March 19 from 4 to 6 p.m. in front of the Marquette United States Postal Service with a moment of silence at 5 p.m. to remember those who have passed. The Facebook event reached 37 people with around a dozen participants.

“With respect to this weeks violent and deadly hate crimes in Georgia and the ongoing trial of D.C., we feel it is necessary to band together to show our city and the world that this is not something we will stand or sit idly by and witness, not then, not now, not ever,” the SFJU Facebook post said.

One of the participants in the protest was Sarah Pilto, sophomore education major. Pilto heard about the protest on SJFU’s Instagram and shared the event with Women For Women, an intersectional feminist group at NMU.

“Women for Women’s purpose is to promote education, service and leadership throughout the NMU campus and Marquette community,” according to the Women For Women webpage. “We do this by introducing others to health, sexuality, equality, empowerment, civil rights and other issues.”

For Pilto, protests are the first step towards enacting change. Pilto said that protests bring light to things that are happening in society that many people may not be aware of. When protests happen, they are a way to rally support for a cause.

“I hope that the Marquette community sees that the racial injustices that are happening across the nation, and have been happening, are not secluded instances and that we as a smaller isolated community can still play an active role in changing these injustices,” Pilto said.

“As a leader of a small community in the dorms and a member of Women for Women, I can see the hard work of individuals and groups on campus. ASNMU, the student government on campus, provides a lot of support to these organizations and movements. As a whole from the university, I see a lot of performative activism, and not a lot of intent on making real change,” Pilto said.

Skinner believes that the first way Marquette community members can help the BIPOC community is by simply being an advocate and to stand up and say something when you see something wrong.

“The biggest problem we see is the lack of acknowledgment that people of color face greater adversity. Another important aspect is education, being willing to open your minds and correct misinformation would be a great start,” Skinner said. “There is so much hate being spread now. If we could put just a little energy towards love it would improve all our lives.”

After the pandemic when things return back to normal, Pilto would like to see the community and university come together to explore the diversity that is at their doorstep. As a member of the LGBTQ community, Pilto sees lots of diversity within the community that goes unnoticed and unseen.

For NMU students and Marquette community members looking to use their voice to help impact the community and university as a whole, organizations that are working towards bettering the area are Social Justice For Us, Women For Women, NASA, ASNMU and the office of Diversity and Inclusion.