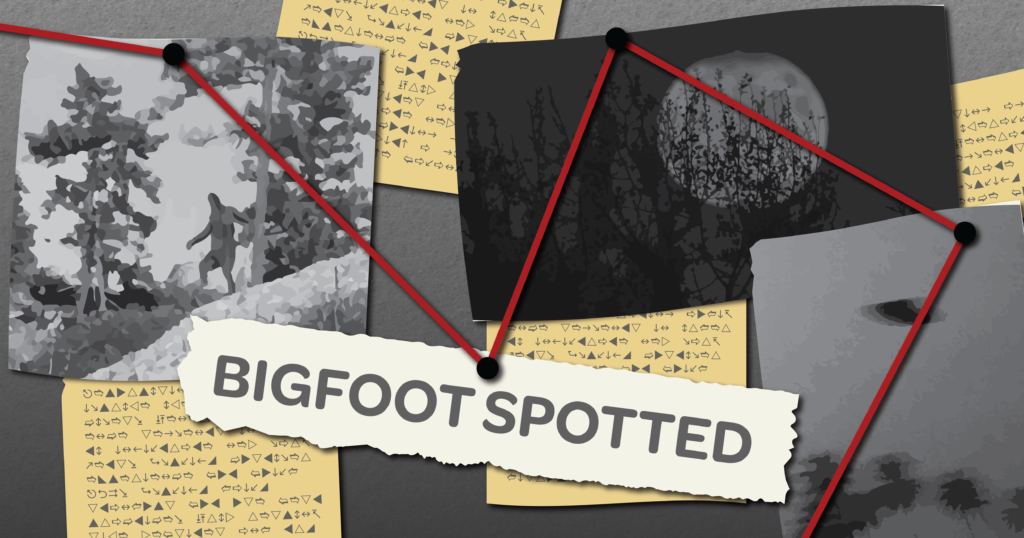 Imagine sitting in class, listening to your professor’s lecture on the different techniques used to examine evidence, when the professor’s wife, dressed in a wolfman costume, runs into the room howling. Before you are able to process what just happened, she is gone. Immediately following the incident, you are asked by the professor, Scott Demel, an anthropology professor, to write down what you just saw. What clothes the person was wearing? What did they look like? What sounds did they make?

Despite being in the same room, during the same time, seeing the same event unfold, the eyewitness accounts will always vary. The perspectives are different, even in the small classroom. This exercise is part of the four-credit course, AN 315 Myth, Mystery and Fraud, which Demel teaches every other winter semester, as an elective.

The course is about a lot of different topics that come up in anthropology and myth and mystery, Demel said. The idea behind it is assessing claims and how to go about determining if something is real. It teaches students how to be skeptical of the story’s context and what is the source.

From Bigfoot to the pyramids in Egypt, the AN 315 class examines the truth behind such claims, and teaches students to think critically and be a good skeptic, said Ella Uren, a senior majoring in anthropology.

“I was looking at anthropology classes and it just sounded interesting,” Uren said.

This semester, AN 315 has a variety of students that have osteology and morphology backgrounds, which, in the case of Bigfoot (aka Yeti, aka Sasquatch, aka Wild Man), allows the students to look at gorilla hip structures and compare them to humans. The students can look closer at if Bigfoot is human.

“My favorite part of the class is having serious conversations about these myths,” Uren said.

The Cardiff Giant was one of the biggest hoaxes in American history. Found in 1869 by workers digging a well in Cardiff, New York, the 10-foot tall stone giant was thought to be a petrified man. People flocked to see the giant. When experts finally got a look at the giant, they found it to be fake.

“It was really surprising because you could see how it began and how they created the fake and how it ended,” Uren said. “You could see the full progression. You usually don’t get that a lot.”

In another lesson, the class was presented with a video of a man claiming his trailer was destroyed by Bigfoot. The students examined the video as to whether it was true or not. There were claw marks, but Bigfoot is not normally depicted with claws, Uren said.

“I just think it’s a really good class. Especially to be taking now, when the internet makes it so easy to be faking things,” Uren said.

Other than having his wife run into the classroom screaming, Demel uses other exercises that test the student’s eyewitness accounts.

Demel did an exercise where the students look at their feet with their shoes on, and then do an estimate of the length of their feet and then measure them, as well as asking the students to estimate the height of the Bigfoot cast he has in his office. He flashed a picture of an eel fish on the board, then asked the students to describe it. He asked how long it was, what color it was, everything. The exercises are to show how eyewitness accounts can vary.

“Everybody is really bad at length estimates,” Demel said.

All semester, Demel has been feeding his class bits and pieces of information on the Bigfoot phenomenon. Every class period, he shows a video or photographs of Bigfoot, even voice recordings of people claiming they saw Bigfoot. By the end of the semester, the class will be forced to choose sides on whether the creature exists.

The class will break into two teams for a debate: pro-Bigfoot and anti-Bigfoot. They will have a few weeks to create their arguments and their conclusions, which they will present to a team of neutrals, made up of an odd number of different community members and NMU faculty and staff. There is even a panel of experts present. Each team will have to present its findings to the neutrals, and get them to sway towards their team, Demel said.

“It’s kinda fun,” Demel said. “I always have odd numbers of neutrals, so that whoever wins, gets extra points for winning the debate.”

As a child, Demel traveled out West with his family, where was exposed to the idea of Bigfoot. He had books on it growing up. He is still interested in Bigfoot and reading about it.

“People always ask me, ‘do you believe in Bigfoot?’” Demel said. “I always say, ‘I believe in the possibility.’”

Next year, Demel is taking a one year sabbatical to work on his upcoming book about Beaver Island, which is the largest island on Lake Michigan. The book will focus on the flora and fauna of the Great Lakes over time, as well as all the research Demel has been doing on the island every other summer since 2010, doing an archaeology field school with students.

“I’ve always been interested in the coastal studies of the Great Lakes and what drew people to the coast and to islands,” Demel said.

Demel focuses not only on the archeology of Beaver Island but also on what he calls the “remoteness factor,” which is how people who are in faraway places, such as remote islands or on a frontier, are affected by the remoteness. Demel plans to travel back to Beaver Island and to the Smithsonian, which has some artifacts from the island.