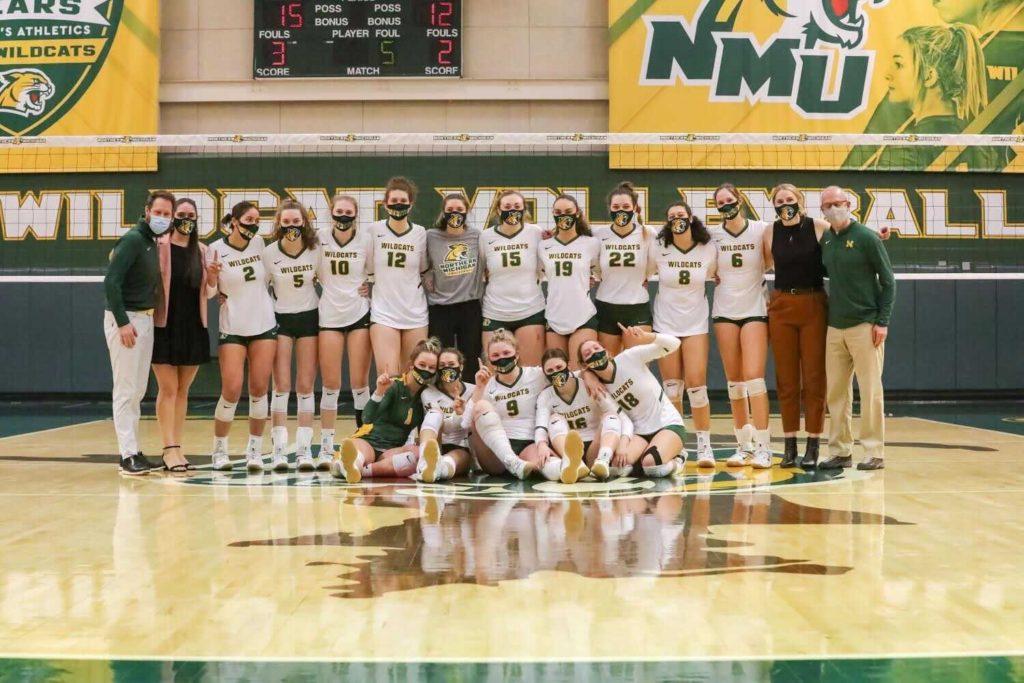 CONFERENCE CHAMPS—The NMU Volleyball team earned a share of the GLIAC title with Michigan Tech after splitting the series against the Huskies this past weekend. The 'Cats open up GLIAC Tournament play as the second seed. Photo courtesy of Meghan Meyer.

This past weekend marked the final series of the regular season for the NMU Women’s Volleyball team. The Wildcats finished off the season strong with a split against Michigan Tech University and won the second match 3-2 to seal up a share of the GLIAC Championship.

The Cats have an astounding 12-2 record and hold most wins in the GLIAC but share the championship title with Michigan Tech who played fewer games. Although there is the unusual sharing of titles between the rivals, no one is more deserving than the Wildcats.

“We’re calling ourselves conference champions,” Head Coach Mike Lozier said. “Anyone else who has been told by the GLIAC that they can call themselves the GLIAC champion has every right to do that.”

The Wildcats hold the most wins and least number of losses, even when compared to Tech’s fewer matches. They may share the title but they know that in the end, they came out on top. The athletes are excited for what is to come in the GLIAC Tournament this weekend and hope to prove who really is this season’s champion.

“It doesn’t matter that they are calling us co-champs with Tech. I know and everyone knows that we have won the most games and lost the least,” freshman middle blocker Meghan Meyer said. “We worked so hard as a team all season with a goal of being conference champions. We deserve the title conference champions no matter what they say about us being co-champs.”

Saturday was the first open match where spectators were allowed to cheer the players on. With the home field advantage and the support of the crowd, the ‘Cats were able to take down Michigan Tech and show them that Friday’s loss was just a learning experience.

“The fans did nothing but amaze our entire team. They were extremely loud once they stepped foot into the gym and we couldn’t have asked for a better crowd,” freshman outside hitter Jacqueline Smith said. “As far as the game itself goes, we were excited and ready to play Tech on our home court after losing to them the previous night on their home court.”

With their victory and status comes the pressure of being the one to take out. The Wildcats know that they are going to be targeted and taken seriously in every match they face in the future. For a team who has led the conference all season long, their confidence is showing at the right time.

“I think this past weekend gave us the confidence we needed to go into the tournament. Now that we have proved ourselves, we are bound to have a target on our backs,” junior libero Alli Yacko said. “Regardless of the outcome, I am beyond proud of everything we’ve accomplished as a team thus far.”

The Wildcats await to face their next opponent that will be determined between the winner of Friday afternoon’s Davenport/Lake Superior State match. NMU will take the court at Saginaw State University in the GLIAC Quarterfinals on Friday night at 7 p.m.