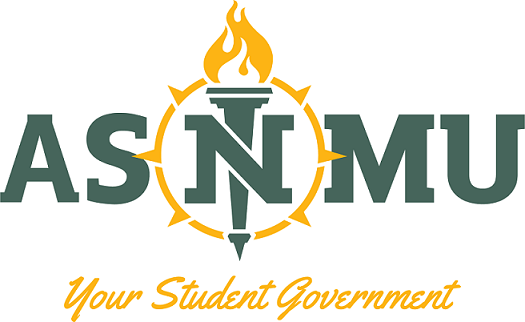 The Associated Students of NMU met at 6 p.m. Tuesday, April 13 to give reports on what members have been working on since the previous meeting and to swear in the electorates who won the 2021 general election. The virtual election, which happened last week Monday, April 5 through Wednesday, April 7 saw candidates for the president, vice-president, off-campus representative, college of art and science representative, college of business representative and the college of health sciences and professional studies go head-to-head in the hopes of securing one of the roles.

Bethany Beavers won the presidential race against contender Zora Binert with a vote count of 427 compared to Binert’s 258. The vice-presidential race was a close competition with Thomas Kettler securing the seat with 371 votes compared to Olivia Furhman’s 317. Following the results of the election, Beavers said that she is excited to step into the new role and begin working on policy that supports students.

“I hope to improve student access to health care on campus (both mental and physical). I also hope to make a tangible improvement in supporting diverse communities and promoting policy that provides the resources these communities need for success as a student at Northern,” Beavers said.

There were 701 votes total in the election which is an increase of 269 students compared to the 2020 ASNMU election. Although the total is higher than the previous year, it still remains only 10.7% of the 6,554 students currently attending NMU. ASNMU planned to hold in-person debates to further spread publicity but chose not to due to concerns of how to make the event safe abiding by university COVID-19 guidelines.

“This election is the first in a couple of years where both executive board positions were contested. The elections committee continues to explore new ways to market the polls to students, especially with campus safety guidelines,” ASNMU President Emma Drever said. 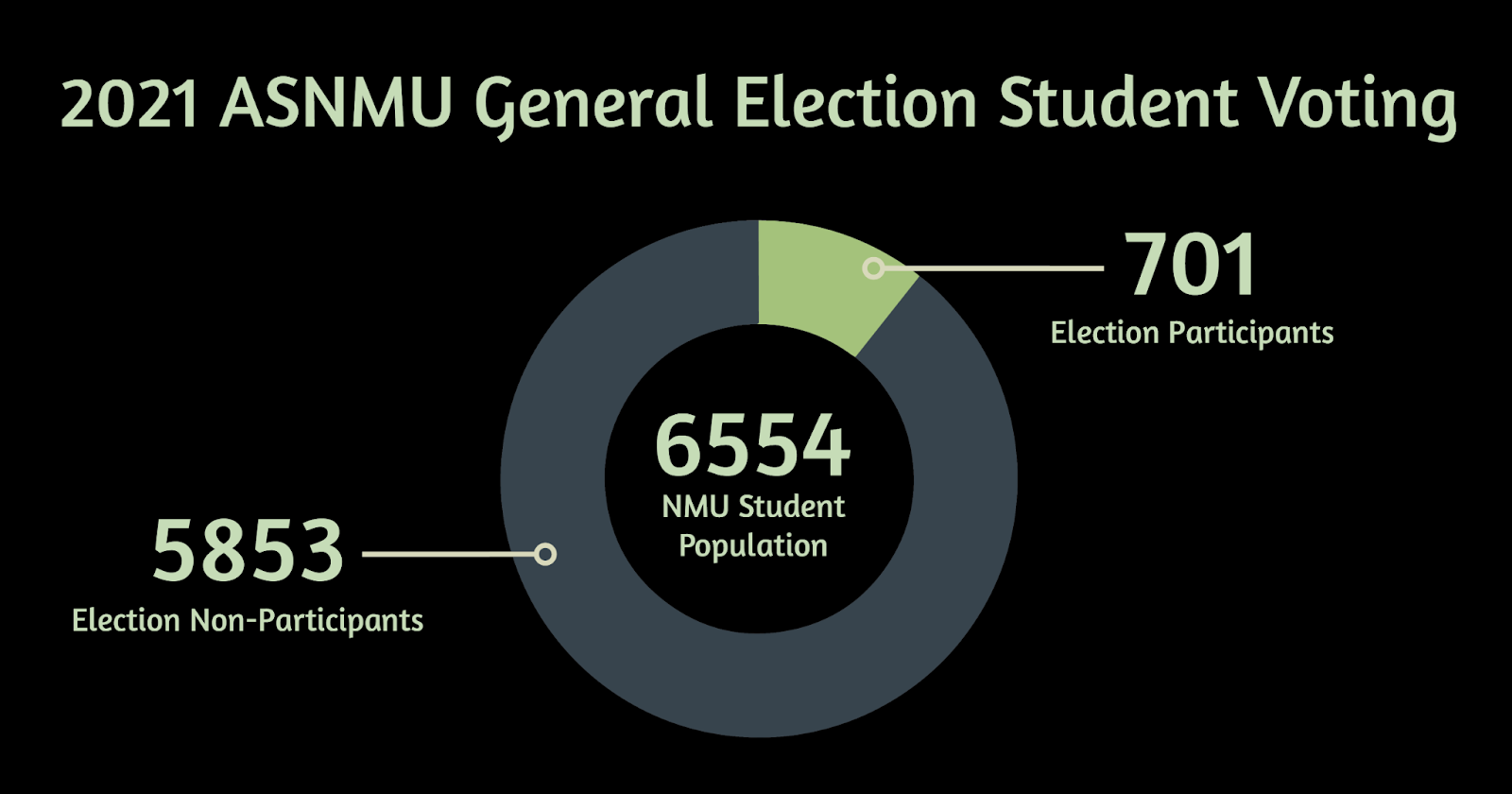 The meeting began with final reports from the current assembly. First up, Drever gave her final report. She shared an update on the blocking of the appointment of Jason Morgan, former ASNMU president, from serving on NMU’s Board of Trustees. Drever and Dwight Brady, president of the faculty union, spoke with senator Ed McBroom regarding the status of Morgan’s appointment. According to Drever, McBroom said that he is no longer in control of the blocking of Morgan to the BOT and that he will try to get the State Senate to approve his appointment. If the appointment is continued to be blocked, Morgan will be automatically appointed after 60 days.

Drever then spoke about how students were pleased with the reopening of the grad closet which allows students to borrow caps and gowns for use during the graduation ceremony. Previously, the grad closet was closed due to COVID-19 safety procedures.

Beavers gave her final report as vice-president. She began her report by speaking about the president’s committee on diversity and how she’s working with the group to support the revision of the Marquette Senior High Schools mascot. The mascot the Redmen has caused controversy over its name and racist depiction of a Native American wearing a headdress. The school removed the image as their logo, but the name still remains the same. She plans to present a specific wording of the plan at the committee’s meeting on April 16. Beavers also spoke on the Diversity Student Alliance request to allow the diverse student organizations, the Native American Student Association, Black Student Union, LatinX Student Union, Queers and Allies and Women for Women to occupy the space of the current housing and residence life offices, which plan to move. Lastly, she touched on conversations she’s been having about the future of the on-campus restaurant Melted and what should be its replacement. One of the ideas she said was suggested is a pop-up restaurant where each week a restaurant from the Marquette community is allowed to use that space on campus.

Sammi Metcalf, ASNMU treasurer, gave her final report. Metcalf reported ASNMU has $13,191 remaining in its budget for the semester. Additionally, she reported that the student finance committee is ending the semester with $47,383 that can be used to fund student activities in the Fall 2021 semester.The last report given was from Kylie Lanser, chair of the assembly. She touched on a faculty demonstration in response to their summer contract negotiations. The demonstration is scheduled for today April 15, from 4-6 p.m. starting in Jamrich Hall and ending at Cahodas. Faculty members are asking for their cost of living adjustments to their wages to be included in the new contract.

Once the reports were finished the group moved on to reviewing the year-end budget allocation reports for WUPX-FM, the North Wind, Student Finance Committee and ASNMU. The reports were approved and the organizations were found to be adequately utilizing their funds from the Student Activity Fee.

Next up on the agenda was an overview from off-campus representative, John O’Bryan regarding Earth Week alongside a resolution for ASNMU regarding specific ways NMU can work towards carbon neutrality. Earth Week is hosted by NMU’s Conservation Crew and will be a 7-day event from Tuesday, April 17 to Friday, April 23, with multiple presentations and community preservation efforts. Some of the events include community cleanups, trail maintenance, webinars and presentations from the Two Degree Climate Challenge hosted by NMU’s chapter of the Citizen Climate Lobby.

O’Bryan presented a proposal he authored focusing on urging NMU to commit to carbon neutrality by the year 2050. The resolution begins outlining President Joe Biden’s plans to bring the U.S. to net-zero emissions and how the state of Michigan is following suit. O’Bryan wrote in the proposal six specific plans NMU can commit and implement to reach the goal of carbon neutrality:

1. Encouraging the use of the student Green Fund for student projects that lead to cost-effective emissions reductions by formally agreeing to return the resulting university cost savings back to the Green Fund to the amount of the initial investment, adjusting for inflation.

2. Using low-carbon construction methods and materials in new buildings and renovations starting with the Jacobetti renovation to reduce emissions associated with construction.

a. Mass timber construction shall be prioritized over steel and concrete, which will also showcase NMU’s commitment to sustainability and attract students.

b. Energy efficiency standards above LEED shall be used, especially PHIUS, ILFI, and DOE Zero Energy Ready, to improve building performance and significantly reduce energy use.

3. Carbon reduction measures implemented by the university shall be prioritized based on transparent economics that reassures students that the most cost-effective approach is being taken.

a. For example it shall be shown that a measure results in more carbon savings per dollar invested over alternative measures. This can include non-carbon benefits or costs associated with options, e.g. the student attraction benefits of a measure.

b. The most effective, the simplest way to quantify this is the implementation of an internal carbon price.

4. Produce a request for a proposal for on-site solar energy and solar + storage for each of NMU’s separately metered buildings or groups of buildings on the electric grid.

6. Rapidly transition the university’s investments away from fossil fuel holdings at least as aggressively as BlackRock investment, the largest investment firm in the world.

“That aspect of the resolution is particularly important [carbon pricing] as Congress decides how to fit Biden’s American Jobs Plan into a legislative package that will pass through the Senate in the ‘reconciliation’ process. The Higher Education Carbon Price Endorsement Initiative has been advocated by groups such as Citizens’ Climate Lobby, which has a student chapter here at Northern. As a member of that organization, we believe that the moment is upon us to do all we can to influence the legislative process in favor of a fair, effective policy that benefits the most people, especially low-income and disproportionately affected communities,” O’Bryan said.

The proposal was approved by ASNMU unanimously and will be used to urge NMU to take specific actions towards carbon neutrality. After the proposal, the group moved to dissolve the 2020-21 assembly and swear in the newly elected members.

With the former assembly resolved, the new executive board began with their reports. The first report was from new ASNMU President Bethany Beavers where she outlined her goals for the president position.

“I want to say thank you to everyone who voted me into this position and supported me along the way, it means the world. My plan is to increase diverse perspectives within the ASNMU assembly through reaching out to diverse student organizations in order to adequately represent them within the higher level,” Beavers said.Beavers also said she wants to focus on providing health care for graduate students. She hopes to work with the graduate students to create a proposal that is implemented by the university to grant them increased access to health care. She finished her report by also committing to working on mental health on-campus and providing more mental health resources for students.

“I want ASNMU’s top priority over the next year to be unity, both amongst ourselves and on campus. Bringing campus together in representing a unified front that represents many different types of students for the bettering of all students,” Beavers said.

The next report was from newly elected vice-president Thomas Kettler. His report focused on showing appreciation for those who supported him in the election. Kettler then continued the appointment of the new assembly. Sammi Metcalf was re-appointed to her position as treasurer following the approval of an appointment proposal presented by Beavers in a closed vote amongst the assembly.“Sammi’s dedication to SFC and ASNMU has shown through her commitment to organizing past records, to make event ideas and paper trails infinitely more accessible. Her prioritization of this organization and her role in it has allowed numerous student events to occur, through which students have been served,” the proposal says.Metcalf’s appointment was approved unanimously following a closed vote 6-0-0, but will only be a temporary appointment through April 22, 2021, since she is graduating this semester. Next, Beavers presented another proposal for the appointment of Emily Martens, college of business representative, to the treasurer position following Metcalf’s graduation.

“Emily’s dedication to SFC and ASNMU has shown through her commitment to maintaining open channels of communication with each and every member of ASNMU, as well as always being willing to take on tasks in aid of larger projects. She is reliable and has been a valuable asset to ASNMU as a college of business representative, and SFC board member,” the proposal says.

Hanah Roose, college of health science and professional studies representative, was nominated for the director of public relations. Roose was appointed to the position unanimously with a 6-0-0 vote. The group decided to table the appointments for the chair of student affairs, chair of academic affairs and director of external affairs since there were no nominations for the positions. If students are interested in joining ASNMU to fill one of these roles they should fill out the general assembly application via their website or by visiting ASNMU’s office at 1201 University Center.

ASNMU will hold its next meeting at 6 p.m. on April 20, with options to attend in-person or over Zoom. Those interested in attending can register via the Hub and will be provided a room number or Zoom link.