Professors rally for raise after freeze in negotiations 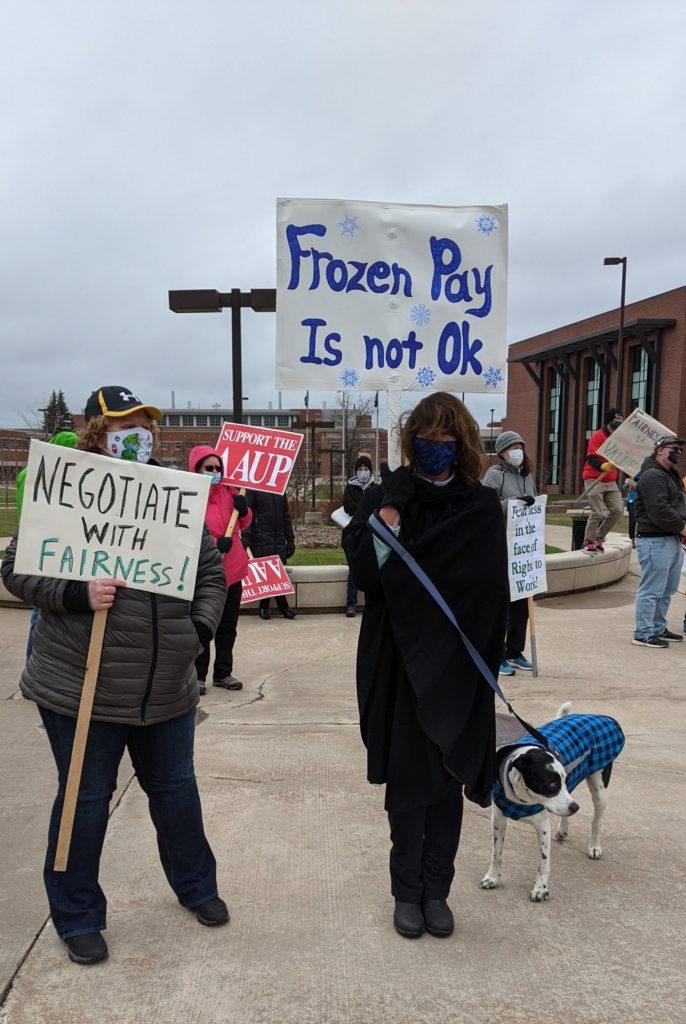 Katarina Rothhorn/NW FROZEN PAY—NMU community members gathered on April 15 to rally from Jamrich to Cohodas Hall. This demonstration was a response to NMU’s administrative decision on April 6 to halt financial negotiations until after the Board of Trustee meetings that take place at the end of the month.

Despite the freezing wind threatening to blow over their signs, protesters wrapped up hats, scarves and winter jackets marched from the wildcat statue outside of Jamrich Hall to Cohodas Hall on Thursday, April 15 amidst a sea of bright red “support the AAUP” signs. As they chanted and circled Cohodas Hall twice, the 29-degree wind chill and cloudy skies perfectly fit with their catchphrase of choice: “frozen pay is not ok.”

This demonstration was a response to NMU’s administrative decision on April 6 to halt financial negotiations until after the Board of Trustee meetings that takes place at 11:30 a.m. on April 29.

“This means we are losing nearly a month of critical time to reach a deal on a contract, and we felt it was important to have a public show of solidarity before the end of the semester,” NMU’s American Association of University Professors Faculty Union President Dwight Brady said in a press release on April 14.

These financial negotiations between the administration and teaching faculty members are regarding the currently frozen salaries for all professors at Northern. Last semester, faculty received a 0% pay raise, mainly due to COVID-19 budget-related concerns and the threat of lower student enrollment. At the same time, the cost of living continued to increase and NMU received COVID-19 relief packages from the state and federal governments.

“The price of living goes up, gas, milk, everything else costs more, interest goes up on loans that you have that are variable rate, the rest of the world keeps increasing in terms of what it costs to live here,” Jon Barch, information officer for the AAUP, said. “But we took a 0% [raise] because COVID-19 and student enrollment might go down, we didn’t know what’s going to happen … Now we’re trying to negotiate to make up for lost time, to make up for the freeze. We’re trying to negotiate to make up for the already low salary that we receive compared to our peers.”

Compared to the 13 other public universities in Michigan, Northern ranks 10th, according to Brandon Canfield, associate professor of chemistry and data analyst for the NMU AAUP.

“To put it as simply as possible, we’re underpaid compared to our peers who do the same jobs as we do at the other regional universities,” Barch said. “That’s not a good thing when we’re trying to get high quality new faculty to come here, when we’re trying to feed our families and stuff like that. It’s just not good that we’re down near the bottom, we’re underpaid.”

The lower salaries are also a deterrent when it comes to hiring new and younger faculty. Brady said his main motivation for marching was to support the junior faculty who struggle more with lower pay and to continue to keep good faculty at Northern.

“These are the people that are in front of your students, mentoring the students here and also building a pathway for these students’ careers. Why would you want to settle for second best or third best? That is what is going to end up happening if you don’t keep up with your peers,” Brady said.

The faculty union is looking to secure a three-year deal with the university that would prevent their compensation from continuing to fall behind the salary averages at other Michigan universities, according to the union press release.

What is upsetting to most faculty members is that they have reason to believe Northern is more than financially able to meet their demands. The faculty union’s chief negotiator, Lesley Putnam, has looked into the university spending after better than expected enrollment numbers, surplus money from NMU health insurance costs, the CARES Act and other COVID-19 relief money and has every reason to believe the university can afford to pay their professors better.

“We know the money is there. We know there is a pool of over $3 million that faculty members overpaid into NMU’s health insurance program. We know that twenty faculty members were not replaced after retiring last year. We know the university received over $12 million in CARES Act funding and seventeen million more is on the way. We also know the end is in sight to this pandemic and enrollment figures for fall 2021 are looking much better than expected. So, the money is there, we just need to be able to get back to discussing it during our negotiations,” Putnam said.

Financial negotiations with the administration had been occurring throughout the weeks leading up to the April 6 announcement of postponed negotiations, and the union now has a shorter deadline to work with before their current contract expires on June 30.

“What [NMU is] doing is stalling the negotiation process until summer when the faculty are off when there’s a lot less ability for us to gather and have a rally and to make a stink about the salary freeze,” Barch said. “So we said ‘okay that’s unacceptable. Let’s have a rally. Let’s show our support now, because the stall is unacceptable.’”

Over 100 people, including students, nurses from the UP Health System nurses union, the Upper Peninsula Labor Federation, the Administrative Professional Union and other members of the community, showed up in support of the rally.

“A lot of times unions join together to show solidarity and support for each other … the faculty union is recognized, I think, as the most powerful union on campus. And if we don’t get raises, no one’s getting raises,” Barch said. “If we get raises, then the other unions can go to the bargaining table when it’s their turn and say ‘look, that’s not fair to give us nothing, you gave them a 2% raise, so we should get one too.’ … Whatever the faculty gets, you get some of that, but you’re never going to do better than the faculty. So you have to support and try to break the ice, pun intended for the salary freeze, you have to break the ice at the faculty level in order for anybody else to have hope of not getting a zero.”

During the rally, some members of the crowd vocally showed their support by giving small speeches and thanking everyone who joined. Among those who spoke were junior history student Mossy Schumann, nursing professor Jamie Crabb and Center for Native American studies professor Martin Reinhardt. A representative from the Upper Peninsula Labor Federation also spoke out in support.

“Equity is something that is very important, especially when it comes to our professors who are the backbone of this school,” Schumann said. “If they are not getting paid proper wages, that means we are not getting taught properly.”

The protesters also just want recognition for the extra work they have put in this semester. With new restrictions and protocols to work around due to COVID-19, professors have had to adjust and modify their teaching styles and curriculum to make it accessible to all students. NMU has continuously praised its staff for the work they have put in to make the adjustments necessary, but there has been little monetary compensation for this extra work put in.

“We know that everybody’s making modifications, the administrators are too, but when we have money and we’re underpaid and you say we’re great, pay us like we are great,” Barch said. “That’s kind of the thing that rubs a lot of people the wrong way, is they constantly say that we’re doing so awesome, and then the only thing they have to say about pay is ‘look at us, we’re one of the most efficient universities.’ But we’re understaffed and underpaid.”

“We look forward to continued fruitful talks on the many topics on the table. We will continue to work through issues, including budgets, with both the Board of Trustees and the faculty Union in a timely manner. The current contract goes through June 30, 2021,” Erickson said.