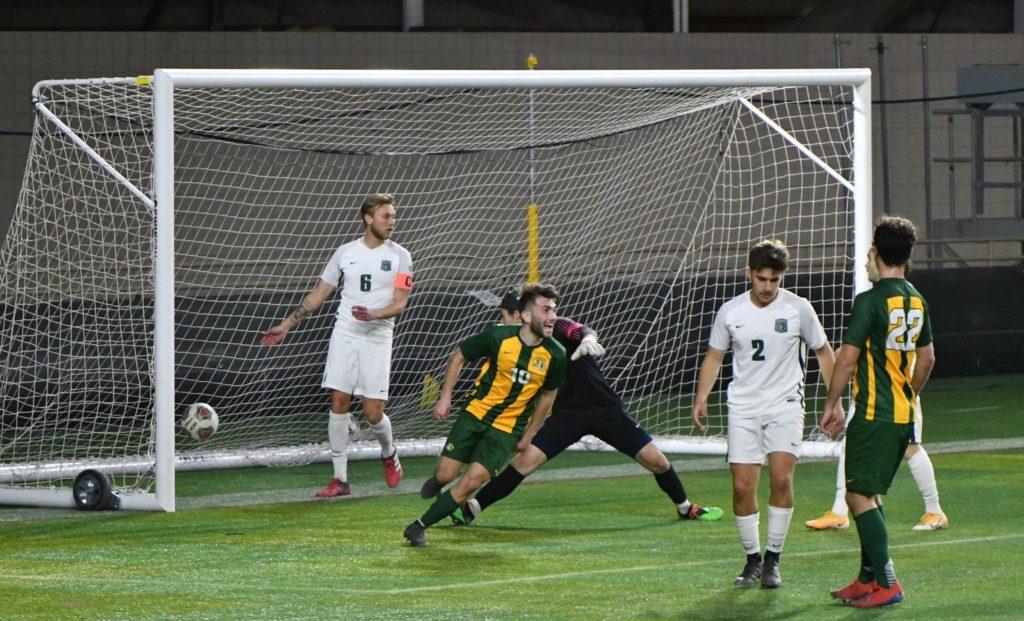 SOCCER SHOWDOWN—Graduate forward Emanuele Ancione celebrates his goal during NMU's 2-1 overtime loss to UW-Parkside on April 18. NMU looks to rebound in the GLIAC Tournament, where the Wildcats will face Davenport in the program's first ever postseason home game. Photo courtesy of NMU Athletics.

This weekend will mark history for the NMU Men’s Soccer team when it hosts its first-ever GLIAC Tournament game against Davenport University in the quarterfinals.

Northern (4-3) rode a four-match winning streak in the middle of the season to a winning record and the third seed in the GLIAC Tournament. For the team, it’s been nearly two years since their last conference tournament game in a 2019 quarterfinal loss to Northwood University.

“I think the first word that comes to mind is excitement. I mean we haven’t been playing in the [GLIAC] Tournament for a while; it’s been over a year since we played last against Northwood in the snow back in 2019,” senior midfielder Arni Eiriksson said. “So I think we’re just excited to get out there, especially because it’s the first home game we have in the tournament in the program’s history. We’re just excited to go out there.”

It’s been a different year in many ways for NMU, and having a new home in the Superior Dome instead of the NMU Soccer Fields has been nothing out of the ordinary. U.P. weather doesn’t like to cooperate in the supposed winter months, and now the Dome will be home to the first postseason men’s soccer contest.

“It’s huge, a real amount of gratitude to be able to use the [Superior] Dome as a facility and that work that it has taken within this pandemic time to make it all happen,” Head Coach David Poggi said. “No one would have expected it to be first of all playing in a conference tournament game in the Dome with men’s soccer. This will be a first for us.”

What might be even bigger is the opportunity itself to play against the sixth-seeded Davenport Panthers. DU (3-4) is coming off a three-match losing streak to close out what once looked like a promising regular season. Both teams are trending in different directions, but the Panthers had the upper hand on NMU with a 2-1 win at home back on March 14. The Wildcats are going to try and make adjustments the second time around in a match where both teams are quite familiar with each other.

“Yeah, we know the team well. We played each team in the regular season,” Eiriksson said. “Especially from that game [what] we can learn is being compact defensively. Unfortunately, we gave away a penalty kick on one of the goals that they scored, and another one came from a free-kick. We just have to be smart with when we foul and how we play.”

There is a clear duo of goal scorers for Davenport, as junior midfielder Evan Marquess and redshirt junior forward Matt Whelan are the only two Panthers that have multiple goals on the season. Against the Wildcats, Whelan and senior midfielder Daire O’Riordan scored DU’s two goals. For NMU to move on, stopping Davenport’s key players is going to be crucial.

“It’s another good team and a team that was picked to finish even higher than where they did,” Poggi said. “So I’m sure they’re going to be ready to come in and make a statement on their end, only they have to drive there and back and we get to wait for them to come to our place.”

The ‘Cats vie for their second-ever GLIAC tournament win and semifinal berth in school history when they host Davenport inside the confines of the Superior Dome on Sunday at 1 p.m.