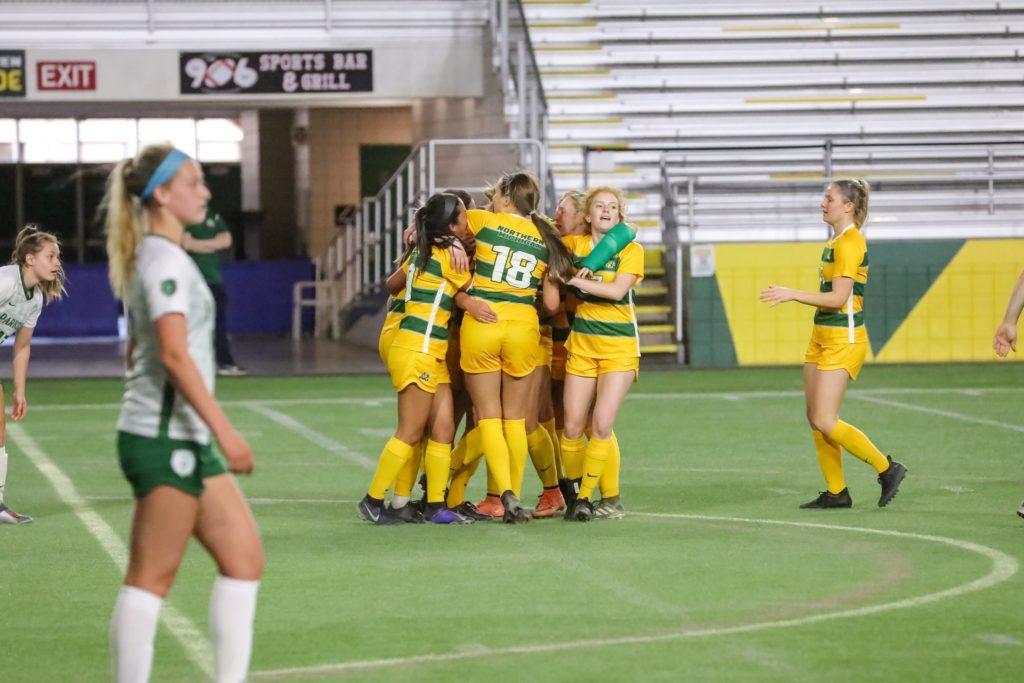 QUITE AN OPENING TEST—The NMU Women's Soccer celebrates a goal. The 'Cats will have almost two weeks of practice and a scrimmage under their belts when they square off with Division I UWGB in an exhibition match on Friday, Aug. 27. Photo courtesy of NMU Athletics.

The NMU Women’s Soccer team ended its regular season with two wins this past weekend. They started off with a shutout against Purdue Northwest University (6-0) on Friday, followed by their close battle with the University of Wisconsin-Parkside (3-2) on Sunday.

The Wildcats have made history with their most wins since 2015 with half the games played of a normal season. The ‘Cats end their regular season third in the GLIAC standings behind Ashland University, who they lost to previously, and first-place Ferris State University, who they drew to a stalemate in the previous weekend. These two victories provided the team with the momentum they need for their upcoming tournament.

“Both games started out slower for us than we would’ve liked,” junior goalie Shenae Kreps said. “But we seemed to figure out what we were doing wrong at halftime and came out much stronger. We needed two victories this weekend and we accomplished that.”

These athletes have come very far this year and have already proven that they can contend with the top teams. Northern was ranked to finish ninth in the preseason but after their tremendous showing, this season proved that they are not going to let that prediction stand.

“What’s crazy about this year, we were ranked ninth in the preseason and now we are proving everyone wrong,” junior defender Kiera Hau said. “Attitude this year is great, we don’t fear anyone we go into any game and think this game is winnable, same with the GLIAC tournament.”

Although the confidence gained from taking such strides is fueling the team’s spirits, the weight of the tournament shines through. The players know that they can’t let things get out of control and must learn from their previous games.

“We have been pretty happy with where we stand so far after conference play,” junior midfielder Caroline Halonen said. “It has definitely been good for the team to see better results than the past couple of years, but there’s always work to do. I don’t think anyone will be satisfied unless we perform well in the tournament.”

The Wildcats await the results of who they will play their first conference game on Tuesday, April 27. The ‘Cats prepare themselves for whatever team is in front of them,  and their excitement is up to a maximum to finish out the season strong.

“Emotionally we all are just so happy about how we are doing, it’s a competitive environment but we are still so excited,” Hau said. “We feel we have succeeded so far but we just need to keep pushing until the end.”