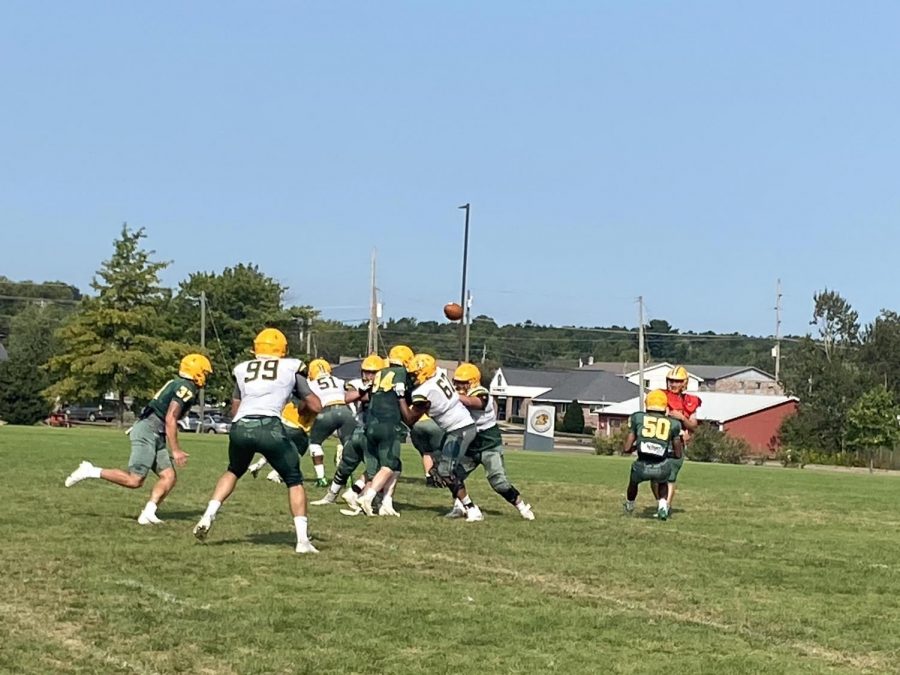 TRAINING CAMP TIME—Quarterback Drake Davis throws a screen pass to tight end Jake Witt at practice on Thursday, Aug. 19. The Wildcats are two weeks out from the season opener against McKendree in what promises to be an important year for the 'Cats. Travis Nelson/NW

Heading into his fourth season as the head coach of NMU Football, Kyle Nystrom knows how important this year is for the Wildcats. After going 5-26 in his three years and an entire year off last year due to COVID-19, this season has some emphasis on it.

However, there is a lot more hope for this year’s team, especially on the offensive side of the ball, Nystrom said. The Wildcats only averaged 15.2 points per game in 2019, and now with a turned-over roster including new starting quarterback junior Drake Davis, there’s an expectation that things change on that side of the ball.

“Is the offense more critical than ever? Absolutely. Do I have expectations? Yes I do,” Nystrom said. “There’s just a lot more emphasis on the offense, he’s [Davis] a guy who gives you a chance, he’s good enough to give you a chance. We just have to get him coached up and get him the right calls and do the right things that he can do and put him in the best spot you can.”

Nystrom has called training camp “blood and guts”, and that can be attributed to the intensity that has been installed into practice. There were some minor scuffles in the heat outside on the practice field, but it looked like a team that wanted to face someone else for the first time since November 2019.

“I think the energy is just getting ready for games,” senior defensive lineman Jacob Dudeck said. We’ve been at this for two years now with COVID, and we’ve been beating the heck out of each other and we’re just ready to find someone else in a different colored jersey.”

Camp is also important for the competition for all 22 starting spots, and that shows how far the roster has come since Nystrom took over in 2017 that there’s strong competition at every spot. Dudeck’s a veteran on this team, and he knows every day that his spot isn’t going to be given.

“Every day is a competition day, all of the starters’ jobs aren’t safe, there are always guys that have their days that they have a shot,” Dudeck said. “You have to compete for a spot every day until it’s game time.”

The message has been to “be the best that we can be,” Nystrom said. Heading into a season where nobody played football at the Division II level last fall, there’s a lot of unknowns out there, he added. The season kicks off on Saturday, Sept. 4 when the ‘Cats travel to Lebanon, Illinois to take on the McKendree University Bearcats, but for the time being NMU is focused on themselves, Nystrom said. In year four of his tenure at NMU, and a critical one at that, Nystrom’s team looks to be in a position to fly under the radar and make some noise in the conference.