The power of pointing in ASL

Skillbuilder teaches fingerspelling, the word ‘the’ 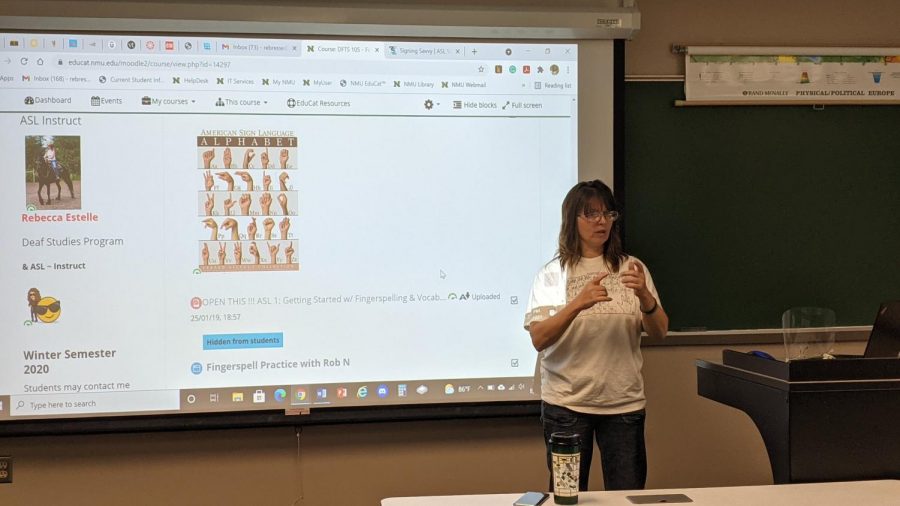 Rebecca Estelle teaches the basic fingerspelling ASL alphabet in her free skillbuilder class. Estelle has been teaching deaf studies at NMU for over 23 years and plans to teach more ASL skillbuilders in the future.

“Don’t point at people, it is rude” is a lesson many were taught by parents and elders growing up. Even the simple act of pointing at objects can feel taboo in public. But as deaf studies instructor Rebecca Estelle taught in her fingerspelling classes this week, pointing in sign language is critical and represents one of the most common words in the English language: the.

Estelle taught four fingerspelling skill builder classes on Aug 19 and Aug 20 in an effort to spread awareness of the fact that anyone can learn sign language. Her classes were one-hour-long sessions in Whitman Hall and were broken into two different sections.

Her first section, Everybody Should Be Doing It, focused on the full and condensed versions of the American Sign Language Alphabet. Estelle encouraged students to spell their own names and introduce themselves to each other using ASL.

“The title should tell a lot about it: everybody should be doing [ASL],” Estelle said. “I want to encourage everybody to be knowledgeable of at least the basics [and] be able to communicate with deaf and hard of hearing people in our world, in our community.”

In her second section, Point Value: Don’t Let Anyone Stop You, Estelle focused mainly on the word ‘the’. To begin, she had each student point at each other for five seconds.

“It is awkward, right? We are getting in each other’s face,” Estelle said. “[Pointing] is not awkward in the deaf world … it is normal.”

In ASL, an object is not only described by its sign, but also by its location and direction. When describing ‘the table,’ the person signing points directly to the table and then makes the motion for ‘table.’

Since ASL relies on visual cues, spatial use and facial expressions become very important. The use of pointing makes it clear which object is being referred to and draws attention to that object.

“Pointing has a lot of value in ASL, the deaf world,” Estelle said. “It is really, really super important. Do not be afraid to point.”

Rose Mouradian, sophomore elementary education major, decided to attend the fingerspelling classes to become more comfortable with ASL and to start her journey on becoming fluent in the language. Mouradian hopes to work with young children in the future and believes it is important to be able to communicate with kids of all abilities.

“I used to tutor a lot of kids with special needs and learning disabilities and then I realized that their school really was not set up for them,” Mouradian said. “I thought as a teacher I could do more to include all types of learners.”

While learning ASL is an important skill that can help more people communicate with those who are hard of hearing, it is different from learning other types of languages.

“[ASL] is a whole body, kinesthetic kind of thing,” Estelle said. “It is very complex where [the word] has gotta go to your ear, brain and then out physically.”

The translation from mind to body movement can be tricky for some people, but Estelle provided many free resources for those looking to build their ASL skills and vocabulary. Free DVDs and books on basic ASL can be checked out at the Lydia M. Olson Library as well.

For Mouradian, the challenge of learning ASL is something that she believes will be worth it in the end.

“I definitely feel like [pointing] is something that is taboo,” Mouradian said. “It is gonna take some time getting comfortable with it, but it is something that maybe should not be taboo if it is used so frequently in other communities.”