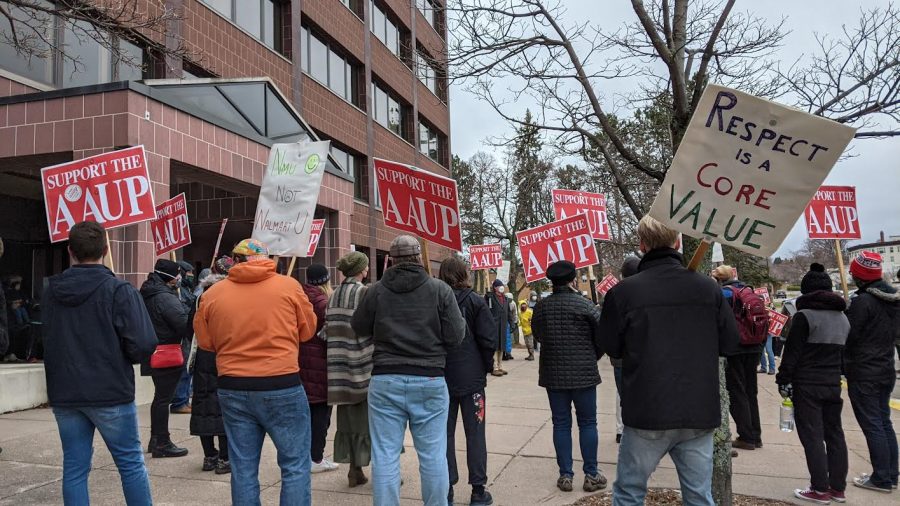 CONTRACT DISPUTE-Faculty protest for the first time this year on April 15, 2021. They have continued to protest, including on April 29. They still do not have a contract.

Northern Michigan University has outstanding faculty who teach college-level courses, produce research results, and serve the community in Marquette and across the Upper Peninsula. Regrettably, the 330 faculty members represented by the American Association of University Professors are currently in a contract dispute with NMU’s administration.

After successfully negotiating a five-year contract in 2015, AAUP members approved a one-year collective bargaining agreement forged during a pandemic in July of 2020. Faculty agreed to a pay freeze and reduced compensation for summer and overload pay because of COVID—to help the university navigate an unprecedented situation. We thought we were being team players.

AAUP members agreed to those temporary concessions to offer aid in an emergency, not to establish a new starting point for negotiations this year in March. While NMU’s administration has, on many occasions, publicly praised faculty for doing excellent work despite the hardships caused by pandemic restrictions, they refuse to get us back on track with the pre-pandemic agreement. Moreover, they refused to extend the contract that expired on June 30, 2021.

Why is the administration not forthcoming with employees about the financial health of the university? If the information about NMU is available to the public, why not share it with the members of the negotiating team instead of withholding that data, forcing union negotiators to go through the Freedom of Information Act to get information about NMU finances?

Why are programs understaffed and underfunded when NMU can spend more than $3 million on salaries for non-union program directors and administrators, predictive analytics, centralized advising and non-instructional program expansions?

Why have union-represented faculty not been offered adequate cost-of-living compensations?

Why are upper administrators making salaries 11-30% above average when compared to equivalent positions at public universities, but faculty members are making salaries that rank second-to-last of those reported in Michigan?

Why set a goal in 2018 to “attract and retain diverse, exemplary faculty and staff” yet not fully fund competitive salaries for positions, especially after cost-saving retirement buyouts?

Why the sharp contrast between NMU administration’s public praise and its private treatment of the faculty?

What we want for AAUP members is salary equity, respect, more transparency and fair and consistent employment practices for all.

NMU faculty are the heart of this university. We should be appropriately compensated, included in decision-making processes, and appreciated for the work we do with students and the community.