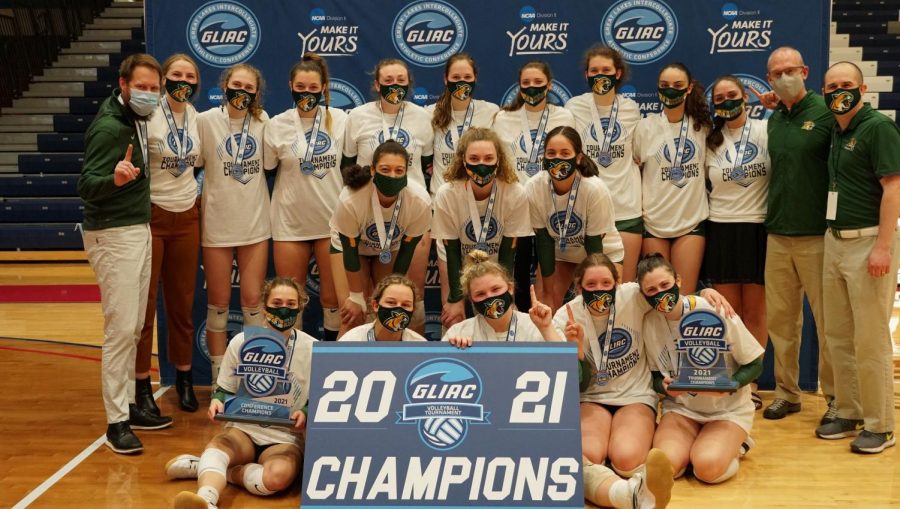 POLLS ARE OUT—The NMU Volleyball team celebrates winning the GLIAC Tournament title after defeating Michigan Tech back in April. Despite this result, and many contributors coming back, the Wildcats are projected to finish behind MTU in the GLIAC North Division Preseason Poll. Photo courtesy of NMU Athletics.

After a historic season that saw the NMU Volleyball team capture the GLIAC Regular Season and Tournament championships in the spring, the Wildcats are ranked second in the North Division in the 2021 GLIAC Preseason Coaches Poll.

Despite sweeping them in the GLIAC Tournament title match, NMU is one point shy of rival Michigan Tech University in the poll. The Huskies are the projected favorites with 51 points (four first-place votes) to the Wildcats’ 50 points (two first-place votes).

Northern returns a lot of key pieces from last year’s championship team and has momentum coming into this season after winning the GLIAC a few months ago. With the season back in the fall like it usually is in a non-pandemic setting, the Wildcats’ title defense begins on Thursday, Sept. 2 in the Keweenaw Volleyball Classic in Houghton with four matches in three days. NMU takes on the likes of Minnesota State University-Mankato, Saint Cloud State University, Concordia University St. Paul and the University of Minnesota-Duluth.