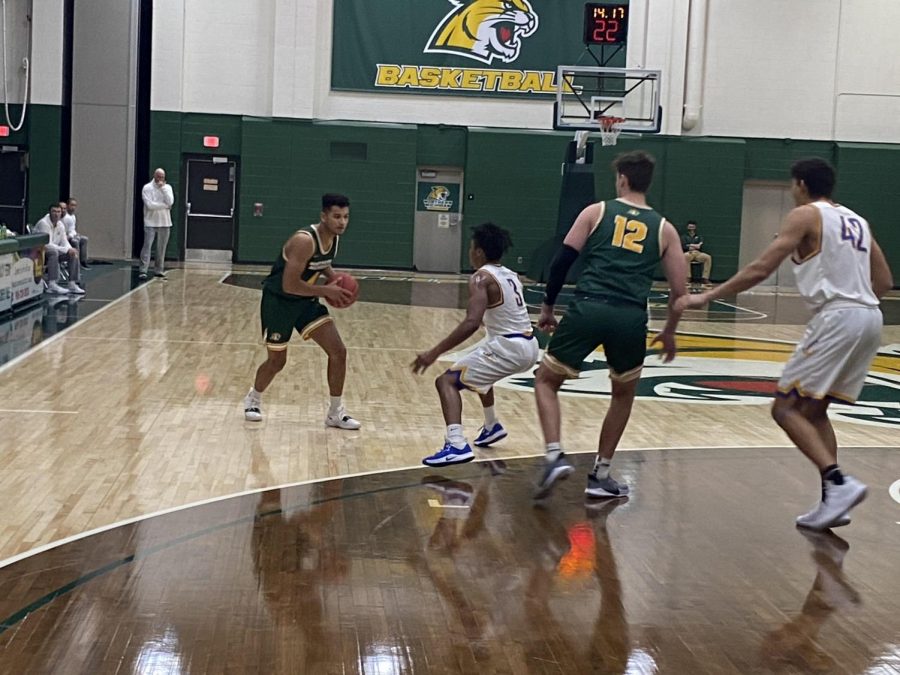 GOING OUT TO CAMP—NMU Men's Basketball hosts an elite camp this weekend. The coaching staff is on the lookout for the newest Wildcat players. Travis Nelson/NW

NMU Basketball is back, but not in the way that one would think. The Men’s Basketball program and Head Coach Matt Majkrzak are hosting an elite camp for high school-aged players tomorrow afternoon.

The camp will consist of a decent-sized group of high schoolers that come from different ages and backgrounds, and are coming to Marquette from several states in the region, Majkrzak said. There are some players coming to the camp that NMU has been involved with on the recruiting trail, and others that are looking to show up and make a name for themselves.

“It’s always exciting to see some kids on campus in our own gym that we’ve seen all summer, and also some kids that we don’t know are trying to come up here and get an opportunity to earn a scholarship or a spot on the team,” Majkrzak said. “We definitely have some guys that we invited that we already have a relationship with, and we’re definitely a little further down the line recruiting them.”

The Wildcats’ coaching staff is on the hunt for kids who are going to be a fit in the program. Skill level is something that can be measured on film, Majkrzak said, but having players in a competitive setting is a chance to see the best out of them in other aspects of the game.

“Person to person, it’s fun to see the guys that are coachable and are tough, and play hard and do all of those little things that we look for,” Majkrzak said. It’s great, it’s great to watch guys compete from different states because a lot of them don’t know each other. You’re used to just competing against the same guys over and over and over again, and one of the nice things about camp is that it brings some guys that have never seen each other.”

This has been the first chance to have a basketball camp since the beginning of the pandemic, and the ‘Cats are looking to get quality players in the upcoming classes into the fold. COVID-19 took away a lot of different things, but the effect of not having camps didn’t go unnoticed.

“I would have to say of everything we haven’t been able to do the last two years, the camp’s probably been one of the biggest just because we’re not able to reach out to the community and area near as much as we’ve wanted to,” Majkrzak said. “It’s nice that we’re able to start that up again and get it rolling.”

Camps like these could’ve been an important tool on the recruiting trail for the 2021 class, but it appears that despite not having them, NMU still came out of it with a group of solid players in Dylan Kuehl, Brian Parzych, Sam Privet, Jackson Dudek and Mike Reed.

“Our incoming freshmen that are here now, we’re really excited. We feel like they’re probably one of the most, if not the most talented group in the entire Midwest,” Majkrzak said. “We got the four highest-ranked kids in Wisconsin in that group, all of them made the state championship game, and we’ve kind of dialed in on our niche of guys that are picking Northern over all of the other Division II’s and some of Division I’s and I think we’ve been able to continue that with these classes coming up.”

Majkrzak wants to start doing camps every year again, including two elite camps, a high school team camp and some more kids camps. With tomorrow’s camp and basketball around the corner, it feels like some normalcy has arrived.