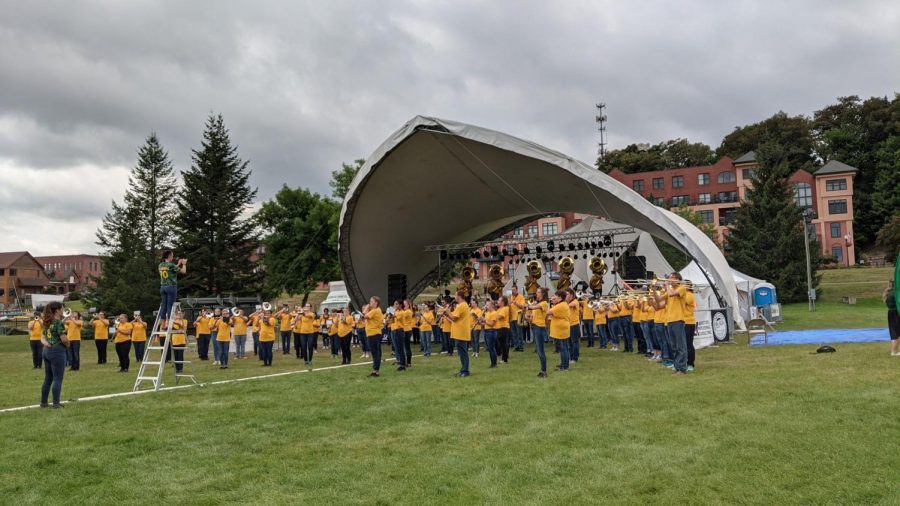 NMU Marching Band performs "Service Salute" at HarborFest in Mattson Lower Harbor on Saturday, Aug. 28. The marching band will be performing many of the same songs such as "Stars and Stripes Forvever" and "New York, New York" for the 20th anniversary of 9/11.

On Aug. 27 and 28, the annual HarborFest hosted by Marquette West Rotary was in full swing to raise grant money for local non-profits. The free event took place in Mattson Lower Harbor and included live performances, a classic car show, food trucks and even inflatable bouncy houses.

HarborFest has been happening since 1984, but this was the first time that the NMU Marching Band was a part of the lineup in recent years.

“Harbor Fest was a really cool opportunity for us to get ourselves out into the community as the NMU Marching Band,” Annika Nelson, senior tenor saxophone player, said. “We want to be a part of Marquette and not just secluded up the hill from the main town area. It was just really cool to be able to immerse ourselves into the community like that.”

The band played songs from their upcoming 9/11 tribute performance including a rendition of “God Bless America,” “New York, New York” and “Service Salute” which was a medley of the songs from different military branches. They also included a selection of pop songs such as “Say Amen,” “Dance Again” and “Brooklyn.”

“I think we did a great job with making the community feel like we all belong together,” Nelson said. “And honestly our dance moves came together really well … we had a really good sound quality and I think that we did a lot of the songs justice.”

Given the limited time the 120 piece band has been playing together, HarborFest was a great time for them to perfect their performance for NMU’s first home game on Sept. 11.

“I think the band made a very good overall impression and sounded great,” Steve Grugin, director of the NMU Marching Band, said. “It was pretty impressive seeing the band in front of the huge performance tent with our ten sousaphones standing on the stage. I was especially pleased with the musicality in the band’s playing given the band had been together less than two weeks.”

The band played on Saturday during the classic car show which featured over 40 vintage cars. There was also local beer and wine from companies like Keweenaw Brewing Company, Oredock Brewing Company and Labatt. Local food trucks came out in support as well and sold pizza, tacos and sandwiches during the afternoon.

In the evening, live music from Marquette, Houghton, Chicago and Detroit took the stage and played everything from classic rock to country. The event ended on Saturday evening with a two hour tribute act to Bon Jovi.

To find out more about the happenings at HarborFest and upcoming Marquette West Rotary events, visit their website.