Men’s Soccer looks to claw to top of GLIAC standings 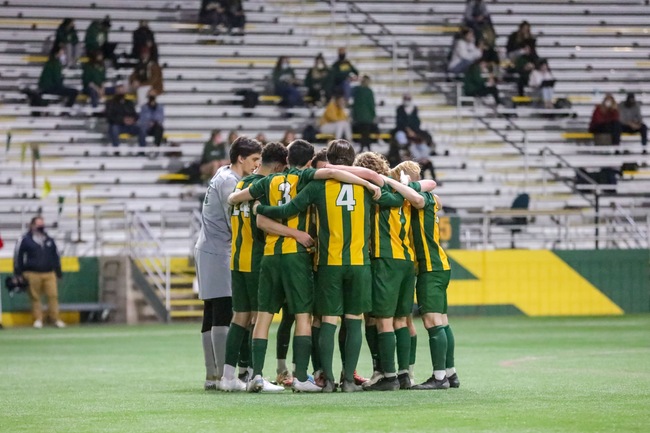 BACK IN ACTION—The NMU Men's Soccer team huddles up together during a game last season. Northern will have its hands full with a loaded GLIAC, but the Wildcats are trying to make history and take home the title. Photo courtesy of NMU Athletics.

It was a historic and chaotic 2020-21 season for the NMU Men’s Soccer team, with a rollercoaster ride of ups and downs. The Wildcats finished 4-3-1 and earned the third seed in the GLIAC Tournament before falling at home in the quarterfinals to Davenport in penalty kicks. That isn’t even mentioning the fact that the ‘Cats played its season in Spring 2021 instead of what was supposed to be Fall 2020 due to the pandemic.

Now with a more normal-looking season in front of the team, Northern brings back a lot of players from last spring. The number is 25 to be exact, and with 13 newcomers, the total of 38 players on the roster is the most they’ve had, Head Coach David Poggi said. Normally 25 is the amount of players teams will have, but the landscape has changed with the extra year of eligibility granted for COVID-19. With the preseason now in the rearview mirror, the Wildcats are heading towards the regular season.

“I think what I’m excited about is that we’ve been able to work with the 25 players that are coming back, and the new ones, but it’s not like we’re starting over,” Poggi said in an NMU Athletics interview on YouTube. “That’s an exciting thing to have as a coach and I think for the players it gives them some real hope of how they can approach the season and with a level of confidence.”

Even with the huge challenge of the pandemic that isn’t yet over, the biggest challenge might be getting the new players accustomed to the program and team with only a short time in the preseason, Poggi said. However, with so much veteran leadership returning and the success of last year’s squad, it has Poggi feeling a little better about that hurdle.

“Starting with the returning players, we had a successful year last year,” Poggi said. “We got a chance to play after just an unbelievably chaotic start and I was even quarantined during a period of time there. It really gave us an identity with that group, they were without for the first time the senior leadership that had graduated the year before.”

Now amongst the leaders is senior midfielder Kaffie Kurz, who finished last season with two goals and one assist. Along with the rest of the team, Kurz feels like it could be a breakout year for the Wildcats after last year’s success.

“We are very optimistic on the season because especially with the GLIAC, we really haven’t had our moment,” Kurz said. “We’ve had good seasons, but not what we think we’re good enough for. This year could be the year that we come and show the entire GLIAC and everybody that we are ready to make a name in soccer.”

This season has a chance to provide that for the ‘Cats if things pan out as they did in the spring. The GLIAC Tournament Championship was between fifth-seeded Ashland sixth-seeded Davenport, which is indicative of how good and wide open the conference is, Poggi said. With St. Cloud State coming in to replace departing league champion Ashland, the complexion has changed a bit. However, the GLIAC looks to be consistent top to bottom, and that’ll be something for the Northern to have its eyes on.

“I think that the conference is going to be even stronger this year, and that’s going to be something that we’ll not necessarily have to be afraid of, but we have to be mindful of with St. Cloud State coming in,” Poggi said. “Just from the experience of all of the other teams in the GLIAC, I think everyone in the conference will be a top team to finish.”

Before worrying about the GLIAC slate, NMU has three non-conference opponents to kick off the 2021 season. Starting with two games this week, the Wildcats will go on the road and battle NAIA Judson University down in Elgin, Illinois on Thursday, Sept. 2 at 3:30 p.m., before returning home on Sunday, Sept. 5 for the home opener against Quincy University at 2 p.m. With chemistry building, a strong nucleus of returners, and coming out of a COVID-19 riddled year, excited to play again hasn’t been higher.

“For me, it means a lot because soccer means a lot to me, and I’m excited to get back out on that pitch and represent my school, my team, my family,” Kurz said. “It means a lot because it’s what I love to do, and having the chance to play again makes me happy. I think with my teammates and coaches, we are all glad to just have the opportunity to do what we love to do.”