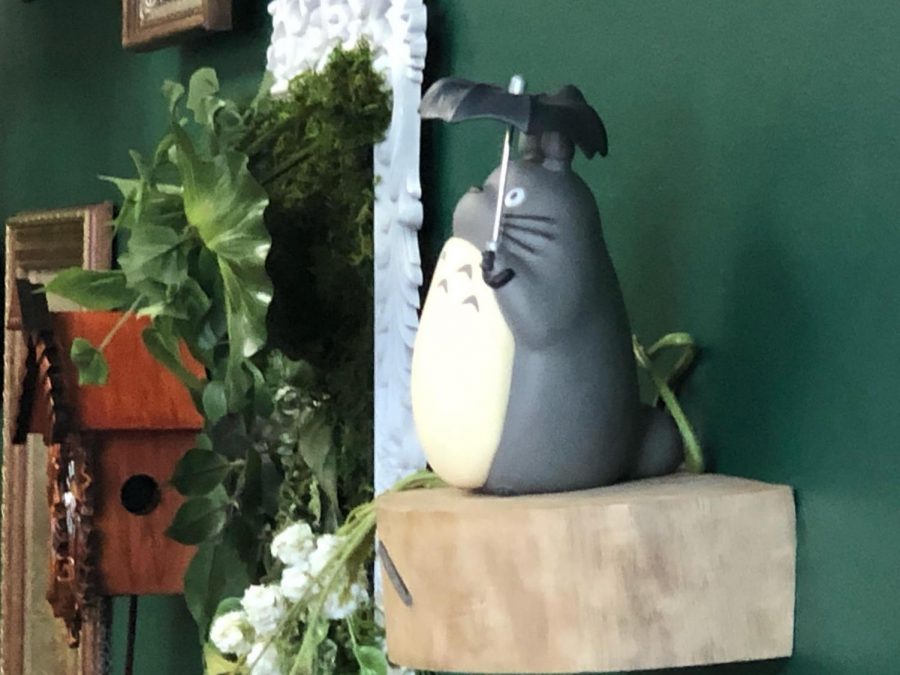 NERD HAVEN-Blossom Bird's decor draws from nerd culture staples such as Studio Ghibli, Lord of the Rings and Pokemon.

I remember hating the honey-rich tea my mom would make for me while I was sick when I was younger. I always found it sickeningly, excessively sweet. Maybe that set me on the path I am on now of not liking tea. Despite that, I walked into Blossom Bird Bubble Tea out of curiosity just a day after it opened last Friday, August 27.

For a little background, bubble tea is a drink originating from Taiwan and consists of two parts–the milk tea, and the boba, the latter of which is a multitude of little brown sugar tapioca balls found in the drink itself. Blossom Bird also offers iced tea and has some other frozen blended beverage varieties, which they called “Winter Snow” drinks, including coffee and hot chocolate.

As all my friends were planning on going, I decided to tag along. What I found was a little shop in Downtown Marquette run by what seemed to be just a few people working tirelessly. A line of tea drinkers stretched out the door. Every time someone left satisfied, it seemed like two more took their place.

Kaila Ball, one of the two owners, explained that the café was an idea started and brought to life by her and her husband Daniel.

“We were only open over the weekend, and for those three days, we did about 300 drinks each day. We initially thought it was only going to be about 100 a day,” Ball said. “We found out pretty quickly [on] opening weekend that we need more help. Thankfully, my family came up for the opening weekend to help. We could have not done it without them.” She also spoke on the possibility of hiring more hands later.

Upon entering, I was greeted with an interesting and, dare I say, relaxing natural atmosphere. Leaves and framed art lined the stone walls. Figurines, framed artwork and other displays of cutesy characters, particularly from Studio Ghibli animated films and the Kirby video game series, filled the shop. There might have even been a robot in there somewhere and a few Pokémon.

“We really wanted it to feel like an enchanted forest,” Ball said. “We are pretty big nerds and wanted our cafe to reflect that. I have always been obsessed with Lord of the Rings and fantasy and wanted to bring that feel to our shop. We do think there is a very big nerd community in Marquette and wanted a place for people with similar interests to feel excited and accepted in our cafe.”

I was a mix of nervous and curious as to what I’d think of the drink, considering my history with tea and all. I selected vanilla milk tea with chocolate boba. I was impressed by the volume of choices on display. Milk tea had the largest selection at about 16, while the other drink types had fewer—though several flavors were shared. Some of the flavors were things like almond, lavender, strawberry and mango, just to name a few. As for the boba itself, they had three types: one that was a simple crystal of brown sugar, a type that would pop with liquid flavored like honey or blueberry when you bite it and a few types that were jelly-filled. You could also get multiple boba flavors for $1 more for each extra scoop to really make your own concoction, making the potential limitless. There is more than likely a drink combination out there for everyone.

The Ball family comes from the Ann Arbor area in downstate Michigan, where there are a number of bubble tea shops, she explained, and when they moved to live up in Marquette since they loved visiting and camping, they found themselves missing the drink and decided to bring the taste to the U.P.

What I tried was undeniably tea. A tea with a strong and extremely sweet and familiar taste. The bubbles that turned out sweeter than I expected were new though. They tasted almost like chocolate-covered cherries, I thought later. Despite the foreign territory for me, I would say that overall I enjoyed it, much to my surprise as well as my friend’s. The mix of the bubbles and the drink itself gave it a very strange texture that was a mix of drinking and chewing, turning into a taste that was refreshing and sweet without being too overbearing. It also helped that it was a cooler drink in the summertime.

For a standard size of the milk or iced tea, it cost $4, and a large was $5, while the Winter Snow drinks were $5 for a regular and $6 for a large. Tables and chairs are also set up around the establishment so that once the customer traffic dies down, it might become a great place for students.

“We envisioned our cafe being a place where people can come relax and hang out with friends and study,” Ball said.

For those out there who avoid tea like the plague, this is one place you might want to consider exploring and seeing if something sticks out at you, as it might just catch you off guard. There’s also a promise of special things not usually on their menu once they figure out the layout for a small kitchen such as French macarons, pastries, mini cheesecakes topped with boba and custom cakes.

“I do love baking and sold at the farmers market this summer,” Ball continued. “I focus on making ‘shaped’ macarons such as anime characters, video game characters, animals and other cute shapes.”

On their website, they say that keeping an eye on their Facebook and Instagram pages is the way to see what they have special on that day.

“I would say that our menu is ever-changing, we plan to add different bubble tea flavors to the menu every month and we are always open to suggestions of what our customers want,” Ball said. “We also just want to thank everyone for the tremendous support we have received, it has been amazing.”