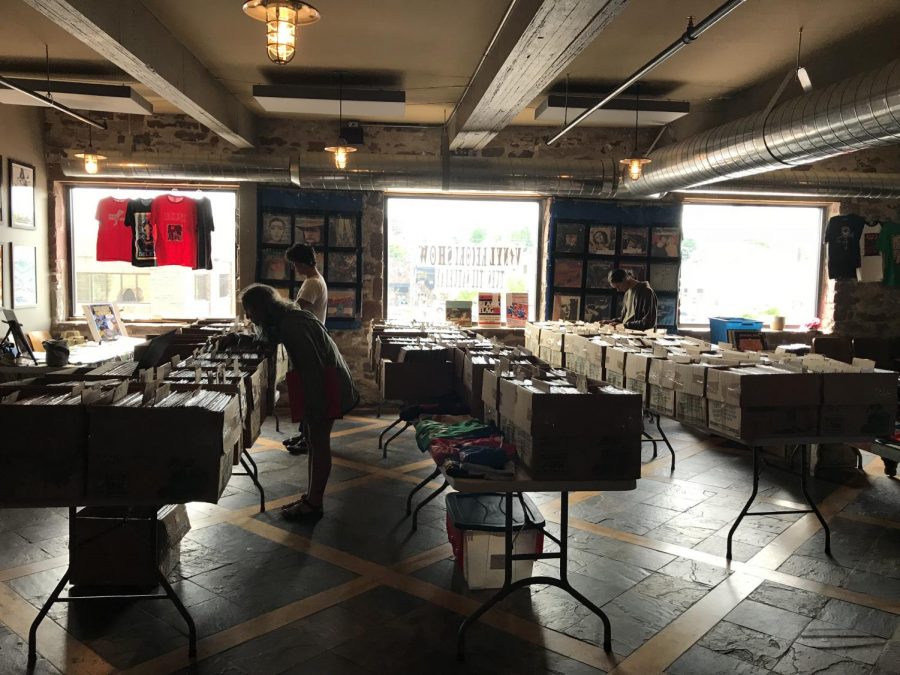 Patrons sift through 1,000s of vinyls in the community room at Ore Dock Brewing Company. This will be the eighth year the Ore Dock Record Show will be hosted downtown to share music with the community.

In March of 2013, Geoff Walker set up three tables of cardboard boxes outside of the newly established Ore Dock Brewing Company and attempted to sell passerby one of the things he loved most: records.

Walker, who has been collecting records since earning his own money working a Mining Journal paper route, was looking to make some extra cash selling his records. He didn’t expect to sell hundreds of his records in only four hours. His pop-up record shop was so popular that Walker teamed up with Jon Teichman, assistant director in NMU admissions office, advisor to NMU’s Vinyl Record Club and fellow record fanatic, to create the Ore Dock Record Show.

Walker and Teichman claim to have everything from ABBA to Zappa, including lots of pop culture artifacts and vintage collectables. Most everything at the show is things that they have accumulated over the years and are looking to share back with the community.

“We always have this giveaway area where we’re like, ‘hey, take a couple of records of easy-listening stuff or classical things, take some records home,’” Teichman said. “We turn a lot of stuff loose and it’s very freeing to do the show, but then also to see people go home happy.”

Collecting vinyls and physical copies of music is a habit Walker and Teichman have continued over the years. They are constantly building and recreating their collections, but this hobby is not just about the music for them.

“I think that it’s great that people can do satellite radio and they can do mp3 and stuff but there is something about inviting people to come over and they look through your records and look through your books,” Teichman said. “It’s not about the material, I think it’s about the sharing.”

Looking through someone’s record collection is almost like a time capsule, Teichman said. A lot of history can be found in one cardboard box of dusty records.

“Recently we connected with someone who we discovered that one of the records in the box that he brought had his father’s high school band on it,” Teichman said. “There is some emotional attachment there … I think recognizing that this is someone’s collection that has some roots in who they are. I think for me what it is really about is the records come in, the records go out and there’s the ones that I love and cherish, but more importantly I think it is the idea of just seeing somebody get so excited and so filled with joy, especially in these times.”

The emotional connection that people find in music is one of the things Walker loves about records and the Ore Dock Record Show.

“There are many times in the Ore Dock Brewing Company Record Shows where people [say] ‘Oh my god, I can’t believe you have this, I lost this in a fire,’ [or] ‘my grandparents had this when I was four’ … You can see people sometimes at the edge of tears, their hair stands up, they spontaneously hug us and say ‘thank you so much for bringing this to me. I didn’t even know that I was looking for it, but here it is,’” Walker said. “Suddenly they are transported to another time within themselves. So it is not just finding out about things externally, it is about connecting with and solidifying the internal personality too. Music is the best.”

Besides records and other collectables, the Ore Dock Brewing Company will have live music, food trucks and drinks available for patrons as well. To find out more about the record show, check out their Facebook page.

“It’s something that really binds the community together in the sense that we have everybody from grandparents and senior citizens to newborn babies,” Walker said. “To see that huge demographic of ages and genders and backgrounds, it really makes me happy to see that everybody feels comfortable and included in what we are doing.”