What they said: NMU coaches take podium for first time in fall season 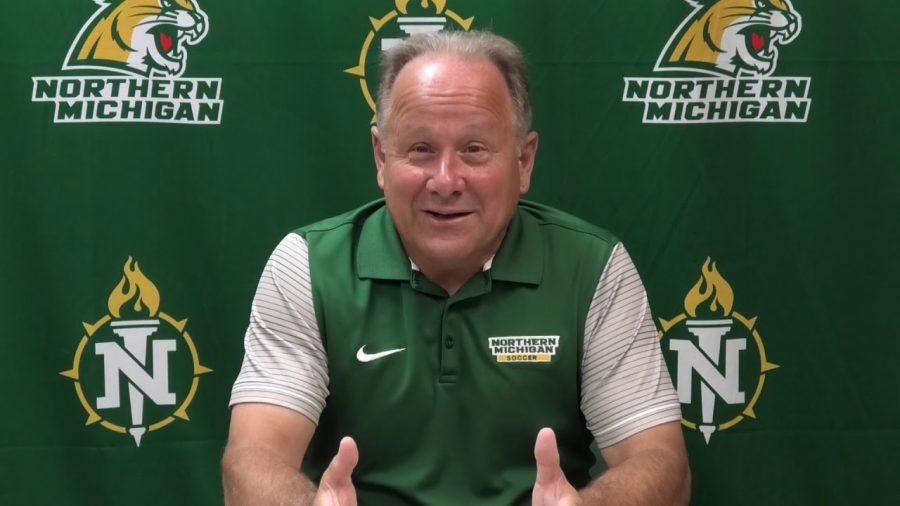 NMU Athletics held its first press conference of the season this past Tuesday afternoon inside of the Izzo-Mariucci Video Room. Five fall sports coaches answered questions as all five represented teams will begin competition in the following week.

First up at the podium was NMU Football Head Coach Kyle Nystrom, and he spoke about the team’s opening game on the road against McKendree University on Saturday, Sept. 4. The team had a COVID-19 pause from practice for a week from Aug. 20-26, and have a ramped-up week of practice this week to try and get ready, Nystrom said. Nystrom is a guy that likes to be prepared at all facets, but this situation has been anything except organized.

“It’s way out of the ordinary from what I’ve ever been through in my coaching career, but you know what? It’s a great opportunity, it’s a little more scattered than I like,” Nystrom said. “I don’t like not being completely compared, every T crossed, every I dotted, I don’t like being out of that realm. But with this situation, you don’t get to function any other way, you have to roll with the punches.”

The Wildcats also haven’t played a game since November 2019, and neither has anybody else on its schedule. It’s a guessing game of what McKendree is going to come out within the season opener, but the coaching staff is trying its best to figure that out.

“Coach [Mike] Babcock to me always loves 11 personnel, he’s the head coach, he runs the offense. So going on what I know about him, I expect him to be in 11 personnel and do the things that he likes to do that he’s shown us in the past. But at the same time, he might not have as many people as he likes still at positions and he may change. And if that happens, we change how we line and everything we do is to be able to adjust. I don’t know what they’re going to do for sure. I know what Mike likes to do, but whether he’s going to do it, I can’t put a paycheck on that.”

Last season was a successful one for NMU Men’s Soccer, and Head Coach David Poggi thinks the team’s talent is going to be there again this year. The ‘Cats return 25 players from last year’s squad, and the challenge for this fall’s team won’t be acquiring a talented roster.

Just when it looked like a season wasn’t happening last year, it did. The team played nine games in the spring including the GLIAC Tournament and finished as the third seed in the regular season. There were positive and negative takeaways from that time, but Poggi was glad that some guys got the experience of the conference competition.

“It was really helpful to be able to get, even though it was an abbreviated season, to get their chops in a little bit so they become familiar with some of the teams in the conference, and what the travel’s like,” Poggi said. “It was only one match a weekend, we’re now into the traditional season and it’s a two-match weekend all the way through with one or two exceptions. That’s a little different, getting ready for a match and then preparing for the next one within 24 hours is a little bit crazy.”

Speaking of successful soccer seasons, the NMU Women’s team made it all the way to the GLIAC Tournament Championship last season, a first in program history. Second year head coach Jon Sandoval is excited for the team’s two season-opening home games against St. Cloud State University on Thursday, Sept. 2, and the University of Minnesota-Duluth on Saturday, Sept. 4. The home games are crucial to a team’s success, so besides two victories, Sandoval is looking for other things in these two match-ups.

“We’re looking for improvement and just implementation of the things that we’ve kind of introduced over the last two weeks,” Sandoval said. “I think it’s going to be important to have a good start because when you win the home games, it makes the road a little bit less pressure and a little bit less emphasis on getting those results. So you’ve got to definitely take care of the ones at home first. We’re definitely looking forward to playing some good soccer and hopefully get two really good results against some two really good teams as well.”

Now in just his second season leading the program in the span of five months, things have been accelerated, unlike any other coaching hire. Last season isn’t going to determine the program’s culture, but Sandoval is hopeful that another successful season in the fall will bring the ‘Cats well on their way to finding it.

“Yeah it’s about, we set these expectations and we set the program culture last year,” Sandoval said. “Now it’s about maintaining those expectations and culture. I mentioned this previously but you don’t change an entire program within 9-11 games in one spring season, it takes, of course, a couple of years and it takes a couple of successful years.”

NMU Volleyball comes off a spring season that saw the ‘Cats sweep the GLIAC Championships (regular season and tournament). The team has a lot of momentum coming off of last year but will be tested early against four solid teams at the Keweenaw Classic in Houghton from Sept. 2-4. All four teams are either nationally ranked or receiving votes in the polls, but NMU is also receiving votes heading into the fall. For Head Coach Mike Lozier, it’s going to have to be a balancing act between hyping up the team and making sure they know how much better they need to get this year.

“You want to build them up and help them understand how good they are, but also help them understand that we have work to do,” Lozier said. “If we truly want to compete for a national championship or at least be in the discussion, the team we are right now is not the team that we need to be in October or November.”

In the team’s four matches this upcoming weekend in the long race towards the end of the season, Lozier just wants the team to get better each match and take it with them throughout this journey. A team with a lot of expectations, Northern will have the chance to deliver up in Houghton.

“I’d like to see growth as a team,” Lozier said. “One of the hardest things about being a fall sport is that you only get two weeks really to practice together before you have to compete. In a sport that requires so much trust on the floor between six people, what you really need to see is that connections between setters and hitters are good, that our defensive system is being executed the way it needs to be executed, and if we do those things at a high level, we should win. I’m not saying we’re going to win them all, but we should at least compete with the best teams in the country.”

It’s safe to say after NMU Cross Country Head Coach Jenny Ryan talked to the media, that this year’s team has high aspirations. It’s not pressure because the runners have put in the work and will continue to improve their times just based on the long season, Ryan said. From each runner, the potential seems to be there for this team to be able to gel together.

“For me, looking at the team I have and knowing the work that they’ve put in and just the workouts already, I can see that this team is going to be strong,” Ryan said. “It’s going to be as strong as those teams when I went to nationals some years back three years in a row. So we’re really excited, and I’m really excited because I think it’s definitely one of the best teams that we could ever have.”

To get to where the ‘Cats want to be, however, like all other sports, they’ll have to navigate the long road that a season brings. From race to race, Ryan said that the team is trying to get that much better.

“We don’t want to be our fastest right now, it is a long season and with running, you get faster throughout the season,” Ryan said. “So just keep working on what we’re working on, and every race we’re going to get faster. We have different terrains and we work on pacing, kind of how we go out, how we race during the race, how we race in a pack, how we work together. Each race we’ll take what we learned from that race and then move on to the next one and as we go through the season. We’re working on the kind of speed and faster pacing so that by the time we get to the conference and the regional championships, we’ll be at our best.”

With press conferences back, fall sports are starting to get into full swing at NMU.