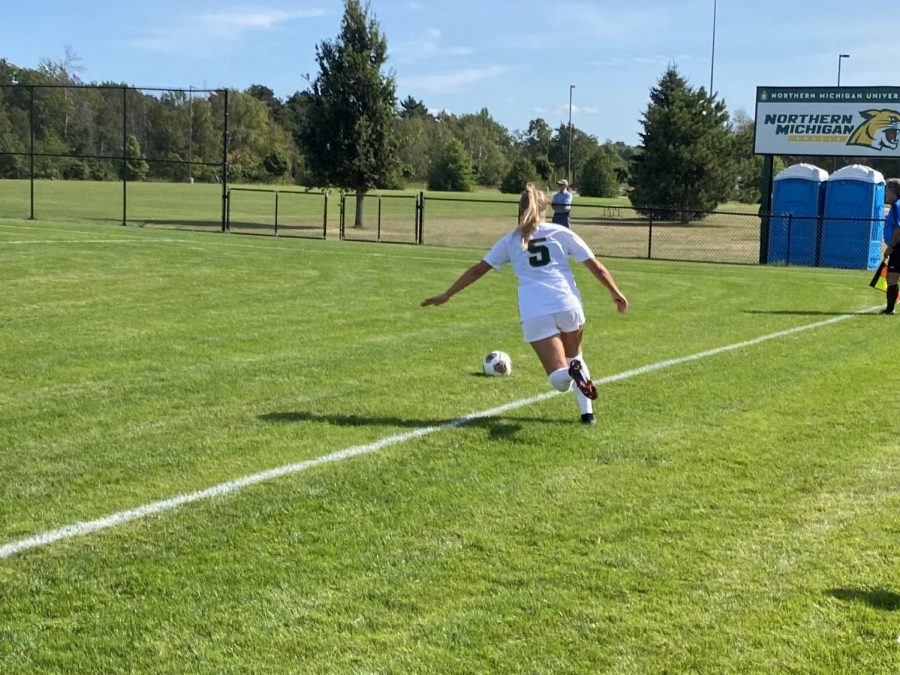 The NMU Women’s Soccer team started off its season with a 3-0 victory on its home field over St. Cloud State University in the season opener on Thursday afternoon.

Northern (1-0) got to a lightning-fast start with a strike from sophomore midfielder Brooke Pietila in the fourth minute. Getting off to an early one-goal lead, the ‘Cats didn’t look back against the Huskies. NMU didn’t play complacent as teams do at times with leads, they played aggressively and took 15 shots in the first half, seven on goal. The Wildcats converted on one more of those in the late stages, as freshman forward Ashley Koch scored her first career goal on a breakaway off the assist from sophomore forward Alexa DeKam to give NMU a 2-0 lead heading into halftime.

“It was kind of unreal to get my first college goal, but the pass came from Lexi [DeKam] and I couldn’t have done it without her,” Koch said. “It was exciting for my first ever home game, so it was fun to get out there and I think the team played really well.”

Neither team had a lot going in the second half, but NMU wasn’t giving in to any SCSU attacks. The ‘Cats maintained their first half aggressiveness and added three more shots on goal in the second frame. The third and final one resulted in a Wildcat goal from senior midfielder Caroline Halonen with 34 seconds left in the match off of a corner kick for the exclamation mark. The play came off a deflection, and Pietila was credited for the assist.

“It’s an all-around great effort, and you’re talking about individuals across the board who battled for 90 minutes no matter what because once you get a scoreline to two or three [goals], it can be easy to shut off,” Head Coach Jon Sandoval said. “That just speaks to their mental fortitude of being able to stay locked in and stay focused.”

Head Coach Jon Sandoval couldn’t have been more proud of the team with a beaming smile after the game. Not only did the Wildcats pick up their first win of the year, but it was also the first game played on that field since 2019.

“I couldn’t be more pleased with the energy and the execution to secure this game,” Sandoval said. “I think this is an accumulation of a lot of hard work over the past few weeks and I just really couldn’t be happier for the group of players that we have here and just how spectacular it is to start off the opening day after not playing on this field for the last year and a half or so. It’s a great feeling, I’m happy with everything today.”

Northern came off of an exhibition last weekend against the University of Wisconsin-Green Bay, and after forcing a draw against a Division I opponent, the hope for this opening match against SCSU was to adjust things that went wrong. It appears that the team passed the test.

“Absolutely, we talked about implantation and execution all week,” Sandoval said. “We were looking at the film from Green Bay [UWGB] and going over those things and trying to take what we didn’t do well against Green Bay [UWGB] and execute it in today’s match, and I thought they 100% did in every area of the field.”

Despite having senior leadership in key spots all across the roster, it says something about the ‘Cats that two of the three goals came from underclassmen. What it says is the culture that Sandoval mentioned building in the press conference on Tuesday is in the making. Pietila and Koch’s goals speak to the team’s depth and leadership, Sandoval said.

“I’ve spoken on this quite a bit, but it’s a self-reliant program that is player run and driven,” Sandoval said. “The leadership from the veterans is helping out the younger players quicker and faster, and you see that translate into now the matches, [I’m] so happy.”