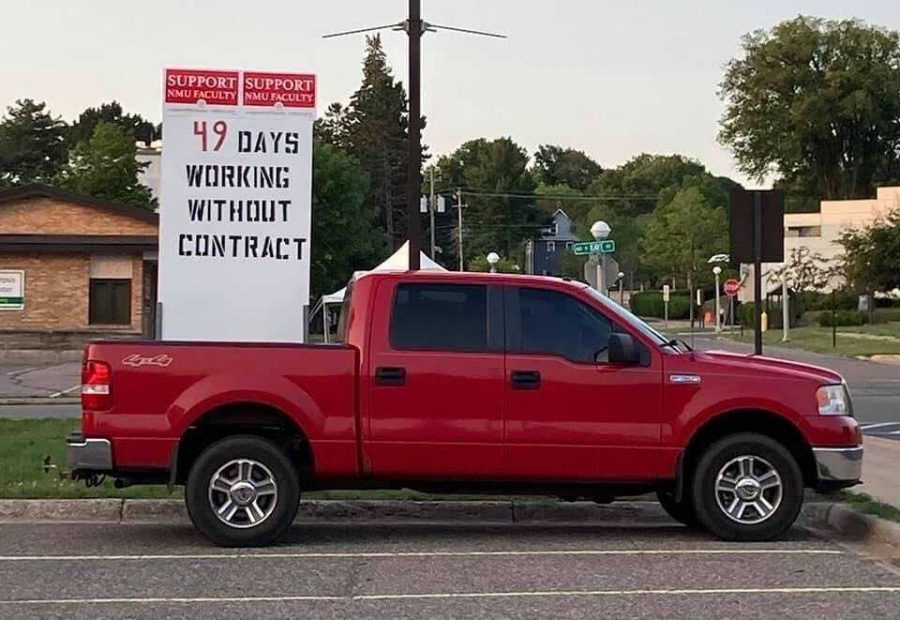 Photo courtesy of Dwight Brady TAKING A VOTE—With contract negotiation mediations entering its second month, NMU-AAUP now are holding a strike authorization vote to decide whether or not they are able to go on strike.

NMU-AAUP met Thursday evening to discuss the possibility of going on strike. The strike authorization vote was the topic of discussion during the regularly scheduled meeting as part of the ongoing contract negotiation mediation.

The strike authorization vote was not to decide whether the faculty will go on strike or not but give faculty the choice in the future if they wish to. Dwight Brady, union president and multimedia journalism professor, said that faculty cannot be dismissed for engaging in a strike for unfair labor practices but run that risk when striking for economic reasons.

In the most recent article on NMU-AAUP’s webpage addressing President Erickson’s clarification email on public statements about contract negotiations, AAUP addressed several actions that have been made during the mediation process that according to AAUP falls under unfair labor practices.

Erickson said that the administration made a contract extension offer to AAUP union leadership in early August and did not receive a response. According to AAUP, the negotiation team never received an offer.

Brady said that going on strike is not something they wish to do but are exploring as an option after the Oakland University faculty union went on strike for unfair labor practices.

“We are not trying to be like them or anything but just provided some information that made it a little more clear as to how this might all play out,” Brady said.

Brady said stating that nobody will win in a strike situation. Faculty would lose pay, students will lose time in the classroom and overall not be good for the university.
“But at the end of the day, we are the faculty union. We represent the faculty and if their wish is to move forward with something like this of course the executive committee of the union invests their desire to move forward,” Brady said. “You know we will eventually wind up going forward with a job action. But again, that’s way down the road.”
The meeting began with almost an hour spent discussing the latest contract offer from the administration. Brady stated that he felt the meeting was productive with union members leaving the meeting still in conversation. Robby Goodrich, a member of NMU-AAUP and history professor, said that he remains optimistic about the outcome of contract negotiations.

“I think they want the best possible outcomes for everyone but I think what they need to do is to hear just how far we have been pushed to take this unprecedented step,” Goodrich said.

The next steps for AAUP are to keep negotiating and the students in mind. Gabe Logan, AAUP contract officer and history professor, hopes that moving forward the administration is serious as faculty is about the education of students.

Logan said stating he was most frustrated about mediations due to the time it has taken for them to negotiate. Logan said that everyone has jobs to do and it is not getting done until the contract is closed.

Union members have until the end of the day on Friday to cast their ballots on their thoughts on the strike authorization with results expecting to come as early as Saturday.