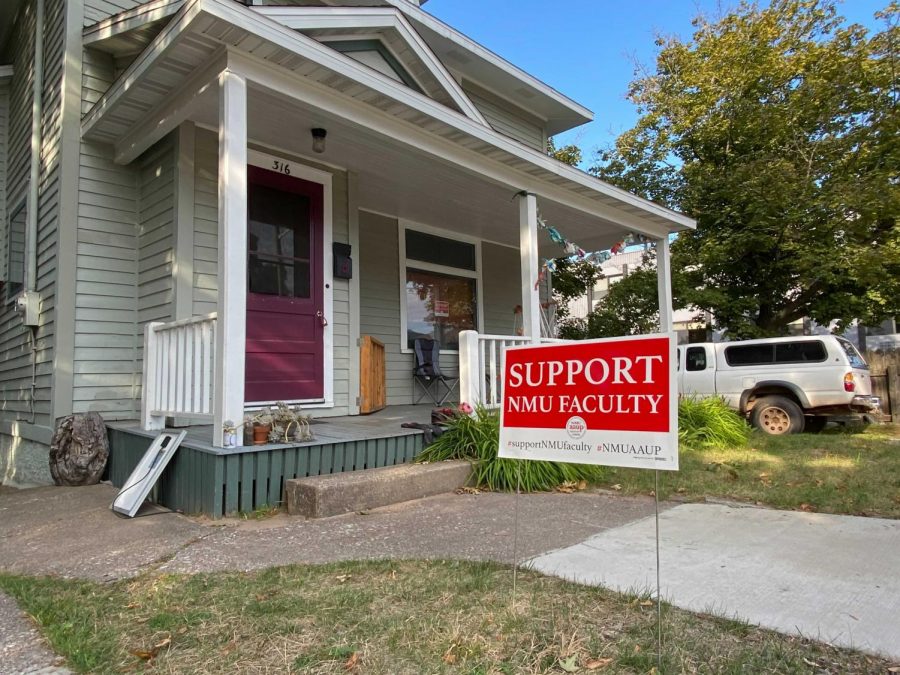 SHOWING SUPPORT—Most years students can see greens and golds fill the city of Marquette, to display their NMU support. This year, students saw the town flood with red as signs saying 'support NMU faculty' were displayed in windows, front yards and even in their cars.

Northern Michigan University faculty have now reached a tentative agreement with the administration on a new five-year contract. The announcement was made Saturday evening through an email sent by President Fritz Erickson.

“We are pleased to have reached a tentative agreement,” Erickson said. “This contract provides both financial and academic support for our faculty and ultimately for our students.”

Faculty had been working two months prior with no contract. Since July 19, 2021, the faculty union and administration have been negotiating terms for a new contract.

Erickson wrote in his email that more details of the contract in terms of benefits, personnel policies and academic administration functions will come in the future.

“This agreement obviously took longer than both sides have preferred, but it does show the principles of collective bargaining and free speech are still alive and well at Northern Michigan University,” Dwight Brady, union president, said. “Finally, I want to thank the members of our negotiating team as well as the administration’s team for all the hard work and extra hours they committed to this process.”

NMU community members, both students and non-students, have shown faculty their support since the start of the school year. When driving through Marquette, red ‘support NMU faculty’ signs can be seen in yards, windows and even in car windows.

“NMU will forever be a beautiful school in a beautiful location, however, I do wish to see more work done by the president in ensuring a bright education for us,” Ford said. “I’m sure teachers will be more enthused about teaching, so that makes me happy to see.”

Ford said that they hope in the future NMU will handle contract negotiations sooner and that the faculty are being treated fairly.

Last week, the American Association of University Professors held a strike authorization vote to decide whether faculty would have the choice to call a strike in the future. This option was brought to the latest AAUP meeting after Oakland University faculty went on strike for unfair labor practices.

Brady said at the time of the vote that nobody will win in a strike situation. Faculty would lose pay, students will lose time in the classroom and overall not be good for the university.

“But at the end of the day, we are the faculty union. We represent the faculty and if their wish is to move forward with something like this of course the executive committee of the union invests their desire to move forward,” Brady said. “You know we will eventually wind up going forward with a job action. But again, that’s way down the road.”

On Saturday, AAUP members were overwhelmingly in favor of authorizing the union to call a strike if necessary, with a vote of 183 for it and 35 against. Just hours later, Erickson’s email was sent out to the NMU community announcing the tentative agreement between faculty and the administration.

“I’m glad that the stalemate was broken before it started to seriously hinder the education of the students here,” Will Mengyan, senior economics major, said. “I’m also glad that I’ve stayed informed throughout the saga; It’s taught me a lot about the logistics of the professional academic world and how important it is to be receptive to the voices of employees in a professional setting.”

Caden Meines, junior multimedia production major, said that the contract is a good start but can still be improved upon.

“I feel the school should have planned better and realized the contracts were about to expire and should have been working with teachers to negotiate new ones,” Meines said.

For the future, Mengyan said that NMU needs to prioritize the treatment of the people integral to the education of their students. Mengyan said that consistent contract issues would undoubtedly discourage prospective educators from teaching at NMU and would drive the finest educators to seek out better opportunities elsewhere.

“If NMU’s rate of pay isn’t at the very least competitive with other institutions, the quality of this school’s programs will promptly flounder,” Mengyan said.

Mengyan said that he wants to express his gratitude for, admiration of and solidarity with all of the faculty members who played a part in advocating for themselves and NMU.

“This agreement wouldn’t have been possible without their dedication, and I thank them for their tireless efforts to make this school the best it can be for students and professors alike,” Mengyan said.

Mengyan said that he is relieved that there was a tentative agreement made between the administration and faculty.

“I think the fact that this agreement was reached immediately following the threat of a strike is a testament to not only the effectiveness of collective bargaining but its necessity in employer/employee relations,” Mengyan said.

Mengyan said that he is happy the contract mediation is over with but is embarrassed and disappointed by the fact that faculty went without a contract for over two months.

“I’m optimistic that this agreement will allow us as an institution to move forward and hopefully set precedents to avoid incidents like this in the future,” Mengyan said.