Bands behind the Blues Fest 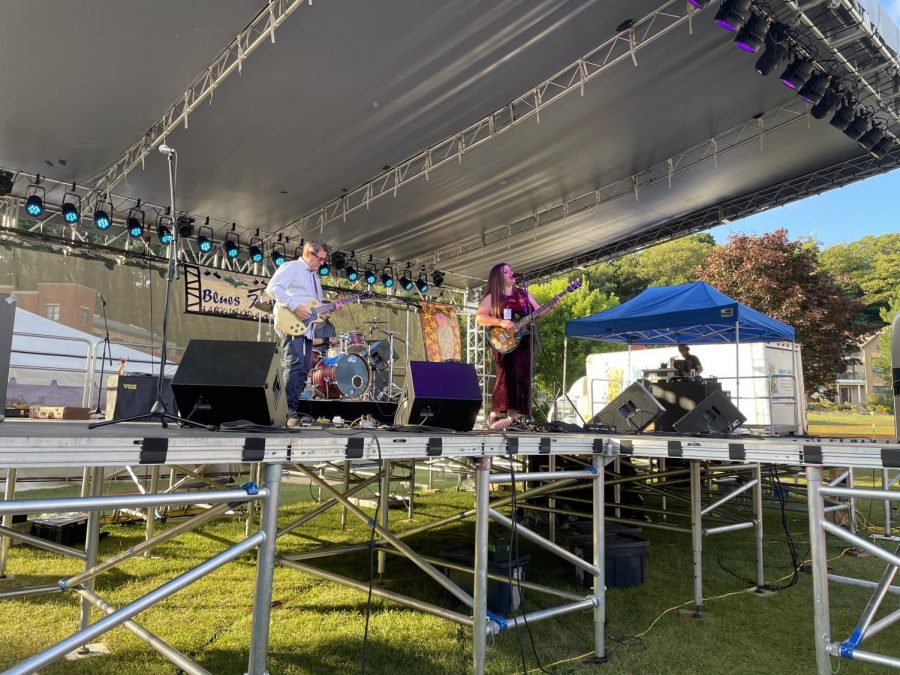 BABY BLUES - Amanda Fish performs at Blues Fest with guitarist guitarist Mike Letts from “Mike Letts and the Marquettes.” Music is now Fish's full time job on top of being a new mother to her son.

The Marquette Area Blues Fest took place over Labor Day weekend and featured a great collection of artists, both locally and nationally.

The stage was set up in Mattson Lower Harbor Park with ample seating for blues-lovers and a dance floor for those who could not keep still while listening to the bands.

One such band was Under the Radar, a group of Marquette locals who started off the festivities Saturday afternoon. The band consists of vocalist and guitarist Dale Carrier, drummer Dave Aho, keyboardist Warren Hantz and bassist Joel Rabine.

Carrier writes all original songs for the band saying, “songwriting is kind of weird because sometimes you’re just messing around and you come up with a melody … and you start adding words to it. Then there are other songs where the words come first and then you have to think of what you want the song to sound like.” He writes about his own real-life experiences. “Some of it is serious, and some of it isn’t fun,” Carrier said.

Under the Radar considers their original music as a mixture of blues, rock, country, R&B and soul.

“When I say country, I don’t mean your stereotypical country music,” Carrier said. “I think the difference between what we do in a song that may be more on the folk-side or country-side is that we still have that blues influence because the melody lines and phrases have more of a blues scale and blues licks.”

When he is writing he does not want his songs to sound cliché, so he says he adds his own personality.

When Carrier was 19, he met the other members of his band who introduced him to producing music. He has now been playing for over 40 years. As soon as he learned the first chords on his guitar, he was writing songs and the other band members help to bring his musical vision to fruition.

Carrier said that Under the Radar has a good band dynamic. He noted that other bands tend to have a lot of drama, “but with us, we all get along great. We are easygoing so it’s good.” On stage, he said they get up there and put everything they’ve got into the performance.

Blues Fest provided the space for them to be able to do just that.

“That was the greatest gig ever,” Carrier said. “The rain, it just quit. I made the joke that the reason the rain went away was because we’re under the radar.”

When Carrier is not on stage with guitar in hand, he is a contractor, but Under the Radar rehearses at least once a week for three hours. They are currently working on recording an album.

Another performer at Blues Fest was Amanda Fish, most recently from St. Louis, Missouri. Fish is the vocalist, guitarist and bassist in her band, with Glen James on the drums.

“We kind of pick up guitar players wherever we go, or we do it as a duo,” Fish said.

Before creating her band, Fish was working in security and would play her ukulele on the job. When they told her she could no longer play her instrument, she put her two weeks in.

“I want to play my ukulele more than I want to work security,” Fish said.

Fish writes all of her own songs. She said her writing process is “making myself do it by hook or by crook.” Sometimes it will begin with a lyric and other times with a melody. “I will literally use any technique I can to make it happen … It takes discipline.”

James joined Fish’s band in 2018, replacing local, temporary players she recruited from her city. They began to get gigs outside of her hometown and were soon touring around the country. Performing is now Fish’s full-time career, as well as being a new mother to her baby boy.

In regards to performing, Fish said, “I didn’t want to exist in any other capacity in the world. I can wait tables … but that’s not me at my happiest. I know where my joy is.”

She said that the Marquette Blues Fest was the highlight of their entire tour—specifically because they were out of the Southern heat. Amanda Fish was also fortunate enough to have guitarist Mike Letts from Mike Letts and the Marquette’s step in and perform with them.

Mike Letts and the Marquette’s started off the festival on Friday night—this is no longer an active band, but all members agreed to get together one more time to jam at Blues Fest. Mike Letts is the vocalist and guitarist, Mike’s son, Jon Letts, is the bassist, Jim Cohen is the drummer and Travis Swanson is their other guitarist.

The band began about ten years ago. Swanson and Jon had both been a part of separate bands in high school, and Mike would sit in on the different rehearsals, thinking to himself that he would like to start a band with his son. Mike said, “I’m not a bandleader, and I don’t sing enough,” and that was when Swanson stepped in to share the role of singing. “So that’s how it started,” Mike said.

While they are no longer actively playing together, they still have a great relationship. “We get along so well,” Mike said. “They’re all such accomplished musicians … It’s never been one of those bands that ever had any conflict.” He stated that they had no prior rehearsal to Blues Fest. “I made a setlist, and it was like riding a bicycle.”

Their setlist consisted of all covers of old blues songs.

“When people think of the blues they think of blues-rock or Eric Clapton … We don’t do that,” Mike said. “We do the original blues, like from the 50s.” He said their style comes from African American music tradition in the United States.

When Mike is not playing his guitar in the middle of the night or with his early morning coffee, he teaches art education at NMU. “That’s my main thing, and I’m a painter. I did the banners for the stage.”

In regards to stepping in for Amanda Fish, Mike said, “We’re like a big family when you’re in the blues. It’s like a vocabulary that everybody knows.” Playing the blues helps to bring him back to the present moment. “It’s almost meditative.”