What they said: what’s to come this weekend for NMU athletics 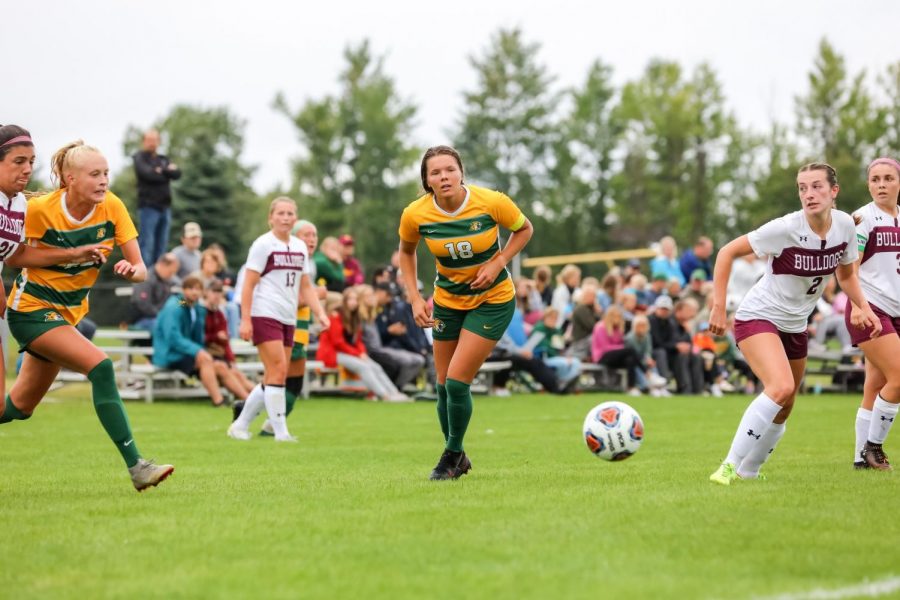 CHATTIN' IT UP—NMU Women's Soccer senior midfielder Caroline Halonen controls the ball during the Wildcats' 5-1 win over Minnesota-Duluth on Saturday. NMU's head coaches took the podium for their weekly press conference this past Tuesday. Photo courtesy of NMU Athletics.

Week two of the NMU Athletics press conferences has come and gone for the Wildcat coaches, and the teams are heading into a second weekend of competition.

Northern Football got its first victory in nearly two years this past Saturday, going on the road to get a 27-20 win over McKendree University. Coincidentally, the Bearcats were the last team that NMU had beaten back in September 2019.

The Wildcats will return home at 1 p.m. on Saturday, Sept. 11 at 1 p.m. against Division III University of Wisconsin-Oshkosh. The Titans also enter Saturday’s match-up 1-0, and are ranked 11th nationally in d3football.com’s Division III poll. Despite being an entire division below NMU, Wildcats Head Coach Kyle Nystrom expects a war of a game and considers it important for recruiting in Wisconsin.

NMU Men’s Soccer began its season this past weekend with an 0-1-1 record after tying with Judson University 1-1 on Thursday and falling at home 1-0 to Quincy University on Sunday.

In the latter match, the ‘Cats were only able to get one shot on goal, and had to finish it out shorthanded after sophomore defender Pier Cucciati received a red card. Quincy took advantage directly from the penalty with the only goal of the game from a penalty kick. Having only one shot on goal was a topic at the press conference, and Head Coach David Poggi is hoping that his team is going to improve in that area moving forward.

“I’m disappointed that we didn’t get more shots on frame and really test their [Quincy’s] goalkeeper, and that’s something that we’ve just got to continue to work on,” Poggi said. “I think we’ve got a couple of players coming back into the lineup now, and I think that’ll make some changes. Is it still too late for that game? Yeah. Is it too early for them to show this weekend? Maybe. But I think it’ll give us an opportunity to see if we’re really going to be able to make this run.”

It was a successful start to the season with two home wins for the NMU Women’s Soccer team. The ‘Cats defeated St. Cloud State University 3-0 on Thursday in the season opener, and capped off the weekend on Saturday by knocking off University of Minnesota-Duluth 5-1.

Although the average of four goals per game won’t last, it is explanatory of the firepower that Head Coach Jon Sandoval’s team has. Heading into the second weekend of the season — this time a road trip to Minnesota — the Wildcats are trying to keep the scoring train rolling. The pair of games starts off at 6 p.m. on Friday night against Winona State University, a program that NMU has never beaten (0-7-0). Before heading back home, the ‘Cats continue the road trip for one more match at 2 p.m. on Sunday against Bemidji State University. It’ll be a lot of time away from home, and that’s where Sandoval’s point of getting off to a fast start like they have in the first two wins comes into play.

“I think it’s going to be not starting off flat, not starting off slow,” Sandoval said. “I’ve mentioned to the group a lot that in the first 10 minutes a lot of goals are scored there, and we’re one of those teams that can testify to that. The first 10 minutes are very critical, so if you don’t start off hungry, you start off flat, you can easily concede. Winona is a team that is very well prepared on set pieces, they’re very methodical about the way they approach things, and we’re hoping that we can stay in tune and be switched on when those moments happen in the first 10.”

It’s still early in the fall season, but as games start up again, the more there is to be found out about NMU’s teams. With another weekend under their belts, there’ll be that much more to know.