NMU Women’s Hockey returns to ice after long time away 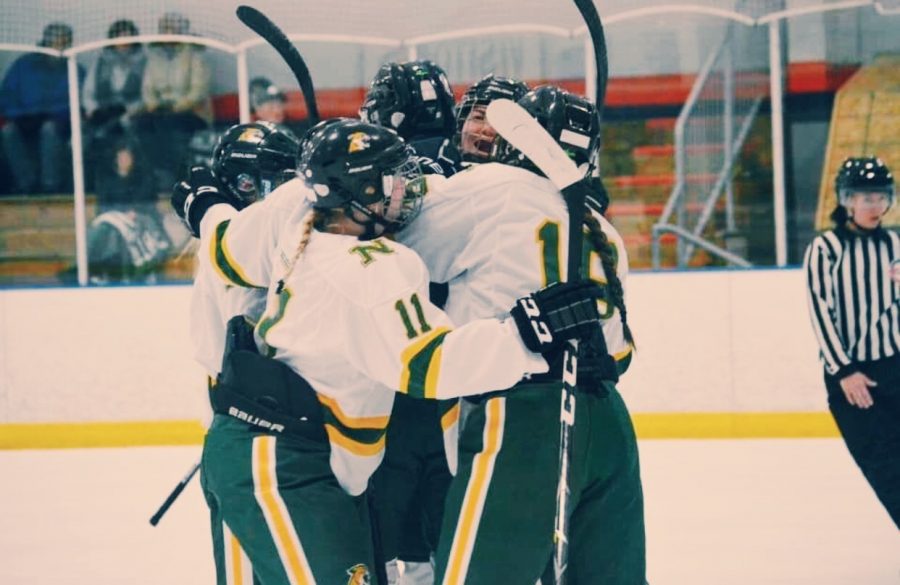 NICE TO BE BACK ON THE ICE—The NMU Women's Hockey team celebrates on the ice in a previous season. Now with the 2021-22 season set to begin, the Wildcats look to celebrate more. Photo courtesy of Faith Delgado.

The NMU Women’s Hockey team is getting ready to start its season this fall for the first time since the 2019-20 season, and are ready to get back on the ice.

The Cats’ open up the year at 4 p.m. on Saturday, Sept. 18 at home against Lake Superior State University. Facing COVID restrictions, the hockey team was cut off from nationals in early 2020 and then were forced into a dry season with no games or scrimmages during last year’s semester. They hope that despite their lack of game time, they can get back out there and show their dominance on the ice.

“We are hoping for another great season as our 2019-2020 season leads us to nationals, but unfortunately, we could not make it there because COVID started to heat up and last season we were not allowed to play any games,” junior Vice President Faith Delgado said. “So we are confident that once we take some time to mesh back together and start bonding with new players.”

With not only limited time spaces and conflicting schedules many athletes were forced to adapt to new ways of staying safe while practicing which proved difficult for the struggling teams.

“Due to COVID, we were very limited on things we could do on and off the ice,” senior captain Isabella Oldani said. “Getting ice time at the Berry [Events Center] was a hassle in itself, and we even had to get dressed in our full gear in Berry’s parking lot. This went on even in the winter since locker rooms were off-limits. We also had to wear masks while skating, which is more difficult than you would expect.”

With the problems of the pandemic coming down, the team’s looking to replicate their 2019-2020 season and break their way back into nationals. With a cut-off that left a sour taste both before nationals and last year without play, the ‘Cats are ready to prove themselves.

“What I hope is different from last year is that we have the opportunity to travel to opposing teams around the Midwest to compete and eventually, we hope to win our league conference championships again earning a spot in the national tournament, which we did in 2020 before COVID struck the globe,” Oldani said. “Our goal this season is to represent Northern at this national tournament and kick some butt there.”

Hockey is a tough and rewarding sport, it demands commitment both mentally and physically. The ‘Cats spend a lot of time on the road and have to use their free time to make up for lost time in class or on campus. Not only do the players work their hardest off the ice but hockey is a demanding sport and requires a tough player to make it as far as our Wildcats make it.

“It helps me stay more organized and not procrastinate as much, since I have weekends that are going to be dedicated to travel and games and times during the week that get blocked off,” Delgado said. “Hockey is something that really pushes you. Your team, teammates, and opponents all are a driving force to give it your all. It also is something that will whip you into shape. Even if you think you are in top condition, hockey will crush that ego.”