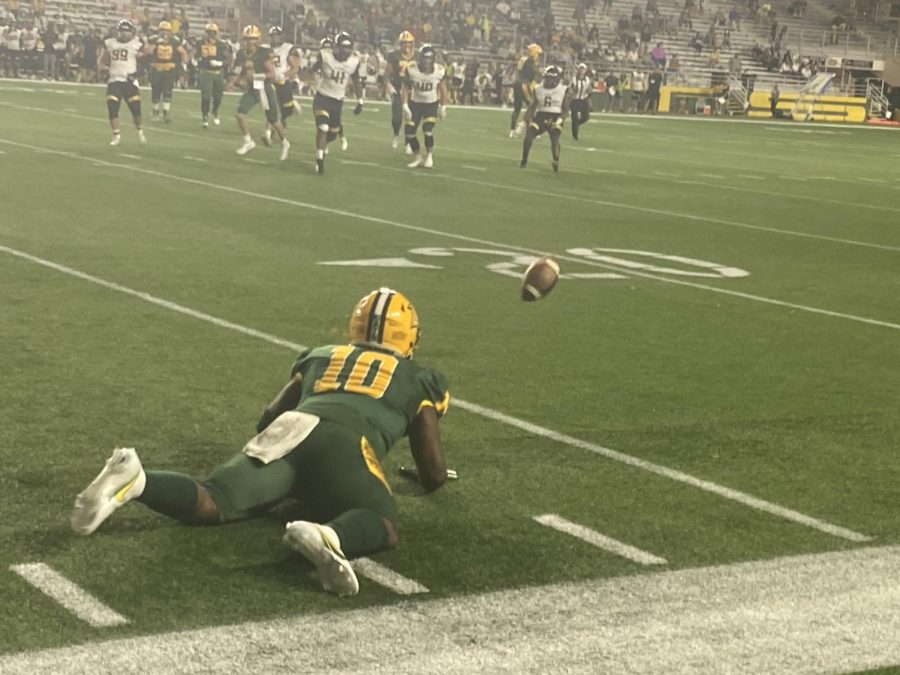 MANY MISCUES—Sophomore running back Tyshon King dives to attempt and catch a pass thrown by sophomore quarterback Drake Davis in NMU's 28-10 loss to the University of Wisconsin-Oshkosh on Saturday afternoon. Travis Nelson/NW

Playing the 11th-ranked team in all of Division III is already difficult enough of a task, but self-inflicted mistakes got in the way of the NMU Football team on Saturday afternoon in a 28-10 home loss to the University of Wisconsin-Oshkosh.

The Wildcats (1-1) committed 11 penalties in the first half, with 16 total for the game. NMU moved the ball in the game’s early minutes but was forced to punt on its first three possessions after big plays were getting called back by penalties. In the grand scheme of things for the season, Head Coach Kyle Nystrom hopes that his team learned a lesson.

“It was brutal [the penalties], I mean they [UW-Oshkosh] were good today, I knew they’d be a good football team,” Nystrom said. “I knew we were in for a real knockout, drag out. I felt good about the preparation, we were ready mentally, when things didn’t go our way we started making it worse with the penalties and you can’t do that. You’ve got to focus on being perfect and trying to win a play at a time and not make it worse for yourself, and we didn’t do that.”

UW-Oshkosh (2-0) took advantage of the Wildcats’ miscues and raced out to a 14-0 lead early in the second quarter with 60-yard and 58-yard scoring drives. Both were capped off with sophomore quarterback Kobe Berghammer touchdown passes, one to senior tight end Justin Kasuboski from 14 yards out, and the other to freshman wide receiver Trae Tetzlaff for a 13-yard score. With under four minutes left in the half, senior running back Mitch Gerhartz walked into the end-zone from one-yard away, extending the Titans’ lead to 21-0. NMU’s offense started showing life with big plays from sophomore quarterback Drake Davis with his scrambling ability and passes to wide receivers junior Benjamin Loutsis and freshman Wyatt Davis. With under a minute left, the drive stalled and junior kicker Daniel Riser drilled a 35-yard field goal to get Northern on the board.

UW-Oshkosh got the ball to start the second half, and immediately drove downfield on the NMU defense. However, the Titans couldn’t convert on a third down inside of Wildcats’ territory, and junior kicker Jayden Haag pushed his kick wide right on the next play. The ‘Cats carried that momentum into its next drive that ended with a 27-yard touchdown pass from Davis to Loutsis, cutting the deficit to 21-10 with just under six minutes left in the third quarter. Northern got the defensive stop it needed, and the offense responded by getting across midfield into Titan territory. However, big third down conversions that followed were nullified by penalties, and any momentum NMU had was gone with another punt.

“We started coming back, back into the game and we couldn’t make plays on defense to just get off the field as fast as we needed to or as much as we needed to,” Nystrom said. “That’s the bottom line, and then we just kept taking penalties. We’d get out and Drake [Davis] had a good scramble for a first down and we got two penalties on a play. So there goes that opportunity right? We weren’t good today, we weren’t good today. We’ll have to do a better job of developing them and getting them to understand how to persevere through adversity, we’re just going to have to do a better job in that department with them.”

The Titans put the game away for good following the punt with a 14-play, 80-yard touchdown drive capped off with a one-yard touchdown pass from Berghammer to Kasuboski for their second scoring connection of the game. Down by 18 with just over eight minutes remaining, the NMU offense stumbled, and the game came to an end. Berghammer went 16-26 for 168 yards and three touchdowns in the air for UW-Oshkosh, and he led the Titans in rushing with 14 carries for 61 yards. Sophomore wide receiver Tony Steger led the way with three receptions for 41 yards, and senior linebacker Nick Noethe had five tackles and a sack defensively.

Davis finished 7-14 for 47 yards and a touchdown, and also led his team in rushing with 12 carries for a net total of 58 yards for NMU, and Loutsis had four receptions for 30 yards and a touchdown. The ‘Cats were outgained 359-175 in total offense, 24-8 in first downs, and had eight less third down conversions. Nystrom said there’s film to be watched in order to improve, but the X’s and O’s weren’t what he was most concerned about.

Coming in, the teams were about even as far as skill set and talent level, Nystrom said in his opinion. He also thought his team would have better speed, but they had to have been doing everything else right that to go their way, he added.

“I think if we did everything right, we could match up,” Nystrom said. “But when you get 375 penalties in a game and you can’t protect the quarterback the way you need to or you can’t tackle the quarterback on power read and things like that, you’re not going to get what you want done.”

Now with another home game coming up at 1 p.m. on Saturday, Sept. 18 against Davenport University, it’ll be a short period of time to find out how much the Wildcats can grow until then.