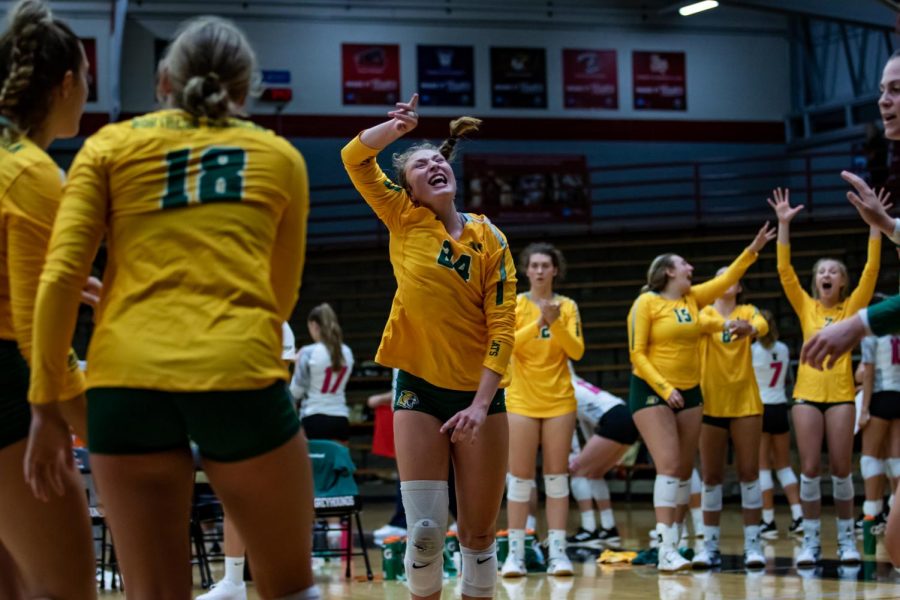 PUSHING FORWARD—Freshman setter Caylie Barlage celebrates a point for NMU last weekend in the Indianapolis Tournament. She had a lot more playing time than expected due to the injury of junior setter Lauren Van Remortel. The 'Cats look to have everyone healthy for the three upcoming home GLIAC matches. Photo courtesy of NMU Athletics.

It was a challenging beginning to the start of the season for the NMU Volleyball team, starting 3-5 in the non-conference after playing in two competitive tournaments.

Five losses seem like a lot for the defending GLIAC champs for a team that didn’t come up short very often in the spring. One would think that if you didn’t factor in the different types of adversity that this team has had to persevere thus far. Senior libero Alli Yacko broke her collarbone in the preseason and is out for the year, junior setter Lauren Van Remortel hurt her ankle in the first tournament and missed the second one in Indianapolis.

Head Coach Mike Lozier said in his Tuesday press conference that four players were sick with cold symptoms (negative for COVID-19), and couldn’t travel with the team this past weekend. On top of all of the health issues this team has had to overcome, the pressure of being defending GLIAC champs has gotten to his team a bit, Lozier admitted. Going forward there are improvements needed on the court in certain areas because there always are this early in the season, but Lozier is looking at how his young team has handled this adversity.

“We didn’t really face adversity last year, we stayed healthy both with sickness and with just our bodies stayed healthy,” Lozier said. “We won a lot, we won the conference, right? We won the tournament. So we didn’t really have that, maybe you could say getting our butts kicked at [Michigan] Tech last year was something that was kind of like, ‘Oh crap, we’re really not the best team in the world’. This is a new, foreign feeling for a lot of these athletes. So to learn how to deal with that failure and not let it overwhelm you is really important, and I thought we did that this preseason.”

Despite having to navigate these tough waters, once Van Remortel gets cleared to play again, Lozier thinks that the team will have turned the corner. Of course, Yacko won’t be back at all this year, but the hope is that the remainder of the team can stay healthy as conference play starts up this weekend. The ‘Cats only have eight home matches all season, and three of them are coming up on Friday-Sunday against Ferris State University [FSU], Grand Valley State University [GVSU] and Davenport University [DU].

All three opponents were projected in the preseason poll to be the top three teams in the GLIAC South Division, so NMU has its hands full for an interesting three-day weekend. With hopes that a lot of the early adversity is coming to an end, Northern enters this weekend with a clean slate of 0-0 in conference play along with everyone else.

“To be able to play at home in front of a hopefully packed crowd this weekend is really exciting, our team is very excited about that,” Lozier said. “It’s fun because really, I think the three teams that we’re playing are three of the best teams in the conference. We only see them once this year, so to do it at home [on] opening weekend, I think is an advantage for us. I’m really excited, there are some new additions to Vandament [Arena], we got new video boards, there are a lot of really cool things happening within this program and honestly, there’s just excitement about being able to sleep in our own bed.”