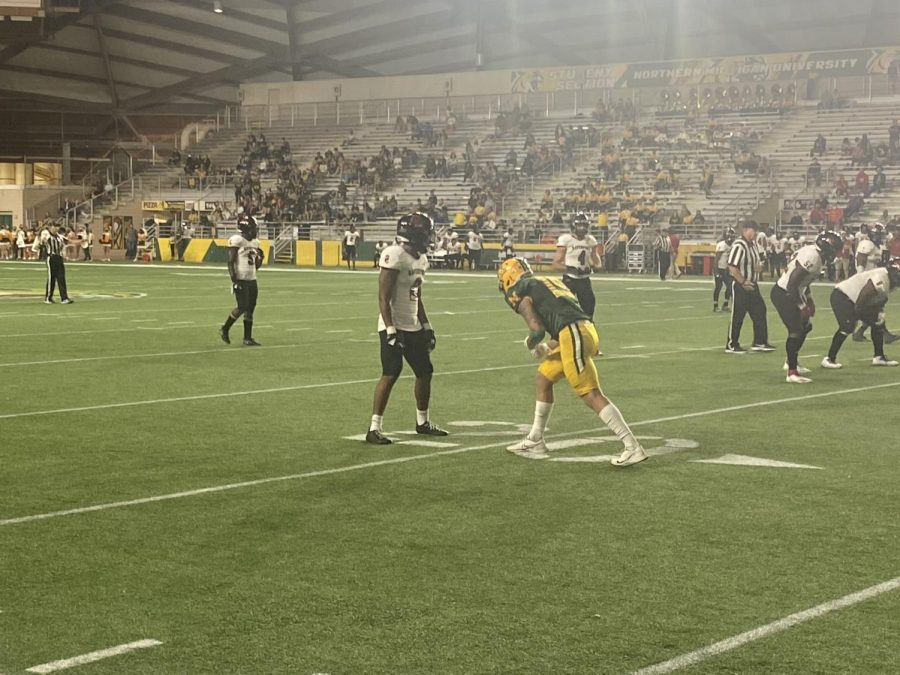 WINNER, WINNER—NMU wide receiver Wyatt Davis lines up on the outside during Saturday's 20-14 win over Davenport. NMU is now 2-1, and will begin conference play next weekend. Travis Nelson/NW

The NMU Football team rebounded after last week’s disappointing result with a 20-14 victory over GLIAC foe Davenport on Saturday afternoon.

The three-headed offensive trio of quarterback Drake Davis, running back Tyshon King and wide receiver Benjamin Loutsis led the way for NMU (2-1) to pick up its second win of the season. Davis went 17-28 passing for 176 yards, two touchdowns and one interception, and added 14 carries for 132 yards and a touchdown as the Wildcats’ leading rusher.

“He’s ad-libbing, that’s him dropping back and taking off,” NMU coach Kyle Nystrom said. “He’s been doing that since he was in high school and that’s why we liked him so much. But that’s what he did in high school, if things would break down he’d take off and hurt the defense. So he does that and he’ll still throw on the run. He’s playing better, he’s been off for a long time. I’ve been supportive of his time to adjust because it’s been a long time since he has stepped out on that field and he gets better every game.”

King also had a nice day on the ground averaging 6.5 yards per carry with 15 carries for 97 yards. Loutsis caught seven passes for 97 yards including a 25-yard touchdown from Davis in the second quarter.

“Benny Loutsis played like I’ve wanted to see Benny Loutsis play for five years,” Nystrom said. “What he did today, that’s what he can do. He just needs to keep doing it because he’s that guy, he can do that.”

This game looked like it was going to be a shootout in the first quarter with both teams scoring two touchdowns each. Davenport scored on the first drive of the game with 11:31 left in the first after a four-yard touchdown run from quarterback Deondre Ford. NMU answered back quickly with a 25-yard strike from Davis to Loutsis at the 8:08 mark.

The Panthers marched down and scored with 2:29 left in the quarter with a nine-yard run by running back Kyshawn Richards. NMU responded with an explosive 55-yard touchdown run from Davis, who “ad-libbed” once again and dashed into the end-zone with 20 seconds remaining in the first quarter. Kicker Daniel Riser’s extra point was blocked by Davenport, so the Panthers kept a 14-13 lead. The Wildcats had a family connection for the game-winning touchdown, as Drake Davis threw a 27-yard pass to his brother Wyatt Davis with 12:17 left in the third quarter.

DU wasn’t able to score the rest of the game after the big first quarter, and that is a testament to the Northern defense for battling as the game went on. Cornerback Antonio Howard intercepted Ford in the second quarter, and the ‘Cats defense sacked the quarterback twice. Injuries to the secondary resulted in cornerback Kobie Jamison making his first start, and safety Josh Shodipo having to shift over to cornerback. Davenport had one drive with serious momentum late in the fourth quarter, and the Wildcats stopped them on fourth-and-five at the NMU 18-yard line to take over with 3:24 remaining.

“We had some hiccups to burp out and get some guys playing, but they got more confidence as they went through the game,” Nystrom said.

After having 17 penalties last week in the loss to Wisconsin-Oshkosh, NMU cut them down to only eight this week. The ‘Cats also surpassed 400 yards of offense (402) and held Davenport under 300 yards with a banged-up defense. NMU’s two linebackers Will Borchert and Andre Whitley had double-digit tackles with 12 and 11 respectively. The team took a step in the right direction but there’s more room for improvement, Nystrom said. With the rarity of this season, this game was a non-conference match-up. These two teams will square off at Davenport on Saturday, Oct. 9 that will count for the conference standings. Now with conference play officially beginning next week on the road against Northwood, the Wildcats’ focus will quickly shift to the Timberwolves.

“Well we’ll be happy for 24 hours and then we’ll put it away and get ready for Northwood,” Nystrom said. “I’ll be chomping at the bit like nothing good has happened to me by probably 5:00 Sunday. Because I’ll meet with the team in the afternoon and get them on their way, and then it’ll be time to break down Northwood and get ready to go down there next week.”

NMU played like a team that deserves 24 hours to celebrate, and it’s the first time the Wildcats have defeated a conference opponent since winning at Wayne State on Nov. 3, 2018. Northern’s defense bent but didn’t break, and got the biggest stop of the game when it needed to.

“Well we played so bad against Oshkosh, and they [NMU] came back and made some things right again,” Nystrom said. “That’s what we said we needed to do, and we played hard, we played pretty physical. We missed a few tackles here and there, we covered pretty well. Bottomline as a group though, they took the wrong from last week and made it a right today, so I’m very happy for the players and I’m proud of them. I congratulated them, that was their win today.”