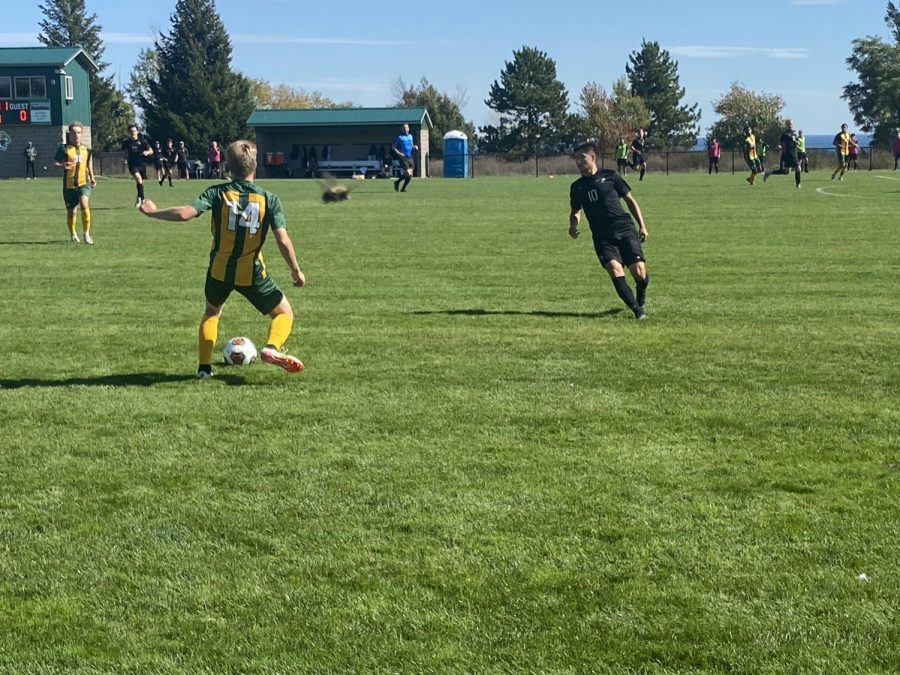 FIRST OF MANY—NMU defender Noah Eklund possesses the ball for the Wildcats during Friday's 1-0 win over Purdue Northwest. The 'Cats return to action at home against Davenport at 2 p.m. on Sunday. Travis Nelson/NW

The NMU Men’s Soccer team picked its first win of the season in a tight 1-0 home win over Purdue Northwest on Friday afternoon.

The Wildcats (1-3-2, 1-1-1 GLIAC) got off to a hot start with several opportunities to score in the first 10-15 minutes of the game, Head Coach David Poggi said. However, making some key substitutions gave the ‘Cats an edge to eventually take the lead.

“I think that’s what frustrated me the most in that first half, is that we looked flat after that first 15 minutes,” Poggi said. “Then [we] made a couple of changes, and guys came in and kind of picked up the tempo a little bit.”

Northern was finally able to capitalize on its chances with the game-winning goal from midfielder Maxime Doutre at the 59:41 mark. Purdue Northwest (3-3, 2-1 GLIAC) had opportunities to tie it up, including a free kick with 3:37 left in the match by midfielder Isaiah Nieves that sailed over the goal out of bounds.

“It makes for a beautiful day, right? I mean, it’s a beautiful day to be a Wildcat,” NMU head coach David Poggi said. “It’s good. They deserve it, there were a lot of things that happened up until now in terms of the matches that we played in and the results that we got. It didn’t favor us for whatever reason in those opening games, and I think today’s game is a little bit of a bonus for us. Purdue Northwest is a good team and they’re a hard team to play against. They were unlucky a couple of times, and a win will give us a little bit of confidence and maybe it will continue so we can continue going forward.”

Northern outshot Purdue Northwest 12-11 and 5-3 on goal, which proved to be the difference in the hard-fought game. Doutre led the ‘Cats with two shots on goal, and midfielders Ryan Palmbaum and Kaffie Kurz, and forward Markus Sandstad each picked up one. Nieves, midfielder Ryan Moran and forward Pau Aran each had a shot on goal for the Pride, and their goalkeeper Sebastian Contreras saved four of NMU’s five shots. Wildcat goalkeeper Alex Weaver had three saves in net for NMU and gave the team its first shutout of the year.

“I think the good news about today was that we defensively came out and kept a clean sheet, and didn’t get scored on,” Poggi said. “I think that’ll be a good thing going into the game on Sunday.”

This year’s NMU squad is playing young talent on a regular basis, and the veteran players are still trying to find their way in the pecking order, Poggi said. This is resulting in some growing pains that the team is having to work through. Now, with another game this weekend against Davenport on Sunday, Poggi knows what he wants to see happen.

“I want to improve on how we manage the ball,” Poggi said. “I think there were times where we just gave it away and some of the times we just lost our ideas on what we were going to do, and some of the time they just did the opposite of what I told them to do.”

NMU will look to get its second conference win of the season against the Davenport Panthers at 2 p.m. on Sunday.