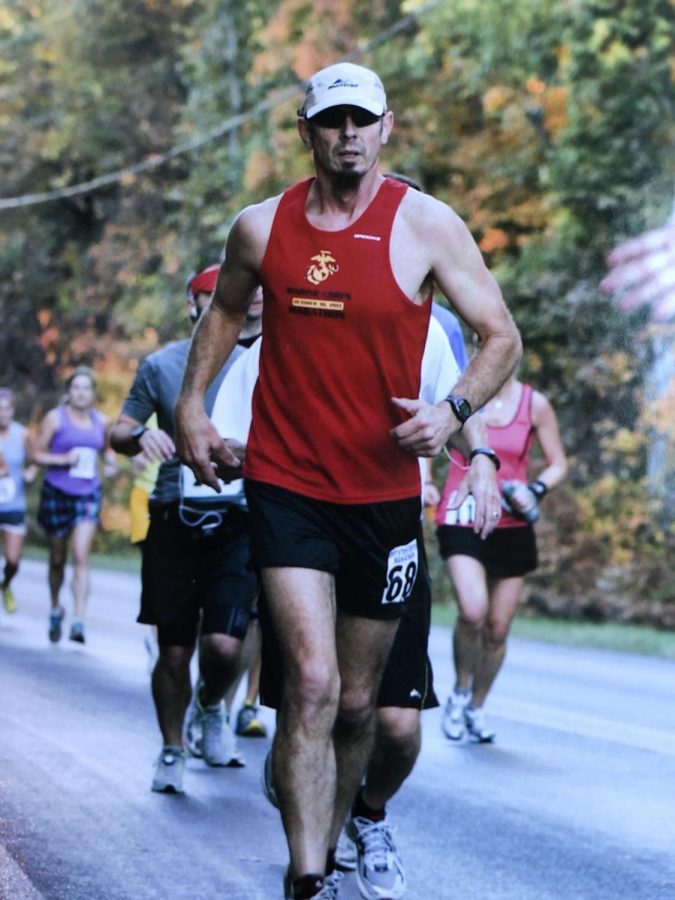 MANY, MANY MARATHONS—James Engel has now run 219 marathons after his latest at the Marquette Marathon on Saturday, Sept. 4. It was a special one for the former NMU football player being greeted by current Wildcat athletes at the eight fuel stations. Photo courtesy of James Engel

James Engel was nine years removed from his college football playing career as a two-time letter-winner at defensive end for NMU from 1974-77. His athleticism was on display at the 1987 Great Lakes State Games in Marquette, winning two gold medals and two bronze medals in various track and field events.

He let a few other athletes know about him medaling four times in his events, but them not medaling in theirs. They didn’t take kindly and told Engel that he couldn’t do the upcoming triathlon. He participated in the triathlon. Come to find out, he doesn’t take “you can’t” very kindly.

“The next challenge was, ‘well, you can’t run a marathon,’” Engel said.  “I didn’t even know what a marathon was or how far. I don’t like people telling me what I can or can’t do athletically at that time in my life and I said, ‘when’s your marathon?’ They just happened to say Grandma’s Marathon in June. So in June of 1988, I ran what I thought was my first and last marathon of my life.”

At a wedding reception later that night, Engel was told he couldn’t run the Boston Marathon. He had to run an hour faster than he did in Duluth, Minnesota for Grandma’s, and he really had no idea what it was going to take. He decided he would do it, and in 1993, ran a qualifying time.

Since running his first marathon 33 years ago, Engel was dead wrong about it being his first and last. He’s now run 219 marathons, having raced in Grandma’s Marathon 34 straight times since his first one, and has run in four Boston Marathons.

Running has taken Engel all over the country, he said. To Boston, to Washington, D.C. for his favorite marathon, the Marine Corps Marathon, and all over the Midwest. Most importantly, he’s gotten to meet crazy people like himself, he added.

“It was a tremendous struggle because you’re talking to an old ex-defensive end where the only important distance to run was 40 yards, let alone 26 miles plus,” Engel said. “It became a real struggle but somehow it became a pleasurable struggle.”

Engel’s 219th marathon was on Saturday, Sept. 4 at the Marquette Marathon. This one was very special to him because each of the eight fuel stations was occupied by NMU athletes. This lit up the eyes of Engel, and he didn’t hesitate to offer them encouragement and some words of wisdom, he said.  Among the advice was to practice hard and attack every practice with enthusiasm, and that time waits for no one.

“It was an absolute pleasure, it was a tremendous honor to be able to talk to them,” Engel said. “Each station I tried to offer a little insight into how short their athletic careers are and to enjoy every day and to work harder than they think they’re working because I told many of them, ‘the only thing left after your college career is to become a marathoner.’ I think that motivated some of them to think, ‘yeah, we better work harder at practice, we don’t want to be a marathoner. Look at these people, this looks hard.’”

Engel is now a retired teacher and coach in the Wakefield-Marenisco School District, having coached at a few different schools since graduating from NMU in 1978. However, you could almost say that he’s a full-time marathoner. In fact, he’s already got marathons 220-223 scheduled through January. On Saturday, Oct. 9, he’ll be at the WhistleStop Marathon finishing in Ashland, Wisconsin. He then will travel to Washington, D.C. for the Marine Corps Marathon on Halloween, then will be in Little Rock, Arkansas on Saturday, Nov. 25. For now, in his packed running schedule, it runs through Sunday, Jan. 16 where he’ll be down in Louisiana for the Louisiana Marathon.

When Engel said that marathons take him all around the country, he meant it. What he also takes with him, is love for his time spent at NMU as a student-athlete.