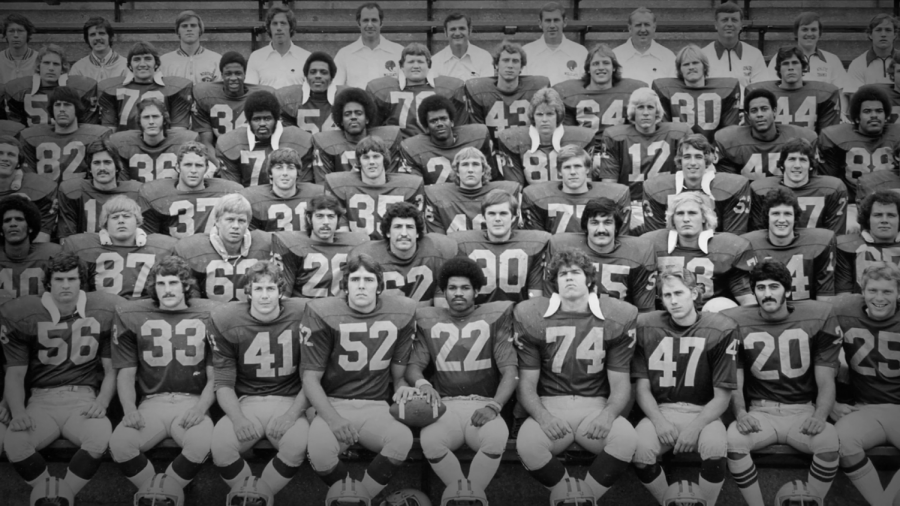 Courtesy of Scot Fure, "Put Your Hand On The Line"

UNLIKELY CHAMPIONS - The 1975 football team made the ultimate comeback after losing every single game the year before. The documentary "Put Your Hand On The Line" captures their story and the hardships they encountered to win the title of National Champions.

In 2015, NMU’s 1975 football team gathered for their 40th reunion and reminisced on the days when they surprised everyone, including themselves, when they clinched the title of 1975 NCAA Division II National Champions.

In 1974, the football team lost every single game they played and ended the season with 10 losses and zero wins. The following year, they turned around and won 13 of the 14 games they played that year, including the National Championship game against Western Kentucky.

“When you’re talking about that whole situation, we were winless and then national champions,” Brian Adams, player from ‘72 to ‘76, said. “We were the only team that has ever done it. It was fate.”

This historical comeback survives in the stories of those who lived it, but the players started talking about collecting their stories and preserving them for their families and future generations.

Jack Hirn, a freshman punter on the ‘75 team and one of the players at the reunion, was part of the initiative to begin recording a documentary and received lots of support from his former teammates, including financial donations.

He started collecting contact information from interested players from the ‘74 and ‘75 teams, and then brought his friend Scot Fure who had a small production company in Marquette onto the project to help interview and direct the documentary, “Put Your Hand On The Line.”

Fure, director of “Put Your Hand On The Line,” had worked at the North Wind newspaper as a freshman sports reporter in 1975 and had interviewed many of the players during their championship year.

“I lived the story,” Fure said. “I was writing feature stories on a lot of these players as a 19-year-old sports writer with my first job out of the North Wind … it was incredible because you don’t really realize what you are seeing. You don’t know the outcome or the end of how big it would become.”

For the next two years, Fure interviewed former football players, collected pictures and searched through databases for old footage of games.

“Scot did great job. He was a sports writer back then so we knew him,” Adams said. “He had us get some memorabilia out so you could see some of that in the background. And he asked a lot of the good questions that were pertinent towards how we got there. It is a miracle story … It was humbling.”

Many of the players were more than willing to share their memories and relive some of their proudest college moments. The images were so clear in their heads, it was as if their team had won the championship yesterday.

“The players were so emotional, you can see some of them crying. It was just like the story would bubble up from their skin like they had just played,” Fure said. “There’s a lot of good pieces to pick from.”

At the end of his interviews, Fure had 25 hours worth of footage to cut down into approximately 46 minutes. He was able to piece together a powerful story with his interview footage, but he struggled to find other visual aids to include in the documentary.

“I had very little visual assets,” Fure said. “We were fortunate to find the championship game at Western Kentucky. They had it in their archives so we were able to find that, but the challenge of the visual assets was probably the most overcoming. But I think because [the players] were so compelling and they were so engaged … the expression and the passion in their face helped not make it seem like it was missing anything.”

As the “Put Your Hand On The Line” documentary began to develop, Fure and others began to realize that this story was powerful and deserved to be shared to a larger audience than just the players’ friends and family.

What started out as a collection of videos to commemorate a shared experience and history, grew into an hour long documentary partially funded by former NMU President Fritz Erickson and shown at film festivals around the world.

The powerful message and unique comeback story resonated with viewers who had never heard of NMU. “Put Your Hand On The Line” won the Audience Award for Best Documentary at the Central Michigan International Film Festival, a Silver Remi award at the 2020 Annual WorldFest Houston, and the Best Inspirational Documentary in France, said Hirn.

“My whole family went [to the CMIFF] and they were excited for me and they thought it was a great thing,” Mike Berry, player from ‘75 to ‘76, said. “They didn’t realize how instrumental I was and I don’t like to talk myself up, but … my daughters, my son were like ‘Dad, I can’t believe we were there, we were little kids’ but my wife got to see all that happen. We went home with a real good feeling about the whole thing.”

The documentary is still being shown at film festivals and Hirn is looking into potential deals to make “Put Your Hand On The Line” a full movie. While those conversations are in progress, the documentary is not available to the public, Fure said. Once a deal is reached and released on a streaming platform, NMU’s Alumni Relations will be able to send out information to those who are interested in watching the documentary or sharing it with their friends and family.

NMU has hosted a few showings of “Put Your Hand On The Line” free of charge to the public. Most recently, the documentary was screened Saturday, Oct. 2 for homecoming weekend. Over 100 people, mostly alumni, showed up to watch the film.

This showing was especially powerful after the passing of head offensive coach, Buck Nystrom, the week before on Sept. 25. Nystrom was 88 years old and played an integral role in the championship win for the ‘75 football team.

Many of his players attended NMU’s 2021 homecoming celebration to watch the documentary and remember one of their influential coaches.

“[Nystrom] was instrumental to all of us. I wasn’t an offensive lineman, but he was a coach and he did the conditioning and we really respected and loved him,” Berry said. “His passing, I took it hard, I could not believe it … it feels a little weird to be here right now that he’s not with us and us teasing him a little bit.”

The team is still close after all these years, bonded together through shared experiences, lows and highs. “Put Your Hand On The Line” captures a lot of their team dynamic, as well as the struggles they went through to get to NMU’s championship winning football team.

“Their story goes beyond football,” Mike Colaco, player from ‘76 to ‘79, said. “Life is hard and we all deal with how hard life can be sometimes … but you can never give up. You never know how close you are to enormous success. Look at these guys. They went from losing every game to being national champs … it’s really a metaphor for life and that’s what’s so beautiful about this documentary.”