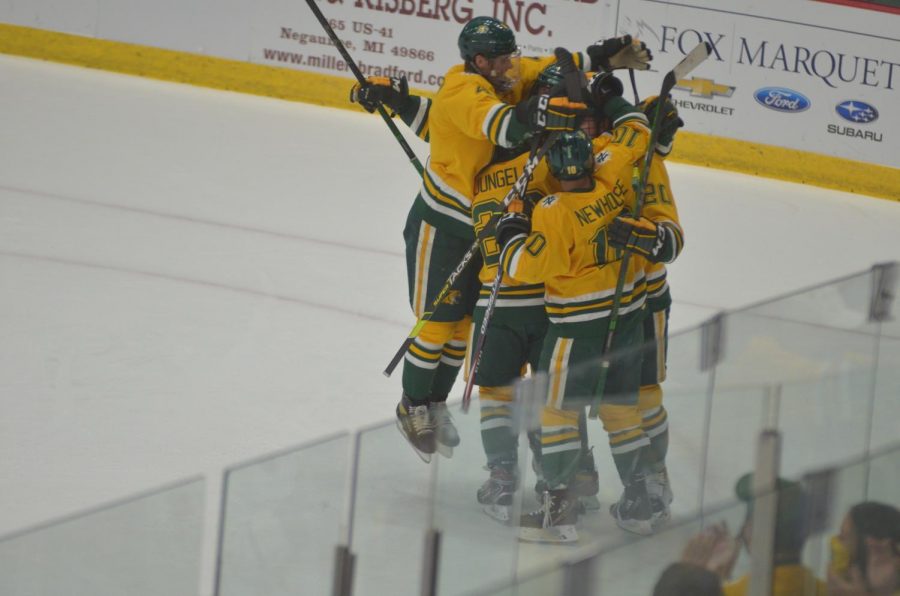 SWEET, SWEET SWEEP—The team celebrates after forward Connor Marritt's first career goal put NMU in front 2-1 in the first period of Saturday's win over St. Thomas. The 'Cats averaged six goals per game on the weekend, and are looking good to start the season. Travis Nelson/NW

The Northern Michigan University hockey team had high hopes going into this season for its offense. It’s hard to sustain, but averaging six goals on a weekend is how the ‘Cats swept the visiting University of St. Thomas this past weekend. The Wildcats took home 4-1 and 8-3 victories over the newest team in Division I hockey, and earned six points in the first conference games of the season.

It was well-known that NMU would be relying on its experienced players alongside the four-man transfer class. Two of them- forwards Hank Crone and Hampus Eriksson- played on the second line along with junior forward AJ Vanderbeck. Each of those three had four points on the night, with Crone and Vanderbeck each scoring two goals and posting two assists, and Eriksson had four assists. For Crone, it was his first two goals in his NMU career.

“Anytime you score at a new place, it’s special,” Crone said. “Obviously, I had relationships with players on the team even before being here. So just seeing that and seeing how special the group is and how excited really everyone is, no matter who it is that scored. So yeah, it definitely felt good.”

The line didn’t have a great game on Friday, both Vanderbeck and Crone, and coach Grant Potulny all agreed. However, Saturday was a bounce-back game, and it really displayed how much depth that this team has.

“I think the first couple games, the [Hampus] Eriksson line, they looked so good in practice and they had a bunch of puck possession, but they just weren’t able to get to the interior,” Potulny said. “On the video this morning [Saturday], I’m sure there are a couple of things that the three of them, they’re proud guys, didn’t enjoy seeing themselves. I think they can be a legitimate #1 line in college hockey. To get them to have the night they did if they can continue, I thought the [Joseph] Nardi line just was off, and that’s going to happen. To be able to win and win in that fashion without any goals from the Nardi line, that just speaks volumes to the depth of the team and how far we can go if we can continue to clean the defensive end up.”

The fast-paced scoring started quickly for NMU with Vanderbeck knocking in a rebound 1:29 into the game. Crone and forward Alex Frye had assists for the ‘Cats, beginning the preview to what the night would look like offensively. It took over six minutes into the game for the Tommies to get a shot on goal, but forward Kyler Grundy got the opening shot past NMU goaltender Rico DiMatteo to tie it up at 6:25 off assists from forward Matthew Jennings and defenseman Kimball Johnson. Nearly seven minutes later off a scrum in front of the net, Wildcats’ forward Connor Marritt scored his first career goal at 13:18 assisted by Garrett Klee and Jett Jungels.

Northern looked to be in firm control, but the game flipped when defenseman Michael Van Unen was given a five-minute major game misconduct for a hard hit to the head of UST forward Christian Versich. The Tommies capitalized with 14 seconds remaining in the first period with Grundy’s second goal of the game, assisted by Johnson and former Wildcat Grant Loven. St. Thomas still had 3:25 left on the power play to begin the second period and struck again 28 seconds into the period. Forward Lucas McGregor got the goal with assists by forward Sam Renlund and defenseman Trevor Zins to put UST in front for the first time.

The power play was killed by NMU without giving up another goal, and the ‘Cats struck back at 3:57 on its own power play for Vanderbeck’s second goal of the game. Eriksson picked up his first of four assists of the night along with defenseman Ben Newhouse to tie the game up at 3-3. The second period was quiet relative to the other two, and that score stayed strong heading into the third period.

“I think the bench, the attitude of the bench was always up,” Potulny said on how the team was able to overcome Van Unen’s five-minute major. “Even when they scored, it (the attitude) didn’t falter, it didn’t waiver. Attitude is such a powerful thing, especially in a sporting event because all of the sudden if you’re riding the emotional wave, something that goes the wrong way can affect you for the next 10-12 minutes. I didn’t think any of those goals even affected us, I thought it was just right back to business. Losing Mike was tough because he’s an important player for us, and we ended up having to finish the game with five D (defenseman).”

Crone got his first goal at 1:16 into the period from his line buddies Eriksson and Vanderbeck to put the ‘Cats up for good 4-3. In a span of just over four minutes at 5:33, it happened again with some scorer and passers to extend the lead to two goals. Transfer defenseman Trevor Cosgrove scored his first goal as a Wildcat, giving NMU a 6-3 lead at the 6:00 mark off a pass from forward Andre Ghantous. Forwards David Keefer and Rylan Van Unen got in the action in the game’s late stages at 13:34 and 18:30 to put the icing on the cake.

Even with a 4-1 victory in the first game, NMU had to make necessary improvements to come out and put up the statistics that the team did. Northern outshot UST 41-18 and it made for a tough night on Tommies’ goaltender Peter Thome. However, it wasn’t necessarily just the offense that made strides.

“The two things for me, I thought even though we gave up two penalty kill goals, I thought that was good,” Potulny said. “We only gave up one shot in the third period, we defended very well tonight. Listen, Rico (DiMatteo) saved our bacon a bunch of times (15 saves), and I’m sure that he’d like to have those first couple back. But the way we defended and the ground game, the ability to stay with that. We didn’t want to stay with it last night, we wanted to score off the rush and we wanted to make some plays with our sticks instead of our feet.”

The Wildcats will look to build off of the first weekend’s results returning back to the Berry Events Center next weekend hosting the U.S. U-18 development team on Friday, and the Notre Dame Fighting Irish on Saturday.