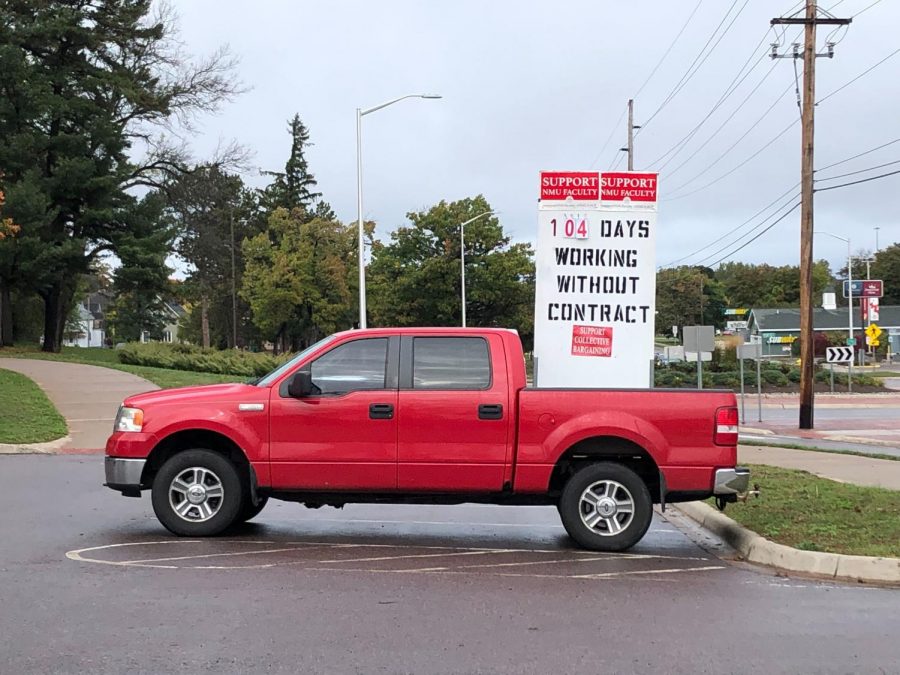 Since July 1, 2021, AAUP has been without a contract. Faculty union members have been working under status-quo conditions based on the collective bargaining agreement signed in 2020 for the COVID-19 pandemic.

Within the agreement, faculty union members agreed to take large cuts in compensation to support NMU during the COVID-19 pandemic. These cuts were seen in summer pay, overload pay and professional development funds.

“Part of the problem lies in the fact that throughout the initial months of negotiations, the faculty union
made significant movement as financial offers were being traded back and forth,” NMU-AAUP wrote in their Oct. 7 press release. “The administration made very little movement, often just moving money from one part of the contract to another instead of adding money to the offer.”

Recent reports stated that AAUP and NMU administration have reached a tentative agreement, however, those reports would later turn out to be false from the Oct. 7 press release issued by AAUP.

“Recent reports that NMU’s chapter of the American Association of University Professors (NMU-AAUP,
also known as the faculty union), and the NMU administration have come to a new tentative agreement
regarding contract language are false reports,” AAUP wrote. “Statements suggesting that the faculty are finally satisfied with what the administration has offered are grossly inaccurate.”

“You ask how we are feeling. When I go to those faculty meetings, I am disheartened by the amount of negativity. I understand it, but I am disheartened about it,” Barch said. “I worry about the impact that it is going to have on the quality of instruction at this institution, which to me ultimately is a failure of leadership because [the Board of Trustees] have the ability to make that go away if they choose to allocate funds towards instruction. And instead, they are allocating funds towards new initiatives or whatever they are prioritizing.”

According to the Oct. 7 press release, NMU faculty were surveyed after the tentative agreement was voted down on Sept. 30. Results from the survey created new conversations between AAUP and NMU administration.

“The union was pleased in NMU administration’s willingness to move on a couple of important items; however, this movement did not result in a new tentative agreement,” AAUP wrote. “Again, news reports that it did are untrue.”

AAUP wrote in the press release that after being surveyed again on Oct. 5 to determine if this movement would be accepted, faculty made it clear that they continued to feel insulted by the administration who wanted to make several of the COVID-19 related financial sacrifices permanent.

“Further, the outstanding financial status of the university, the large increase in enrollment of our current freshman class, and the increased funding that has been announced at the state level have led the faculty to believe that now is the time to focus on delivering a base pay raise package that at a minimum keeps up with inflation and cost of living increases, but more importantly moves us away from our status of being seriously underpaid when compared to faculty at our peer institutions in Michigan,” AAUP wrote. “This is something that the previous administration was unwilling to do and it remains to be seen if the new administration will either.”

NMU administration later on Oct. 7 issued a statement in response to the AAUP press release.

“Late last Friday afternoon the administration and the union did, in fact, reach a verbal tentative agreement. Plans were made to edit and finalize the language for signatures and dissemination to the union for review on Monday and a ratification vote to occur later that week or early the next.” administration wrote.

The press release continued saying that Saturday morning AAUP leadership contacted administration about developing a joint press release stating the verbal tentative agreement that was made.

“However, administration was disappointed to learn late Monday afternoon that the agreed upon language would not be distributed to the union for their review and vote,” administration wrote. “Again, we are disappointed but will continue to bargain in good faith to reach an agreement.”