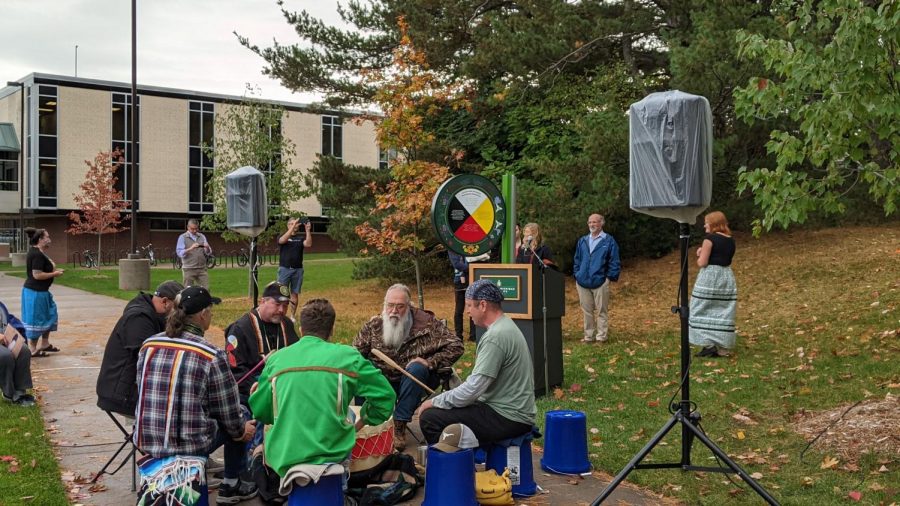 This week marked a long-awaited event on campus: the second annual university-recognized celebration of Indigenous Peoples’ Day, and the placement of a land acknowledgement on campus. In light of this development, key members of the Center for Native American Studies, as well as the Native American Student Association, remembered how much work has gone into Indigenous movements on campus throughout NMU’s history.

April Lindala, an NMU alumna and current professor in the CNAS, was present to observe much of NMU’s often contentious relationship with recognition of Indigenous peoples. When the Center for Native American Studies was approved in 1996, Lindala was a student and full-time employee at WNMU-TV on campus.

In 2016 NMU introduced the first Native American Studies major in Michigan, but back in 1996 Indigenous issues did not receive the same attention.

“I do not think that the NMU campus overall was as widely aware of Indigenous issues and Indigenous movements as they are today. There were key individuals advocating for the discipline of Native American Studies, but concern about Indigenous issues didn’t criss-cross the entire campus,” Lindala said. “I feel as though Indian people were, for the most part, still invisible in a lot of ways. That is perhaps why I think the establishment of the Center for Native American Studies was such a significant action taken by the university.”

The history of Indigenous movements on campus stretches back to before the recognition of CNAS. These movements have been ongoing, Lindala said. They tie into a rich and multinational history of efforts towards justice for Indigenous peoples.

Shortly after the establishment of the program, she recalls, there was also a discussion regarding the Marquette High School mascot, the Redmen, which was depicted by a man in Native American headdress.

“The sentiment from both campus and community was tenuous,” Lindala said. “Personally, I felt as though I had to keep my guard up.”

Lindala recalls other influential movements which have occurred on campus during her time at NMU. One such movement was the Decolonizing Diet Project, begun by Native American Studies professor Martin Reinhardt in 2012.

Reinhardt studied the impact of a diet of 25% to 100% of Indigenous foods, as well as an exercise regimen, on volunteer participants from NMU and the Marquette community, according to past North Wind coverage.

“Today conversations about food sovereignty are happening everywhere; there are multiple cookbooks, multiple textbooks, multiple films on the subject,” Lindala said. “I’m not saying we were the first at NMU to open the conversation, but [Reinhardt] was one of the first to examine the importance of tribal foods for tribal people. That whole tribal food sovereignty movement consumed our daily thoughts and practices; it still influences us ten years later.”

Recent events on campus, such as the Virtual Food Sovereignty Symposium and the opening ceremony food at the Beaumier Center’s “The Seventh Fire: A Decolonizing Experience” have continued this legacy.

“Bringing students to community members who live away from campus may not garner the same attention as activities that happen on campus. However, I would like to believe that students who were fortunate enough to be a part of these experiences have kept them close to their heart,” Lindala said.

When NASA celebrated Indigenous Peoples’ Day this year, they conducted a healing march to the ceremonial firesite located on campus. This firesite has its own history, beginning in 2002 when campus held memorials for victims of 9-11. Lindala recalls that multiple faiths were involved in these memorials, but for Native people on campus, smudging was not acceptable.

They went to Lindala’s residence in order to hold their own ceremony, sparking the idea of having a designated space on campus where ceremonial fires could take place for powwows and other events.

NASA president Bazile Panek reflected that marching to the fire site this year was a grounding and healing experience for those who participated.

“Fire is representative of the act of recentering,” Panek said. “In our walk back, we were recentering NASA back to the place we belong.”

In past years, while fighting for the recognition of Indigenous Peoples’ Day, NASA has marched to and from Cohodas Hall in protest.

“Unfortunately, the board felt that this would be too much of a fight; was too different and difficult of an initiative, and ultimately they did not pass the resolution,” ASNMU President Bethany Beavers said in her speech during Indigenous Peoples’ Day 2021. “But, the story does not end there, because the students were determined.”

The resolution to recognize Indigenous Peoples’ Day continued to gain support, but it was not until 2020 when the Board of Trustees ceased to block the movement.

Panek said that it was unfortunate that so much time had to go into the recognition.

Throughout his time on campus as a student and activist in NASA, Panek has observed the shift in community sentiment. He said he often tells the story of one particularly meaningful march back from Cohodas Hall.

“We were marching back, and I had this moment of looking at the students around me. I heard the drums and was looking at all the support there. I remember thinking, this is a turning point. This is going to make it happen,” he said.